Grace's Guide is the leading source of historical information on industry and manufacturing in Britain. This web publication contains 138,961 pages of information and 225,312 images on early companies, their products and the people who designed and built them. 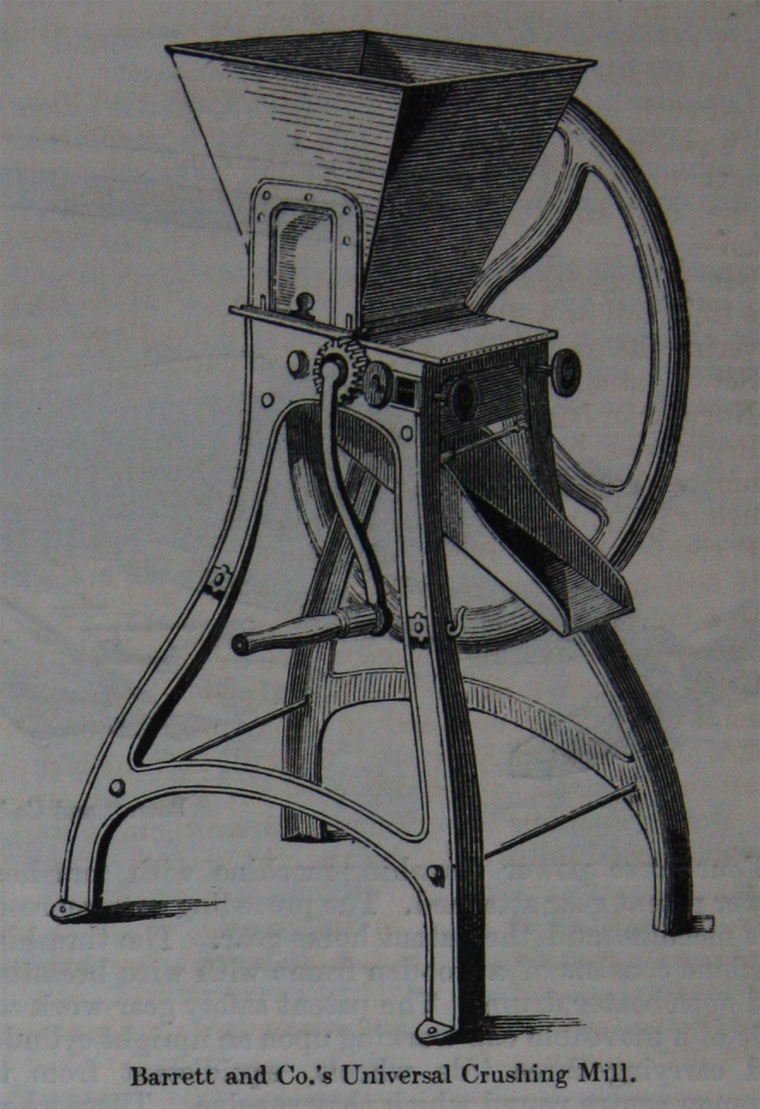 A model of a machine-house with models of steam-engine and thrashing, cutting, and crushing-machinery; with steaming apparatus, pumps, etc., complete, as required for a farm of about 400 acres, with plans for an entire model farm-yard and buildings.

A four-horse power high-pressure portable steam-engine. It is fitted to work expansively from one-third to full steam. The engine is fitted and fixed to a separate cast frame, relieving the boiler from all vibration or strain. The boiler takes about 40 minutes to get up the steam to the working pressure, and requires about 36 lbs. of coals to generate the steam, the water being at 60 degrees to steam at 45 lbs. pressure, and is said to consume about 8 lbs. of coal per horse per hour to keep up the steam. This engine is represented in the cut.

Six-horse power patent bolting and thrashing-machine with shaking apparatus; mounted upon four travelling wheels. The frame of this machine is of wood. The breasting is in a complete iron frame, and bolted to the sides of the machine. The patent consists in the method of altering the breastwork, which is accomplished in one minute. In front of and partly underneath the machine is attached a shaking apparatus which passes the straw from the machine, and at the same time separates all the corn from it. Intended to thrash from 30 to 50 quarters of wheat per day.

Four-horse power thrashing-machine with four-horse power patent gear attached. The preceding cuts represent this machine and the patent horse-gear. The thrashing- machine consists of a wooden frame with wire breastings and open beater drum. The patent safety gear-work consists of a moveable cap working upon an upright cylinder, and carrying three idle wheels, equidistant from the common centre round which they revolve. These wheels are put in motion by a rack on the inner edge of the cylinder, and they communicate motion to an upright shaft, on which are fixed the necessary wheels for getting up a speed of 3 to 11, or any other speed. The upright cylinder contains all the gear-work within itself, so as to equalise the strain and to exclude everything calculated to injure it by the position of the three loose wheels friction is removed from the bearings.

One-horse power patent thrashing-machine with patent safety horse gear. Will thrash by horse-power from 6 to 8 quarters, and by hand-power from 4 to 6 quarters of wheat per day.

Hand-power patent thrashing machine, made entirely of iron, with the exhibitors' new patent breasting. Intended to be worked by manual power. Claiming simplicity of construction, and not being liable to get out of order, and intended to thrash all kinds of grain and seeds with less injury than the common flail.

Barley aveller or hummeller. This machine is for the purpose of breaking off the haulm, which, with the light corn, falls through the wires of a wire cylinder. The good sample is carried through the cylinder, and delivered by a shute at the end of the machine.

Registered cam chaff-cutter, No. 2. This machine is nine inches wide in the mouth, and is made entirely of iron. The straw or hay is drawn to the mouth-piece to be cut by means of two grooved rollers. The mouth-piece is case-hardened, and the machine cuts any length of chaff under 1.5 inches. The cut represents this machine.

Cornes' pattern chaff-cutter, No. 1. This machine is twelve inches wide in the mouth, with an anti-choking top roller, and mouth-piece. It has three knives on the flywheel, and cuts five different lengths of chaff, viz., four for horses, cattle, and sheep, and one four inches long for litter. By the addition of a clutch, the feed rollers can be reversed to withdraw the feed, should any accident happen or any substance injurious to the knives be introduced with the hay or straw.

Cotnes' pattern chaff-cutter, No. 2. The mouth-piece of this machine is ten and a half inches wide. The flywheel has two knives, and it cuts four lengths of chaff. The gearing is so arranged that it may be worked by one or two men or by horse-power.

Universal crushing-mill for hand-power, fixed in an iron frame, for crushing malt, oats, etc., or for splitting beans or peas. The inside of the mill may be easily inspected should any derangement take place.

Universal crushing-mill for one-horse power, to crush all kinds of grain, adapted for either manual or horse power. Requires two men or one horse to work it.

The universal crushing-mill for hand-power, for crushing malt, oats, barley, and linseed, or for beans. The capabilities of this mill are, oats or barley, 4 bushels per hour; linseed, 1 bushel; beans, 6 bushels. Barley by being passed twice through this mill is sufficiently mealed for cattle feed, and if mashed in hot water, for pigs.

The universal crushing-mill, of one-horse power, to crush all kinds of grain, and adapted for either manual or horse power.

Oil-cake mill, No. 2. For the purpose of crushing oil-cake for sheep or cattle. Fitted with sliding bearings to regulate the breaking of the cake to different -degrees of fineness.

Two-wheel plough, marked A G A B. Made entirely of iron, and workable either as a swing or two-wheel plough, the horses going either abreast or in a line. The turn- furrow is made in the shape of a coarse screw, is fitted with the patent round coulter, and with skim coulter to take off the surface and weeds when working in low grounds and stubbles. The draft chain is fitted to the body of the plough. The wearing parts can be easily removed and new ones attached by the ploughman.

Swing plough, marked G. A. B. Made entirely of iron, and adapted to work in woodland countries and upon foul land.

Universal plough. It is a D.P. one-wheel plough, and by the application of a right-handed mould-board, it forms an expanding earthing-up plough. By removing both mould-boards and attaching a bar to the beam, and two hoes which are fitted and supplied with it, it forms a horse-hoe, and thus makes the three implements of one.

Read's patent sub-pulverizer, of which the exhibitors are the proprietors. This plough is readily converted into a mole-plough or paring-plough, by the addition of the requisite shares.

Two-share subsoil plough. The mechanical construction of this plough is simple and light. The under share, which can be shaped as a D or an 0, leaves a drain to carry off the water to the main drains.

The Ducie cultivator, constructed entirely of iron, and fitted with either five or seven tines, which are set so as to draw lines eight inches apart; their curved shape and length prevent their clogging in the foulest land. The frame and tines are raised and lowered by turning a handle.

Set of registered circular harrows. In these harrows the tines follow a different course, and yet all combine in covering the ground at exact equal distances.

Registered hay-making machine, composed of two drums with rakeheads attached, revolving upon a spindle, which is supported by two carrying-wheels.

Portable cavalry forge, constructed entirely of iron, with coal and water trough of the same material, fitted with a fan placed horizontally, out of the reach of injury or inconvenience; it is worked either by the foot or hand.

Grist or corn mill, of two-horse power, adapted for general use. It is enclosed in a cast-iron frame. The stones are of French burr, and the mill is furnished with a cast-metal plate turned up perfectly true for proving the stones, enabling a workman to dress them as well as an experienced millwright, by the old process of wooden staves.

Scotch cart. The body of this cart is made to hold exactly a one-horse load. It combines great strength with lightness.

Improved Scotch cart. The wheels are similar to those of the preceding article.