Grace's Guide is the leading source of historical information on industry and manufacturing in Britain. This web publication contains 138,959 pages of information and 225,312 images on early companies, their products and the people who designed and built them. 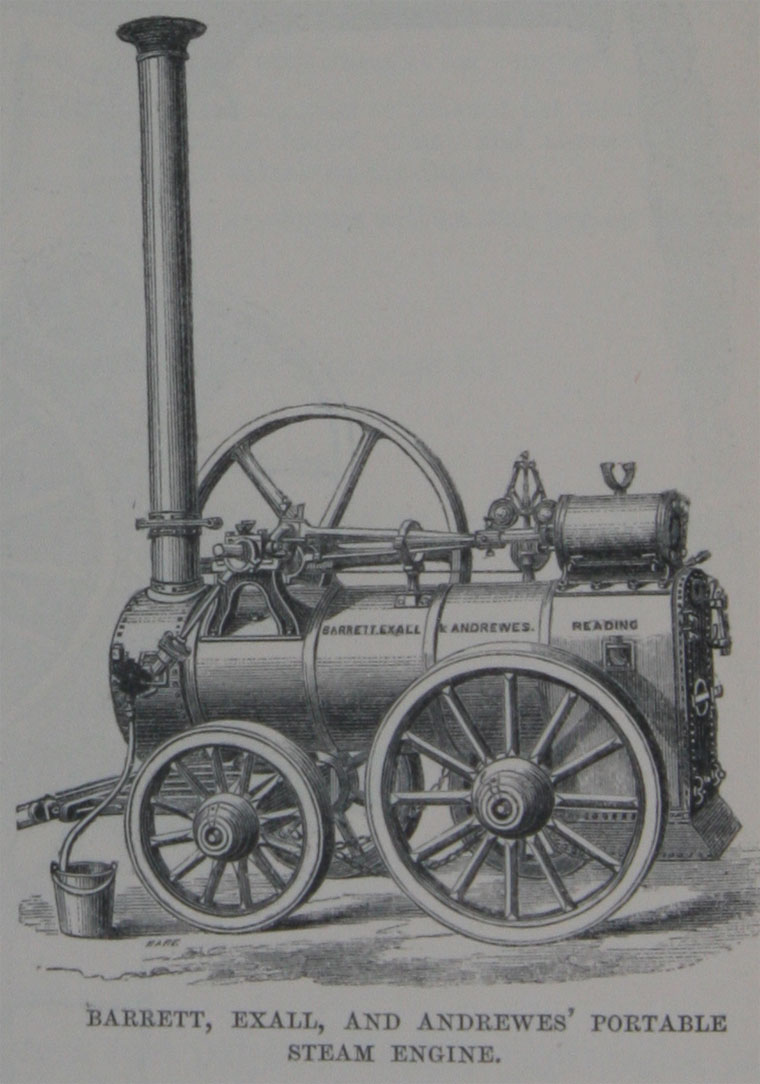 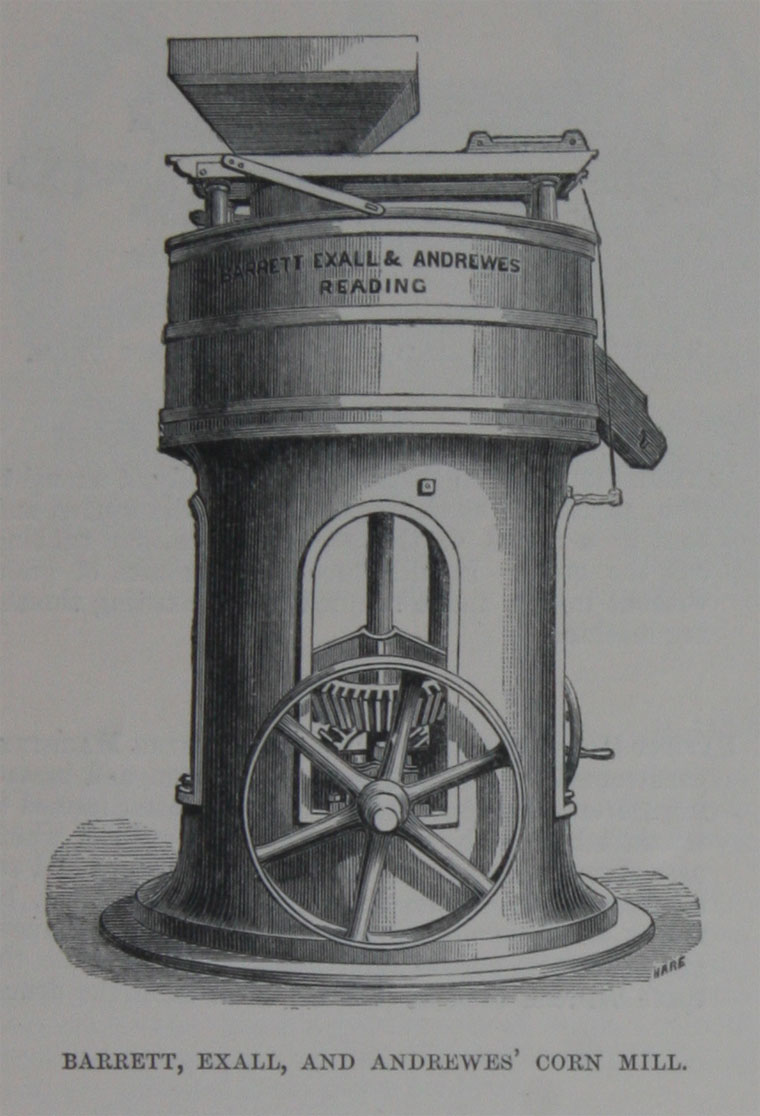 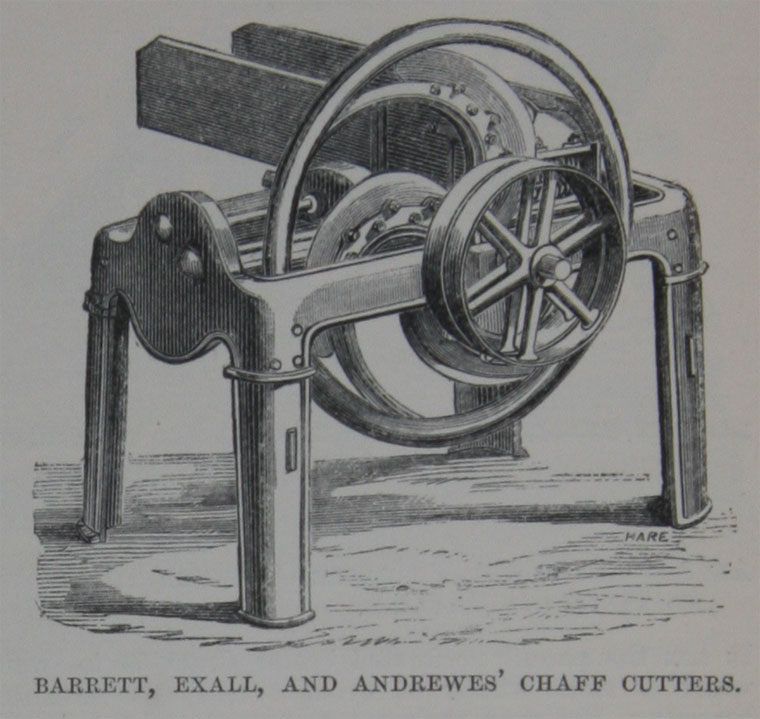 It is fitted with governor, pump, throttle and expansion valves, variable to any extent; a Lowmoor wrought crank shaft, mounted on a solid metal bed plate, planed and finished. It can be used without the condensers if there is not a good supply of water, but with that the consumption of fuel will be from 2 to 3 lbs. of coal per indicated horse power per hour.

It will be found at work in the Western Annex.

A 10-HORSE POWER HORIZONTAL HIGH-PRESSURE FIXTURE ENGINE, fitted with governor, throttle valve, pump, and wrought-iron crank shaft; it is fixed upon a solid planed-metal bed-plate, which renders it self-contained.

The character of its construction enables it to be removed without disturbing the foundations, it works most economically, and has worked 3 hours with 140 lbs. of coal, which will be its average consumption. It will work expansively from one-third to full steam.

AN 8-HORSE POWER HIGH-PRESSURE PORTABLE STEAM ENGINE. The boiler has 20 square ft. of heating surface for each nominal horse-power. The fire box is of Lowmoor iron, and has an ample water space very accessible for cleansing. It is cased with wood and sheet-iron, and is supplied with governors, water gauge, steam-pressure gauge, steam whistle, gauge taps, pump, and partial water heater, the crank shaft is bent and of wrought-iron, and the engine has every modern improvement.

AN 8-HORSE POWER PORTABLE COMBINED THRASHING AND FINISHING MACHINE. It has the patent perforated beater drum 54 in. wide which is made wholly of wrought-iron, as is also the breasting. The straw shakers are of wood, and the screens reciprocate with them, which prevents vibration. The bearings are the patent spherical ones, which give absolute truth in setting the machine, never heat, and run easy. It has the new patent corn elevator, which elevates any description of grain without the ordinary cups, dresses the corn whilst passing to the separating screen, by which means a second blower and the usual barley aveller are rendered unnecessary, and the machine is greatly simplified, and bearings, pulleys, and straps are dispensed with, and the wear and tear greatly economised. It finishes the corn for market.

AN 8-HORSE POWER PORTABLE COMBINED SINGLE-BLAST THRASHING MACHINE, with patent perforated drum 48 in. wide. It is fitted with the patent spherical bearings, and the new patent corn elevator.

PATENT PERFORATED BEATER DRUM wholly of wrought-iron, perforated at an angle of 45 degree to the square, and bent in a mould to the requisite form for rubbing out the grain. It will thrash all varieties of grain without injury, and is adapted to any existing thrashing machine.

PATENT HORSE-POWER PORTABLE THRASHING MACHINE, constructed for 3 light horses. The drum and breasting are entirely of wrought-iron; the latter formed of separate bars with serrated faces, the ends of which pass through slots in the sides of the machine and are set nearer to, or carried further from, the drum, by means of 2 revolving plates, having a continuous grooved worm cut on their faces, which increase the space between each as it is set to or from the drum, and thus allow the larger corn room to escape. The gear work is wholly inclosed in an iron cylinder, and by the arrangement of the wheels the strain is equalized and the friction reduced, whilst all accidents are effectually prevented.

The gear work gives a speed of about 100 revolutions per minute, and the machine will thrash all kinds of grain perfectly. It is most valuable for export, and is in general use in all the corn-growing countries of Europe.

PATENT HAND THRASHING MACHINE, fitted with the patent wrought-iron drum and breasting, and contained in iron frame. It will thrash all kinds of grain and seed without injury.

CORN-GRINDING MILL fitted with 48-in. French burr stones, the upper one revolving. An adjusting power is given so that it may be raised or lowered at pleasure. The whole mill is self-contained in a cylindrical iron frame, and is of the first class in all respects.

CIRCULAR SAW BENCH. The frame is wholly of iron, the bed plate is planed, fitted with metal fence, metal roller for the timber, boring apparatus, and fast and loose pulleys.

PATENT BAND SAW. The band or ribbon saw is passed over pulleys, and the table is of planed metal. It can be set for cutting wood at any angle or bevel.

A 6-HORSE POWER PATENT GEAR. The whole of the machinery self-contained in an iron cylinder, and adapted for communicating power for thrashing, sawing, pumping, etc.

PATENT GEAR WORK, adapted for working a chaff cutter by 1-horse power with or without an intermediate motion; by using the latter the speed is doubled.

CHAFF CUTTERS. The engraving represents a new and much improved series. The frames are of iron. The arrangement is simple, but very strong and effective, the working parts are protected; and they are adapted for manual, horse, and steam power.

GRAIN MILLS for crushing and splitting corn for horses and cattle. They will crush oats, barley, and linseed, and split beans and peas, with a minimum expenditure of power, and are adapted for hand, horse, or steam power.

SCREW LIFTING JACKS, or cotton screws. They are simple and strong; the screws are of the best forged iron, turned and chased in the lathe, and a corresponding nut is cut in the head of the frame which carries the weight.

BARLEY AVELLER, made entirely of iron. The barley is passed through a cylinder, in the centre of which is a spindle armed with knives, which remove the beard or awn from the grain. It is adapted for hand-power.

OIL-CAKE MILL. It has two sets of teeth revolving towards each other, so shaped as to take a firm grip of the cake, and break it small or large, as may be desired.

FLOUR-DRESSING MACHINE. The cylinder is fitted with wires of different meshes, with brushes revolving inside of it; thus four or more divisions of the meal may be produced at pleasure.

SLUICE VALVES, for either steam, water, or gas. The raising screws are square threaded and engine-turned, working in gun-metal nuts. The surfaces are brass faced, both in the sliding gates and seats.

HAY-MAKING MACHINE. It has two motions, a forward one for spreading the grass, and a backward one for lifting or turning it when nearly made. It has a simple arrangement with instantaneous action for giving it the desired motion, as also for elevating or depressing the rake barrels.

PATENT LEVER HORSE RAKE, very strong, simple, cheap, and novel. The outside frame used in all other rakes is dispensed with, the teeth are supported upon the axle, whilst a movable cleaner works inside the teeth and descends as they rise. It has a simple adjustment for altering the depth of the teeth while the rake is at work.

GORSE MACHINE, which first cuts up the gorse like fine chaff, and then crushes it between rollers running at different speeds. The prickles are completely destroyed, and the gorse reduced to a pulp fit for cattle food.