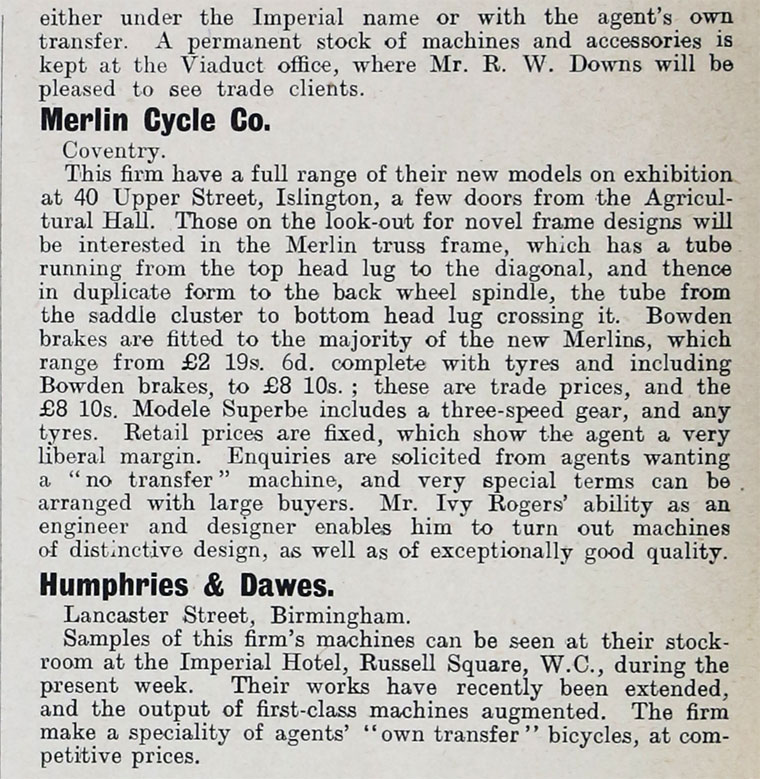 Note: This is a sub-section of 1908 Stanley Show

Raglan Cycle and Anti-Friction Ball Co., Ltd.
Coventry.
This well-known old Coventry firm is making a special display of its 1909 patterns at the London depot, Colonial Buildings, 59 to 61 Hatton Garden, E.C. The machines are exhibited in a very attractive way, and Mr. Peters, the London manager, will be pleased to see agents and discuss business for next year. The Raglan models are up-to-date in every particular, and as the prices are also quite in line with modern developments, agents should make a point of seeing the machines.

Rudge-Whitworth, Ltd.
Coventry.
This firm have a special show of their new models at all their London depots. While there is no radical change for 1909, the new pattern R.-W. machines embody many minor improvements, the best perhaps being the new back wheel rim brake, which is operated by a double bell crank on the lower head lug, so that the rods get an absolutely straight pull. There is also a detachable mud flap for the front guard. This is cut out of solid leather with ears which are inserted between the guard and its stay and the clips which hold the guard to the stay also hold tie flap in position. The use of the celluloid covering, which was popularised by Messrs. Rudge-Whitworth, is being extended, and the cranks and hub barrels are now being covered. Instead of fitting separate handle grips, the celluloid covering on some of the models is brought to the extreme ends of the bar, the last three inches being formed with ridges to make a convenient grip for the hands; the celluloid being all in one piece, there is, of course, no possibility of the handles coining off. BudgeWhitworths can still be obtained at prices to suit all pockets, and the pushing policy of the firm makes Rudge-Whitworth machines particularly easy to sell. The R. W. wire wheel for motor cars is also on view, and agents who go about with their eyes open cannot have failed to notice the increased number of cars fitted with these wheels.

Swift Cycle Co., Ltd.
Cheylesmore Works, Coventry.
The Swift Co. were one of the first of the big concerns to drop out of the Stanley Show, and they have remained firm in their decision not to show. They have, however, a very fine exhibition at their London depot, where they have exceptional facilities for showing machines. The 1909 Swifts only differ in minor details from their predecessors; if anything, the finish is a little better. Prices run from £6 10s. for the Imperial, which is a good sound machine and -extremely well finished at the price, to the No. 1, at 14 guineas lady's or men's. The No. 1 includes gear- case, three-speed gear, and, in fact, is a luxurious machine in every sense of the word. Mr. F. B. Bale told us that while a very large trade had been done last year with the low- priced machine, the great bulk of the business had been in the types selling between £7 and £9 retail, and a large and increasing demand had been experienced for the best machine. This is quite understandable when one remembers that the name of "Swift" has always been synonymous with high quality and good finish. Tricycles are still made, but tandems have been dropped.

New Imperial Cycle Co., Ltd.
Lower Loveday Street, Birmingham.
The new patterns of this firm are on view at their London offices at 62 Holborn Viaduct; these offices have only recently been opened, but in future a full range of the Company's various models can be seen here. The new model for 1909 is the " Girplex." This is a new and novel type of duplex cross frame; a duplex tube runs from the seat pillar to the lower head lug, and is crossed by two small diameter tubes from the top head lug right through to the chain stay bridge; this makes an extremely rigid frame, not only vertically, but laterally. This machine, in green enamel finish, including oil-bath gear case, retails at £10, or in stripped Toad racer form, £7 5s. The Imperial Co. do all their business through the trade, and supply machines to be retailed either under the Imperial name or with the agent's own transfer. A permanent stock of machines and accessories is kept at the Viaduct office, where Mr. R. W. Downs will be pleased to see trade clients.

Merlin Cycle Co.
Coventry.
This firm have a full range of their new models on exhibition at 40 Upper Street, Islington, a few doors from the Agricultural Hall. Those on the look-out for novel frame designs will be interested in the Merlin truss frame, which has a tube running from the top head lug to the diagonal, and thence in duplicate form to the back wheel spindle, the tube from the saddle cluster to bottom head lug crossing it. Bowden brakes are fitted to the majority of the new Merlins, which range from £2 19s. 6d. complete with tyres and including Bowden brakes, to £8 10s.; these are trade prices, and the £8 10s. Modele Superbe includes a three-speed gear, and any tyres. Retail prices are fixed, which show the agent a very liberal margin. Enquiries are solicited from agents wanting a "no transfer" machine, and very special terms can be arranged with large buyers. Mr. Ivy Rogers' ability as an engineer and designer enables him to turn out machines of distinctive design, as well as of exceptionally good quality.

Humphries and Dawes.
Lancaster Street, Birmingham.
Samples of this firm's machines can be seen at their stockroom at the Imperial Hotel, Russell Square, W.C., during the present week. Their works have recently been extended, and the output of first-class machines augmented. The firm make a speciality of agents' "own transfer " bicycles, at competitive prices.