A. M. Perkins and Son 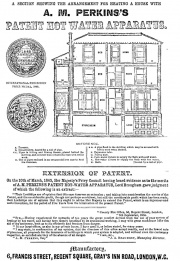 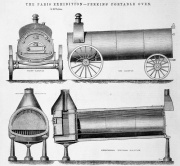 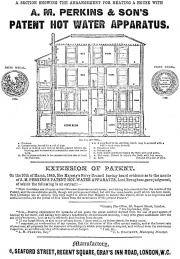 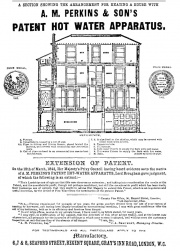 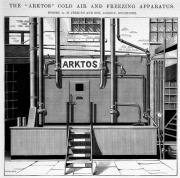 Perkins was the first manufacturer in the world to make the uniflow engine, simple compound and - at least proposed - also triple-expansion. He invented, patented and made and licensed out the manufacture of the uniflow engines from 1825, as described at length in the British, German, French, Swiss and American weekly and annual engineering and chemical trades journals of that period.

It was at the Seaford-street works, that he demonstrated by brake tests on a uniflow engine, operated simple first and compound afterwards, the entire fallacy of that theory, attributed to Dr. Robinson. In Seaford-Street, before engineering celebrities, in 1828, Jacob Perkins proved by brake tests that the exhaust steam from one uniflow cylinder when used in another eight times larger, gave about 70 per cent more power on the brake; but the theorists of the "old school" refused the evidence of their own eyes, and still maintained that it would require continuous increments of heat bled direct from the boiler to obtain that power increase in the large cylinder. [1]

Jacob Perkins and his son Angier founded another business at 48, Regent-square which prospered based on their exclusive systems of heating; George Heath acquired an interest in the business.[2]

1828/30 Angier March Perkins, son of Jacob Perkins, launched his own business which took some of his father's ideas for heating and turned them into a commercial system.

1829 Dissolution of the Partnership between Angier March Perkins, James Philip Roy, and Arthur Thomas Malkin, at Francis-Street, Gray's-Inn-Road, Civil-Engineers, under the firm of A. M. Perkins and Company, as far as relates to James Philip Roy[3]

c.1832 Developed a central heating system using high pressure water in small bore pipes that was installed in many large houses, hotels and other buildings. He also invented a method of joining the pipes using a fitting with left and right hand threads on opposite ends, still in use today.

1841 Failure of the boilers in some installations caused the insurance companies to withdraw cover for a time.

1851 A commercial bakery opened next door to the Francis St works. The owner asked Angier to develop an improved oven for him. The Patent Hot Water Biscuit Baking Co was set up at 7 Francis St, managed by Thomas Cluse.

1851 Patent on use of the hot water system in ovens.

Most of the bread ovens were sold to the Army

1854 Angier's son Loftus joined the business and worked there for 8 years. Loftus then went to Hamburg and Berlin where he designed and built heating systems.

1857 Patent on application of the high pressure hot water system for making wood pulp. A prototype plant ran in the Forest of Dean until 1873 when it exploded.

1865 Loftus took out a patent on the stopped-end steam tube which for the first time allowed control of the temperature of bread ovens.

1866 Loftus returned to England and went into partnership with his father as A. M. Perkins and Son. The improved oven was sold to large commercial bakers such as Huntley and Palmers and the London Cake Co.

1871 Designed a steam locomotive for use on the roads which was shown at the 1873 London International Exhibition.

1874 Developed an oven on wheels for use by the Army.

1878 A 79 ft steam yacht Emily was built for Loftus by Forrest and Son of Limehouse using triple-pressure steam engines on the Perkins system built by Greenwood and Batley of Leeds with a Perkins water tube boiler.

1880 A 7-ton launch Anthracite fitted with Perkins boiler crossed the Atlantic, the smallest steam-powered vessel to have done this.

1893 Werner, Pfleiderer and Perkins was incorporated as a limited company as an amalgamation of Werner and Pfleiderer and A. M. Perkins and Son Ltd. Due to disputes over the Arktos patents, the Perkins family cut their links with the new company.

1900 A. M. Perkins and Son continued to act as heating engineers.

1926 Within the last few days notices have appeared "To Let" on the most famous steam engineering works in London, and on which is still visible the sign - A.M. Perkins and Son Ltd - Engineers over its goods entrance in No. 7 Seaford-Street (formerly Francis-Street), Regent's-Square, Gray's Inn-Road, W.C.I.[5]