From Graces Guide
(Redirected from A. Rawlinson)
Jump to:navigation, search 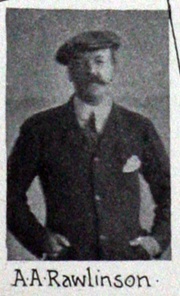 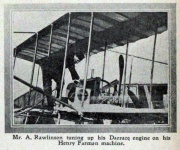 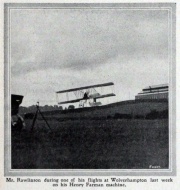 He was a polo player in the 1900 Summer Olympics. He was part of the Foxhunters Hurlingham polo team which won the gold medal.

He served in the 17th Lancers, but left to become a racing driver.

1904 RAWLINSON, A., 483, Oxford Street, London, W. Is managing director of the Darracq Co., and a prominent racing motorist. Will drive a Darracq car in the Gordon Bennett Eliminating Trials this year, and will be seen in many racing events during 1 904. Club: A.C.G.B. & I. [1]

In 1914 he volunteered, and became a chauffeur; he was then transferred to a staff position with IV Corps of the British Expeditionary Force. His driving exploits were described in his Adventures on the Western Front August, 1914 - June, 1915 (1925).

He became a Colonel, and British intelligence officer. Assignments include tours of duty in the Caucasus and Eastern Anatolia during 1918-1922. His mission was to guard the Tiflis-Baku railway, and to oversee the demobilizing Turkish forces. Under Lionel Dunsterville, he was sent on a mission to the Mountainous Republic of the Northern Caucasus.

On his last assignment, to establish whether Turkey was obeying the armistice conditions, he and his party were held prisoner in Erzurum by the Turkish authorities, placing the British Government in an awkward position because his elder brother was a highly-placed military man. He was eventually released in a prisoner exchange in 1921.

His book, Adventures in the Near East (1923, Andrew Melrose, London), chronicles the state of affairs during the armistice days at the end of World War I. In particular, he gives accounts of the landscape after the Russian withdrawal and the beginnings of the Turkish nationalist movement.

His second wife was the actress Jean Aylwin.

Retrieved from "https://gracesguide.co.uk/index.php?title=Alfred_Rawlinson&oldid=974539"
Categories:
This page was last edited on 4 September 2017, at 14:13.