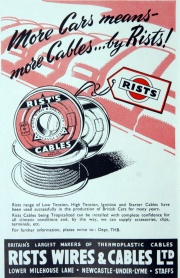 1927 A. Rist (1927) Ltd was formed to take over a business originally founded in 1916 by the late Mr. D. A. Rist and in which Lucas had taken an increasing financial interest. Its products included ignition coils, horns, lamps and other electrical and non-electrical equipment for motor vehicles.

By 1929, Lucas had acquired a controlling interest in the company, through nominees

1931 Lucas formed, through Rists, the Beacon Lamp Co for the manufacture of filament bulbs for motor vehicles. At that time Lucas was largely dependent for its requirements of such bulbs on members of the Electric Lamp Manufacturers Association (E.L.M.A.). When eventually E.L.M.A. learned of Lucas's ownership of the Beacon company, the latter was in production and Lucas was consequently in a better position to negotiate terms.

1934 A. Rist (1927) Ltd. acquired Flexible Electric Cords, a small company manufacturing electric cable for motor vehicles and other uses; this company then changed its name to Rist's Wires and Cables Ltd. Lucas has said that it financed this development in order to safeguard the supply of cable for use with its electrical equipment as it wanted to have a source of supply outside the cable manufacturers' "ring" that existed at that time.

1936 A. Rist (1927) Ltd was wound up and its business in ignition coils and other motor goods was taken over by Rists Wires & Cables. The principal product of the company became cable harness, used in conjunction with reference equipment.

1939 E.L.M.A. made a new 10 year agreement with Lucas under which Lucas obtained very favourable terms for its purchases of bulbs but agreed to dispose of the Beacon company to members of E.L.M.A. for the sum of £100,000 and to buy its requirements of bulbs exclusively from the members.

Lucas's connection with the Rist companies, which has always been through nominees, was not publicly disclosed.