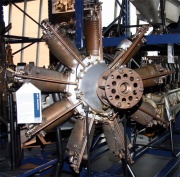 ABC engine in the reconstructed garage at Beamish Museum 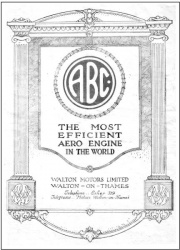 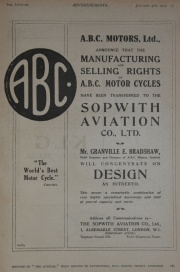 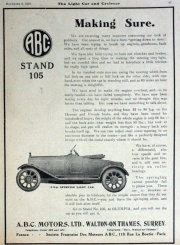 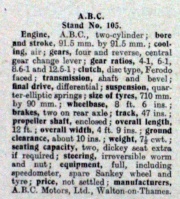 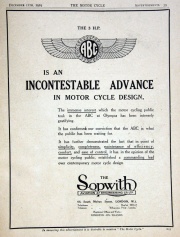 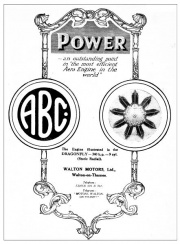 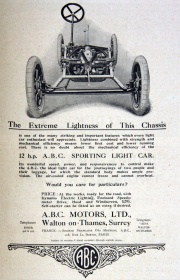 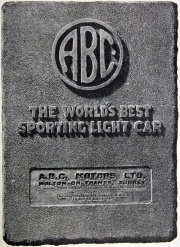 By agreement with Granville Bradshaw, Walton Motors acquired the aeronautical rights to the A.B.C. Aero Engines, including Dragonfly, Wasp and Gnat[1]. ABC Motors owned the majority of shares in Walton Motors.

1919 Public company ABC Motors (1920) Ltd floated to acquire as a going concern ABC Motors, manufacturers of A.B.C. Aero engines, motor cars, motor cycles, motor scooters, carburettors, etc, particularly to increase production of the ABC 2-seater sports car, for which Harper Bean had contracted to supply the principal materials (castings and forgings) and to sell the production with guaranteed profit[2]. Agreements with Sopwith in relation to ABC motorcycles and Gilbert Campling in relation to ABC scooters for receipt of royalties.

1920 The Sopwith company went into liqudation.

1920 In the November of that year they exhibited a lightweight car with two seats and a 'dickey' at the Motor Car Show at Olympia and the White City[4].

1921 Originally the selling price (of the motorcycle?) was set at £70, soon a price of £160 became realistic and later it became clear that any price under £300 was bringing a loss to the manufacturer, so the price became too high. After producing somewhere in the region of 3,000 machines, Sopwith went into liquidation.

1923 Output of all ABC motorcycles in the UK came to an end although the French company Gnome and Rhone continued to build these motorcycles under licence until 1925. (A 1923 ABC car is on display at Holkham Hall Bygones Museum. It was extensively rebuilt by 'Pom' Blake of Fakenham, including conversion from air cooling to water cooling).

1923 ABC Motors (1920) Ltd was put into liquidation; the business and works at Walton were sold by tender[5]

1924 Advert on this page shows that the business was continued as ABC Motors.

1929 Built a single-seater plane designed by A. A. Fletcher known as the ABC Robin using the Scorpion engine; the plane flew in 1929 but was scrapped in 1932.

1964 As result of internal reorganisation, became part of the Engineering Group of Vickers.