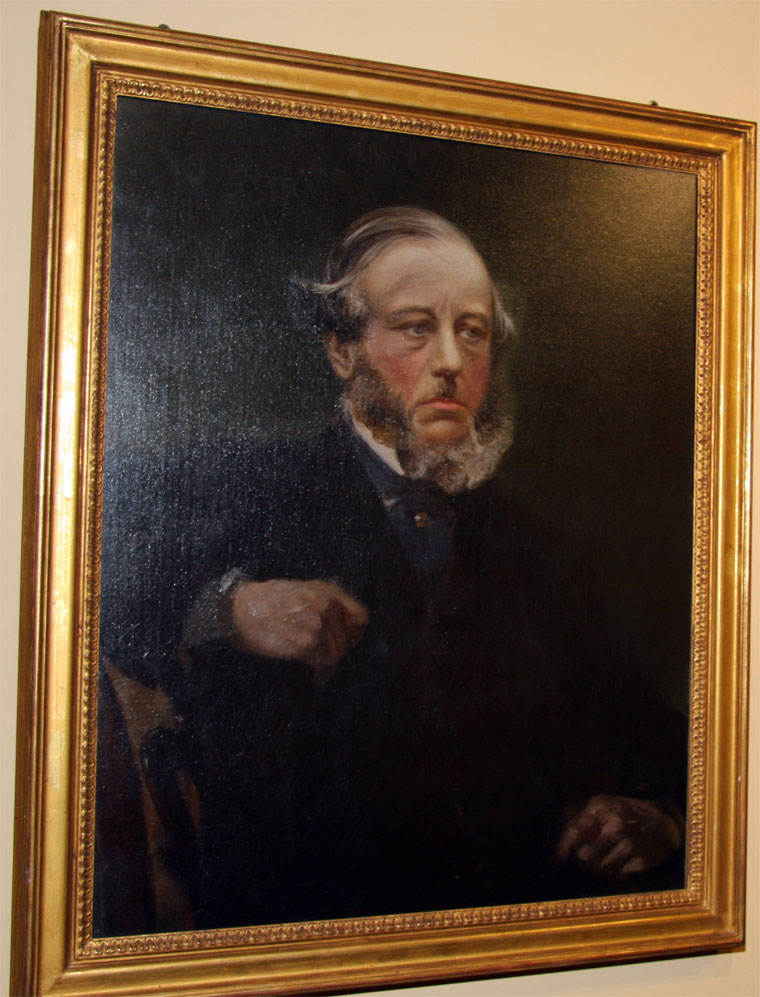 1839 Abraham Darby married Matilda Frances Darby, his cousin[1]. There was no issue[2].

1842 Francis Darby, Abraham Darby, ironmaster, and Alfred Darby, ironmaster, leased land from the Earl of Craven in Little Dawley, including coal and iron works, blacksmiths' and carpenters' shops, counting houses, coke and other yards and offices called the Lightmoor Works, as well as veins or mines of coal and ironstone under the estate, and opportunity to dig fire clay[3].

1849 The Darbys relinquished management responsibility for Coalbrookdale although kept a financial interest in the company.

1852 Abraham Darby wrote to Lord Seymour offering his thanks for allowing the gates made by the Coalbrookdale Co for the Great Exhibition of 1851 to be placed "in so desirable a situation" - they divided Hyde Park from Kensington Gardens[4].

1852 Abraham Darby was entitled to 88 shares (out of 720) in the ironworks and collieries of Coalbrookdale Co and sold them to Mary Darby[5].

ABRAHAM DARBY, who died at his residence, Treberfydd, near Brecon, on 28th November 1878, aged 74, was a member of the Darby family who have carried on the business of ironmasters at Coalbrookdale for about 170 years.

He was himself a thoroughly practical ironmaster, being intimately acquainted with the various processes of smelting, malleable iron making, and founding.

He and his late brother Alfred, by their energy and ability, raised the large ironworks of the Coalbrookdale Company to a pitch of great excellence and efficiency; and it is mainly owing to his knowledge and skill that those works attained their high reputation ill the manufacture of the finer description of castings.

In addition to his interest in the Coalbrookdale works, he embarked in 1844 in the ironworks at Ebbw Vale and neighbourhood, and from 1860 to 1873 he resided there as superintendent of the works, then greatly extended. At the latter date he retired from active business.

He became a Member of the Institution in 1865.

ABRAHAM DARBY.- Another of the oldest members of the Iron and Steel Institute has been removed from the roll by the death of Abraham Darby, the last of a distinguished race of ironmasters, and one who was in many respects entitled to the homage due to a father of the trade. The following account of the rise of this well-known family is quoted from Percy's "Metallurgy of Iron and Steel":— "About the year 1676, John Darby, a malt maker, residing at Bristol, sailed to Holland and engaged Dutch brassfounders to return with him to England. In 1706, in conjunction with four partners, he established at Bristol the brass-works known as Baptist Mills, of which he took the management. He conceived the idea that cast iron might be substituted for brass, and prevailed upon his Dutch workmen to try to make iron castings in moulds of sand; but they failed, and considerable loss was incurred in their experiments. At this time a Welsh shepherd boy named John Thomas succeeded in rescuing a flock of his master's sheep from a snowdrift; and later in the spring of the same year, during heavy rain and the melting of the snow, he swam a river to fetch home a herd of mountain cattle. These he collected, and drove to the river, but the ford had now become a boiling torrent. He nevertheless crossed it on the back of an ox, and brought home the whole herd in safety. As a reward for his courage, his master presented him with four of the sheep which he had saved. He sold their wool in order to buy better clothing for himself, and afterwards disposed of the sheep, so that he might obtain money wherewith to travel to Bristol, and ‘seek his fortune.' Afraid of being pressed for a soldier if found in Bristol out of place, as it was then the time of the Duke of Marlborough's wars, he requested his master to recommend him as an apprentice to a relative, who was one of the partners of the Baptist Mills. The boy was accordingly sent into the brass-works until he should procure employment. As he was looking on during the trials of the Dutch workmen to cast iron, he said to Abraham Darby that he ‘thought he saw how they had missed it.' He begged to be allowed to try, and he and Abraham Darby remained alone in the workshop the same night for the purpose. Before morning they had cast an iron pot. The boy Thomas entered into an agreement to serve Abraham Darby, and keep the secret. He was enticed by the offer of double wages to leave his master, but he continued nobly faithful, and afterwards showed his fidelity to his master's widow and children in their evil days.

From 1709 to 1828 the family of Thomas were confidential and much-valued agents to the descendants of Abraham Darby. For more than 100 years after the night in which Thomas and his master made their successful experiments of producing an iron casting in a mould of fine sand, with its two wooden frames, and its air-holes, the same process was practised and kept secret with plugged keyholes and barred doors. The sleeping partners at Baptist Mills became dissatisfied with Darby, believing that he had lost his judgment, and was wasting money in fruitless experiments. The partnership consequently dissolved, and Darby drew out his share of the capital. He took a lease of the furnace at Colebrook Dale, and removed with his family to Madeley Court, in 1709, John Thomas accompanying him.

While Abraham Darby lived affairs prospered; but, unhappily, after his death, a brother-in-law, in whom he had confided, acted dishonestly towards the widow and family, and even defrauded some of the workmen. Young Abraham Darby entered upon the management of the Colebrook Dale Ironworks about 1730. As the supply of charcoal was fast failing, Abraham Darby attempted to smelt with a mixture of raw coal and charcoal, but did not succeed. Between 1730 and 1735 he determined to treat pit-coal as his charcoal-burners treated wood. He built a fire-proof hearth in the open air, piled upon it a circular mound of coal, and covered it with clay and cinders, leaving access to just sufficient air to maintain slow combustion. Having thus made a good stock of coke, he proceeded to experiment upon it as a substitute for charcoal. He himself watched the filling of his furnace during six days and nights, having no regular sleep, and taking his meals at the furnace top. On the sixth evening, after many disappointments, the experiments succeeded, and the iron ran out well.

He then fell asleep in the bridge-house at the top of his old-fashioned furnace, so soundly that his men could not wake him, and carried him, sleeping, to his house, a quarter of a mile distant. From this time his success was rapid. To increase the power of his water wheels, of 24 ft. diameter, he set up a fire-engine (i.e., an old atmospheric engine) to raise water from under the lowest and send it to the upper pond which supplied water to the works, and put in motion the largest bellows that had been made. He obtained additional leases of valuable minerals, and erected seven furnaces, with five fire-engines. In 1754 the first furnace, at Horsehay, was blown in.

In December 1756, Horsehay's Work' was declared to be at a top pinnacle of prosperity, 20 and 22 tons per week, and sold off as fast as made, at profit enough. Iron rails were laid down for the tram waggons between Horsehay and Colebrook Dale about this time. The descendant of this notable pioneer of the iron trade, whose death it is now our duty to record, was the fourth Abraham Darby, and was one of two brothers, who were left in charge, when quite young, of the Colebrook Dale and Horsehay Iron Works. Penetrated with a lofty sense of duty, as the descendants of a worthy ancestor, and comprehending truly their position, they set themselves to restore to the works, by various improvements, and by surrounding themselves with an intelligent class of workmen, that prestige they previously enjoyed. The brothers worked harmoniously together, each taking a distinct department, and no two men were ever more esteemed by their workpeople and their neighbours.

Alfred died in his prime, at Stanley Hall, near Bridgenorth, and was buried in the grave-yard attached to the Friends' Meeting House, amid the mourning of the whole neighbourhood. Upon the company purchasing the Ebbw Vale Works, which for the sum paid - £350,000 - was a great bargain, Mr. Abraham Darby, who, with Mr. Joseph Robinson, had been the chief negotiators in the affair, with Mr. Brown, the then manager, at the wish of the proprietors, removed from the Dale to direct operations. He afterwards retired to Stoke Court, Slough, which he purchased, but after the crash which came with Barnard's and other banks, in which they were involved, and the defective management subsequent to the concern becoming a limited liability affair, he resumed the management, and resided in South Wales. An accident from the slamming-to of a large folding door, which struck him in the face, had a serious effect upon him; but it was chiefly from an affection of the heart that he ultimately succumbed, at the age of 75."