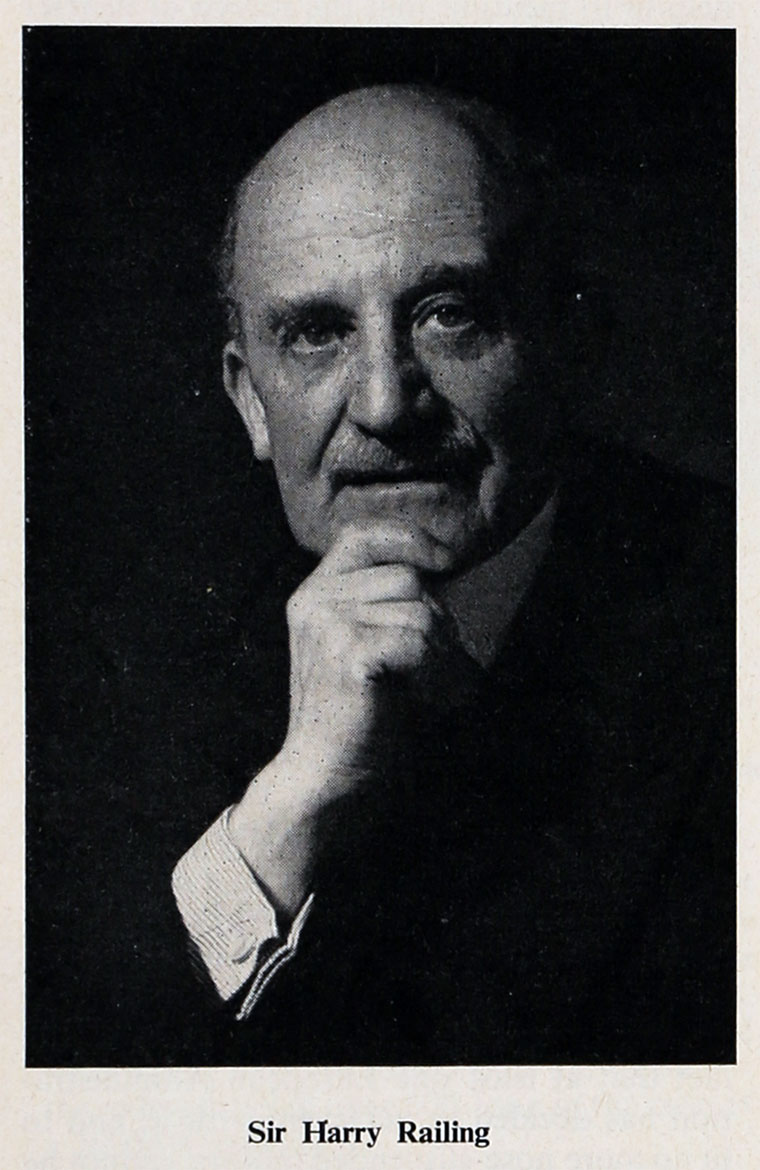 Adolph Harry Railing (1878-1963), later Sir Harry Railing, chairman of GEC. His first name was originally Adolf, which he later changed to Harry when he settled in England.

1878 December 10th. Born in Munich the son of Isaac Railing, a Jewish hop merchant, and his wife, Hannah, née Bing.

Went to work in the USA

1905 Joined GEC as chief of test at Witton

1942 Appointed vice-chairman of GEC and later that year chairman

1944 President of the Institution of Electrical Engineers

"WITH the death of Sir Harry Railing in London, on October 16, at the age of 84, the electrical industry has lost one of its great leaders. Sir Harry was a dynamic personality outstanding both as a practical engineer and administrator. When he retired in 1957 he had spent more than half-a-century in the service of The General Electric Company Ltd. the last fourteen years as chairman and joint managing director. He was also a past president and honorary member of the Institution of Electrical Engineers.

Harry Railing, a son of Isaac Railing was born on December 10, 1879 in Munich where he studied engineering and took his doctorate. He obtained practical industrial experience both in Germany and in the United States of America, before he joined Lord Hirst {then Sir Hugo Hirst) who was building up The General Electric Company Ltd. Harry Railing was twenty-seven when he started with the G.E.C. as head of the test department and laboratories of the company's engineering works at Witton, near Birmingham. Two years later he went to London as the company's chief technical assistant but the link with Witton remained, for in 1911 he was appointed a director and was put in charge of the Witton engineering works. It was a period of steady expansion, greatly accelerated during the First World War and afterwards. Then, under Sir Harry's direction the Witton group of works experienced a tenfold increase in size, producing heavy electrical plant and machinery including generators, motors, transformers, switchgear, and rectifiers. Although he transferred to the company's head office in London in 1933 he retained control of the Witton group. In London as his interest and responsibilities widened he was appointed joint general manager of the company in 1941. In that capacity he was increasingly concerned with the whole range of the firm's products lamps, domestic appliances, communications equipment and electronics as well as heavy engineering plant. In 1942 he became vice-chairman and a year later he succeeded Lord Hirst as chairman. It was mainly his drive that introduced the industrial applications of atomic energy to the G.E.C. and inspired further diversification of products, with increasing emphasis on domestic appliances and the light-current side of electrical engineering. Marketing problems and research into them assumed growing importance and Sir Harry spent a great deal of his time in travelling to get first hand information about consumers and their preferences.

Sir Harry was active in many spheres outside the immediate concern of his company. He became a member of the Tank Committee in 1916. In the Second World War he served on the advisory council for the department of Overseas Trade and on the Heavy Electrical Plant Committee; he did not relinquish the latter duty until 1956. For some years he was a member of the engineering advisory council of the Ministry of Supply. In 1944, after a long association with the Engineering and Allied Employers' National Federation, he became its vice-president in 1944. He was a Past Master of the Worshipful Company of Patternmakers. He was knighted in 1944.