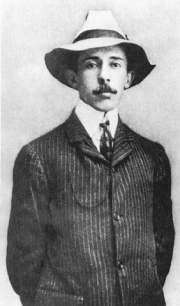 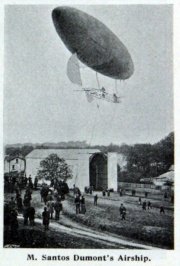 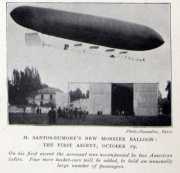 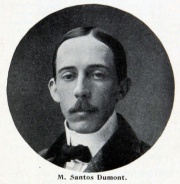 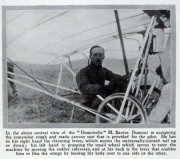 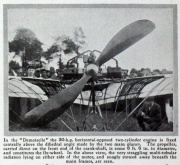 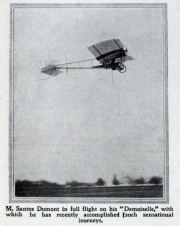 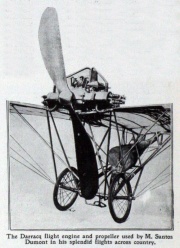 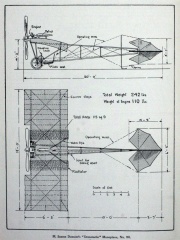 Alberto Santos Dumont (July 20, 1873 – July 23, 1932) was an early pioneer of aviation. He was born and died in Brazil. Heir of a prosperous coffee producer family, Santos Dumont dedicated himself to science studies in Paris.

Santos Dumont designed, built, and flew the first practical dirigible balloons. In doing so he became the first person to demonstrate that routine, controlled flight was possible. This "conquest of the air", in particular winning the Deutsch de la Meurthe prize on October 19, 1901 on a flight that rounded the Eiffel Tower, made him one of the most famous people in the world during the early 20th century.

1904 "SANTOS DUMONT, M. Is a Brazilian by birth, and expert aeronaut. Was the first balloon owner to steer an air-ship in a circle with and against the wind, accomplishing this feat in Paris in 1891, by circling the Eiffel Tower with an air-ship of his own make and design. Is a very rich man, and has adopted aeronauting the same as he has motoring, for pleasure." [1]

In addition to his pioneering work in airships, Santos Dumont made the first European public flight of an aeroplane on October 23, 1906. Designated 14-bis or Oiseau de proie (French for "bird of prey"), the flying machine was the first fixed-wing aircraft officially witnessed in Europe to take off, fly, and land. Santos Dumont is considered the "Father of Aviation" in Brazil, his country of birth.

1908 Designed an ultralight monoplane, no.19 Demoiselle (Young Lady), for the Clement-Bayard factory.

1932 Alberto Santos Dumont – seriously ill, and said to be depressed over his multiple sclerosis and the use of aircraft in warfare – is believed to have committed suicide by hanging himself in the city of Guarujá in São Paulo, on July 23, 1932. He was buried in the Cemitério São João Batista in Rio de Janeiro. There are many monuments to his work, and his house in Petrópolis, Brazil is now a museum. He never married or had any known children.