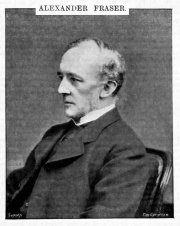 ALEXANDER FRASER, born in London on the 15th of June, 1823, was articled - after being privately educated - to the late Henry Austin, then Resident Engineer on the Blackwall Railway, but better known, perhaps, as the brother-in-law of Charles Dickens.

In the year 1845 he entered the service of the Southwark and Vauxhall Water Co as Assistant Engineer under the late Joseph Quick. By the Metropolis Water Act of 1852 all the Companies drawing their supplies from the Thames were required to move the point of intake above the tidal influence at Teddington. Mr. Fraser, therefore, was engaged in assisting Mr. Quick in the design and construction of new works at Hampton for the Southwark and Vauxhall and the Grand Junction Water Companies, to the latter of which Mr. Quick was Consulting Engineer. Large additions were also made to the pumping-stations at Kew Bridge and at Battersea.

On the completion, in 1860, of the new high-service works of the Grand Junction Co at Campden Hill, which he designed and carried out subject to the approval of Mr. Quick, Mr. Fraser was appointed Assistant Engineer to that Company, of which he became Engineer on the retirement of Mr. Quick in 1876.

During his long connection with the Grand Junction Company, many extensive works were completed at its various pumping stations. Among these may be mentioned large storage-reservoirs, filter-beds and pumping machinery at Hampton ; covered reservoirs for filtered water at Campden Hill and at Kilburn; a standpipe tower, reservoirs and filter-beds at Kew Bridge; and storage reservoirs for filtered water at Mount Park Hill, Ealing. Several miles of large trunk mains and the whole of the mains in the extensive country district of the Company were laid under his superintendence.

Mr. Fraser was also associated with Walter Hunter, a director of the Grand Junction Company, in the preparation of a scheme for the development of the water-supply from the Thames by the construction of large storage-reservoirs at Staines. This scheme was submitted to and approved by the Royal Commission of 1893 on the Water-Supply of the Metropolis.’

In 1893 Mr. Fraser suffered an attack of influenza, after which his health showed signs of failing. He struggled bravely, however, and remained at his post until within a few weeks of his death, which took place at his residence, The Mount, Ealing, on the 6th of October, 1895, the cause being attributed to dilatation of the heart.

Mr. Fraser was an able engineer and displayed admirable judgment in dealing with all questions relating to waterworks, his whole energies being devoted to the interests of the Company he served so long. As a man he was genial and pleasant, and was much respected and valued by those who knew him well, but owing to his very modest and retiring disposition his services were not so fully appreciated by the general public as they deserved to be.

Mr. Fraser was elected a Member on the 6th of December, 1870. In 1887 he contributed to the Institution some notes on the detection of leaks in water-mains.