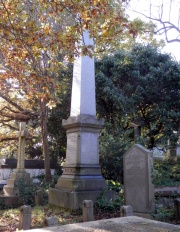 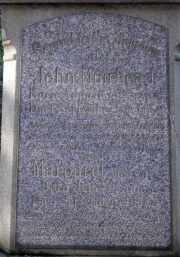 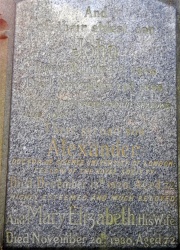 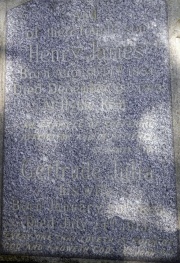 1848 Born on 26 May at Barley Mill, Saltoun, East Lothian, son of a farmer, John Muirhead, Senior.

By 1857 his father had joined the Electric Telegraph Co in London as a superintendent.

1869 Graduated at University College, London with honours in chemistry

Studied natural sciences at St Bartholomew's Hospital laboratory, obtaining his DSc (in electricity) in 1872. While there he attached wires to a feverish patient's wrist to obtain a record of the patient's heartbeat, probably the first ever electrocardiogram.

Scientific adviser to the firm of telegraph engineers founded by his father, with Josiah Latimer Clark and W. M. Warden - Warden, Clark and Muirhead

1875 Alexander was recognized worldwide as an expert in submarine cables, after he and H. A. Taylor patented a system that had been developed by Alexander, his father and his brother John.

Pioneered the electrical standard for capacity.

After Warden, Clark and Muirhead became Latimer Clark, Muirhead and Co, Alexander was made a director.

1882 Alexander set up an independent consultancy in Westminster.

From 1894 Muirhead became involved in the development of wireless.

1896 Muirhead and Co moved to Elmers End in Beckenham, Kent.

1901 The Lodge–Muirhead Wireless Syndicate was formed - it was bought out by Marconi in 1911.

Muirhead's many other interests included dynamos, arc lamps, insulating compounds, and the telephone.

1920 died at home in Church Road, Shortlands on 13 December

ALEXANDER MUIRHEAD, D.Sc, F.R.S., was elected an Associate of the Institution in 1871 and a Member in 1879. The following biographical sketch - slightly abbreviated - appeared in a Scottish paper with the advantage of corrections and the general approval of the Muirhead family.

Alexander Muirhead was the second son of John Muirhead, at one time farmer and tenant of the historical Barley Mill at East Saltoun, and of his wife, Margaret Lauder. Born in 1848, he was rendered partially but permanently deaf by a fall from his nurse's arms.

His early education was locally acquired, and, although of keen reasoning faculties, he does not appear to have taken kindly at first to the arithmetical and other studies in which he afterwards excelled.

His father, who had mechanical aptitudes, gave up farming at the age of forty and removed with his family to London, where he became known as a telegraph engineer, being a member of the well-known firm of Messrs. Latimer Clark, Muirhead, and Co. Young Alexander was sent to University School, London, and the boy, till now considered a dunce, steadily carried off more and more prizes, these culminating in the ' Cook Prize' for mathematics. Chemistry and Greek were also favourite branches of study. At his father's works, he came into contact with such visitors as Clerk Maxwell and Sir William Thomson, afterwards Lord Kelvin.

University College, London, came next in his educational experience, and to the strong influence of Professor De Morgan, and his horror of inexactitude, it may be attributed that throughout his life he refrained from publishing his work - to the occasional annoyance, it may be said, of his friends. After being a private pupil in Dr. Matthiessen's laboratory at St. Bartholemew's Hospital, he took his degree of D.Sc. in the London University, became, in 1870, Fellow of the Chemical Society, in 1874 an original member of the Physical Society of London, and soon after Membre de la Societe Francaise de Physique.

In 1875, he succeeded in the task of duplicating cables. For a few years he became a consulting expert, with rooms in 'Elm Court,' but returned to research work; and many friends, including Kelvin, Rayleigh, Hopkinson, Lodge, and Silvanus Thompson, often met and discussed problems in his laboratory.

At the urgent request of the cable companies, he took up the manufacture of instruments for cables, and many inventions of his came in succession to improve their working. In 1896, so important was the evidence he gave before the committee appointed to consider the practicability of laying a cable across the Pacific, that he was informed that he had saved the scheme from being dropped.

In 1894, on hearing Oliver Lodge lecture on Hertzian waves, at the Royal Institution, he went to him with suggestions, and the two collaborated, until Dr. Muirhead's practical mind was satisfied they had a reliable system of signalling across space without directing wires. The lecture, it should be noted, was given before Signor Marconi began his remarkable work.

In 1904, he was made F.R.S. But the lameness which had hampered him since an attack of influenza in 1891 now began to affect his health, and he was prevented, to his deep regret, from serving on the Board of the National Physical Laboratory. Then came the strain of war, and, though with the coming of peace his still alert mind returned to problems and new ideas, his bodily strength gradually failed, and he passed gently to rest at his residence, The Lodge, Shortlands, Kent, on 13th December, 1920, and was laid in the family grave at West Norwood.

Dr. Muirhead was a man of warm affections, and of kindly and lovable disposition. He travelled widely, but retained to the end his strong attachment to the country and the district in which he was born. He married Miss Blomfield, of London, by whom he is survived, but has left no children.

To these general facts the present writer must be allowed to testify to the friendship in which Alexander Muirhead was held by the few who really knew him. He was a man who suffered under exceptional bodily disabilities, but his genius for accurate measurement and scrupulous care in recording observations were of great service in the early days of cable telegraphy and to practical electrical science generally. It may be said that his chief work lay in the direction of electrical capacity. His were the original standards of capacity, and his experiments became the basis for later official work on those standards at the National Physical Laboratory. Questions of permanence were dependent for some time on the past history of Muirhead's standards and modes of measurement. Moreover, it was by his invention of distributed capacity that he achieved his notable task of duplexing cables. Automatic and rapid sending and receiving devices are a severe test of the exactness of imitation in artificial lines, and it was primarily by realizing the requirements that must be satisfied by a good artificial line that he succeeded, after many trials, in devising good* and practical arrangements for deep-sea cable duplex telegraph}'; thus largely increasing the practical efficiency of every long-distance cable.

The work of men like Charles Hockin, Fleeming Jenkin, and Alexander Muirhead, and of many other telegraph engineers, guided of course largely by the theory of Lord Kelvin, was of the utmost service in rescuing electrical science from its vague and qualitative condition and putting it on a metrical basis. It may be difficult for the present generation of electrical engineers to realize that the very names, Ohm, Volt, Ampere, and Farad, were born during the memory of people still living, and that methods of measurement extremely familiar to them had all to be devised and brought into existence so recently. When cable telegraphy began, in the most infantile manner, in or about the year 1851, few could have imagined its present developments. While as for the heavier branch of the profession, the name "Dynamo" was introduced at a meeting of the British Association in the late seventies or early eighties of last century. Through all that interesting but strenuous period, to the general ignorance prevailing in which the early numbers of The Electrician bear witness, Alexander Muirhead and many another pioneer lived and worked. We owe a debt to such men, which it is well occasionally to recognize.