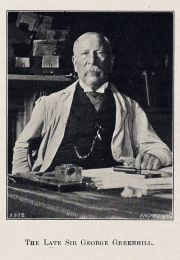 Sir (Alfred) George Greenhill, F.R.S. (1847-1927), was a British mathematician and professor at the Royal Artillery College at Woolwich.

George Greenhill was educated at Christ's Hospital School and from there he went up to St John's College, Cambridge in 1866.

In 1876, Greenhill was appointed professor of mathematics at the Royal Military Academy (RMA) at Woolwich, London, UK. He held this chair until his retirement in 1908.

1886 Wrote a series for The Engineer on Screw Propeller Efficiency;

His 1892 textbook on applications of elliptic functions is of acknowledged excellence.

In 1879, Greenhill developed a rule of thumb for calculating the optimal twist rate for lead-core bullets. This short cut uses the bullet's length, needing no allowances for weight or nose shape. Greenhill applied this theory to account for the steadiness of flight conferred upon an elongated projectile by rifling.

'A great mathematician has been removed from our midst by the death of Sir George Greenhill, which took place at his brother's house in Penge on Thursday of last week. His death was really the outcome of an accident which he sustained when alighting from an omnibus just before Christmas, and from which he never really recovered.....'

For the full obituary detailing his many eccentricities, see The Engineer 1927/02/18 p 189

It is with great regret that we have to record the death of Sir Alfred George Greenhill, F.R.S., who for many years was Professor of Mathematics at the Royal Artillery School, Woolwich. He was born on November 29, 1847, and was thus in his 81st year at the time of his death, which resulted from an accident on December 20 last, when Sir George was alighting from an omnibus.

The subject of our memoir was educated at Christ’s Hospital, where he gained the Thompson mathematical gold medal, and at Cambridge, where he was placed second in the list of Wranglers in 1870. In the previous year he had gained a Whitworth Scholarship, since the original scheme of the founder of this important benefaction provided for entries both from the shops and from the colleges. This plan had to be modified subsequently, because it led to scholarships being awarded to candidates who had no intention of following the profession of the engineer. In 1871 Greenhill was appointed Professor of Applied Mathematics at Cooper’s Hill, but found himself on uncomfortable terms with Sir George Chesney, the head of this institution, whose name was at one time very familiar as the author of the “ Battle of Dorking.” In consequence of this incompatibility of temperament, Greenhill returned to Cambridge, being awarded a Fellowship at Emmanuel in 1873, in which year also he acted as one of the examiners for the mathematical tripos.

Later on he was appointed Professor of Mathematics at Woolwich, an appointment he held till compulsorily retired on his attainment of the age limit. In this connection attention may perhaps be drawn to the treatment he then received. Greenhill, in spite of his eminence as a mathematician, and the lustre thereby added both to the Woolwich school and to his country, was retired without a pension.

At Woolwich he did much to develop the study of elliptic functions, probably impelled in this direction by questions of exterior ballistics. Early investigators of the flight of projectiles were prone to assume that the frictional resistance was a continuous function of the velocity, and that it could be represented as simply proportional to a power of the speed. Experiment showed that the resistance increased distinctly faster than did the square of the velocity, and that over a considerable range it could be fairly well represented as proportional to the third power of the speed. In this case the mathematical discussion of the trajectory involves the use of elliptic functions. Whilst Green-hill’s studies may well have originated as above suggested, the same class of functions are involved in the mathematical discussion of gyroscopic actions. Whether, however, Greenhill took up his exhaustive study of the mathematical theory of the gyroscope, because of his prior study of elliptic functions or because of the fact that the shell from a rifled gun is a gyroscope, we are unable to say. As the path of a projectile is curved, gyroscopic actions would lead to drift if the axis of the projectile remained tangent to the trajectory. Greenhill found, however, that the drift then arising would be in the wrong direction, and the drift is now generally associated with the so-called Magnus effect, which was, however, originally discovered and fully described by Robins in 1743. Some of the results reached in Greenhill’s study of the gyroscope were very beautifully illustrated by stereoscopic slides drawn by Mr. T. I. Dewar, of which a number were reproduced in our columns.* Greenhill’s work on elliptic functions has hitherto found little or no application in engineering problems, but it seems possible that this may be altered by the relatively recent discovery that mathematical hydrodynamics can no longer be defined as the science which has no relationship to the motion of real fluids. The circulation theory of aeroplane support has effected a revolution in this regard, and we can now map out with some confidence the stream lines round an aeroplane wing. If, however, two or more wings are involved, the mapping of the stream lines necessitates the introduction of elliptic functions.

The article on hydro-dynamics, which appeared in the ninth edition of the Encyclopedia Britannica, was contributed by Greenhill, and was revised by him for the eleventh edition.

If more immediate practical interest was the paper he contributed to the Institute of Naval Architects in 1888, in which he explained a new theory of the screw propeller. Rankine’s theory was based on the supposition that the fluid passed through the propeller without change of pressure, save such as might be caused by the rotation of the race. Greenhill, on the other hand, suggested that the thrust was due to a change of pressure combined only with such sternward momentum as was necessary to equalise the axial and radial pressures. Both theories were merely mathematical, not physical, and were correspondingly little illuminative, although, by the use of empirical coefficients, Rankine’s served for many years as the basis of propeller design. To-day owing to the development of the Lanchester-Prandtl circulation theory, some progress has been made in determining the mechan-ism by which the thrust is produced, and in view of the distinction between the Rankine and Green-hill theories, it is of interest to note that the lift of an aeroplane of infinite aspect ratio is half due to pressure, and half due to the downward momentum developed.

Sir George Greenhill also wrote on the whirling of shafts, contributing three articles to our columns on this subject in 1918, hut his methods have so far been little followed in practice, because in the cases of most immediate interest, the shaft is generally far from uniform in diameter, and recourse is, therefore generally had to the late Lord Rayleigh’s plan of equating the kinetic energy of a vibrating shaft, when the displacement is zero, to its potential energy when the displacement is a maximum.

Sir George Greenhill was a notable defender of the use of engineering units in theoretical investigations, and a strong opponent of Prof. Perry’s slug. Much, of course, depends upon the kind ot investigation that may be in hand, but there is very much to be said for the general use of the C.G.S. system in original studies of any intricacy, since the danger of inadvertently using the term lb. with two different significations, is thus automatically avoided, and the final results are easily translated into the more familiar units.

During the war, he contributed to our columns an article dealing with super range artillery, which originated in the long-range bombardment of Paris by the Germans. Other contributions included an article (Engineering, vol. cviii, page 720), dealing with the attraction of light towards the sun as evidenced by the famous eclipse expedition, organised in 1919, to test Einstein’s doctrine of Relativity, and in 1920, we published a series of articles by him on “ Collision Dynamics.” Mention may also be made of a note on Echelon Waves, which he read at the Spring Meeting of the Institute of Naval Architects, in 1916.

He read and contributed many important papers to the more purely scientific institutions, and he was commissioned to direct the preparation of the table of Elliptic Functions, published by the Smithsonian Institute. In 1885, he published a useful little treatise on “ The Integral and Differential Calculus.”

Though of a kindly, naturally courteous, disposition, Greenhill was very shy and reserved, and became difficult of approach as he grew old. Independent in character and judgment he evaded criticisms and direct questions; the ordinary “ how do you do,” was one of the formalities he disliked, and he objected to being photographed. When he attended the British Association Meeting at Toronto in 1924, he insisted upon joining in the strenuous excursion across the Canadian Continent and he caused some anxiety to the officials of the Association. In his last years he was almost a recluse in his rooms in Staple Inn."