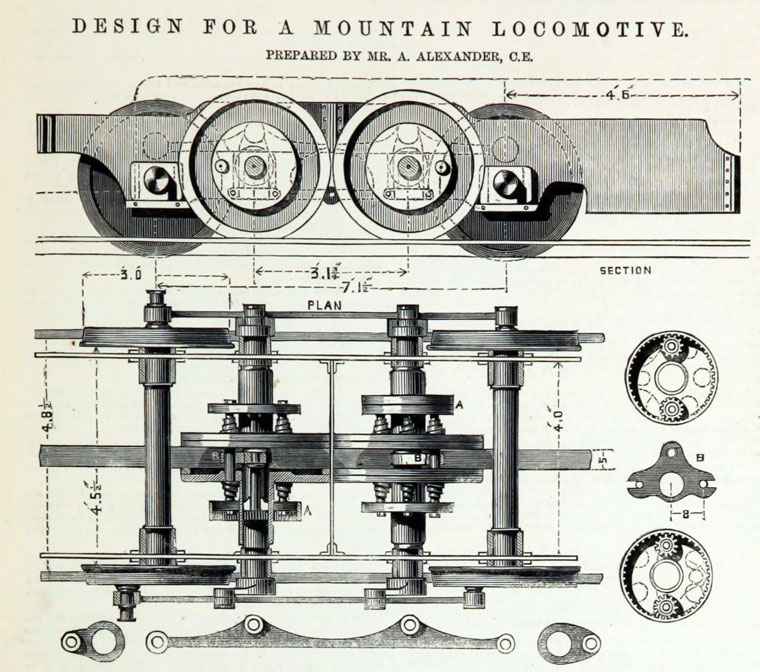 1828 31 May: Born at St. Andrews, son of Andrew Alexander, Professor of Greek at St Andrews University and his wife Esther nee Proctor[1]

1860 of Canada Works, discussed the topic of Tubular Bridges in a series of letters to The Engineer.

Designed the locomotive for steep inclines, otherwise attributed to Fell, which was tested at Whalley Bridge on the Cromford and High Peak Railway[3]

Andrew Alexander, was a civil engineer of some standing and a mechanical engineer. He was interested and active in aeronautics and he was a founder member of the Aeronautical Society in 1866. He presented some papers to the society including "Power in Relation to Weight in Aerial Navigation".

In 1875 he went to see Thomas Moy's Aerial steamer at The Crystal Palace. This woefully underpowered machine illustrated many interesting design features and on demonstration may have achieved a brief hop into the air (accounts vary). That same year, he became manager of the Cyclops works of Charles Cammell and Co in Sheffield — a city famous for metalworking — there he worked on the problem of improving the quality of armour applied to warships.[8]

Andrew Alexander was a practical-minded man, unlikely to be prone to flights of fancy, yet at a time when many ridiculed the idea of heavier-than-air flight, he told his son Patrick he was sure that the problems of aviation would be solved. He was clearly a major influence on Patrick's life.