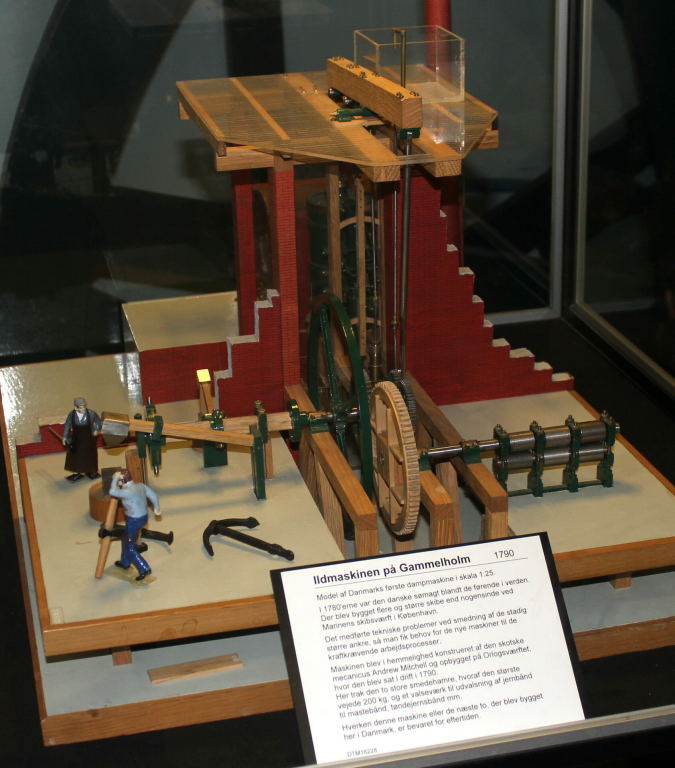 In the late 18th century Denmark needed to obtain British technology, particularly for forging large anchors for the navy. Lieutenant Commander Adam Haaber was sent on a secret mission to Britain, and managed with great difficulty to acquire both drawings and a model machine, together with two Scottish 'experts' (Andrew Mitchell and Alexander Young) who could undertake the construction of Denmark's first steam engine

The machine, built on Gammelholm, comprised a steam-driven forge hammer which could also serve to drive a rolling mill, bellows, grinding works or dock water pumps. The project was slow and expensive. It was completed in November 1790, and cost 83,000 rigsdaler instead of the estimated 13,000 -14,000 rigsdaler . Many of the problems were due to the lack of experience in making the required parts in Denmark.

The machine of the early Boulton & Watt type, based on James Watt's famous patent from 1769 with later improvements. When it was finally finished, it seems to have worked satisfactorily for some years. It proved very expensive to run, with high coal consumption and high maintenance costs, with the machine being frequently out of order. The machine taken out of service in 1801, and Mitchell, who had been engaged on a lifetime contract, was dismissed with four years' advance salary.