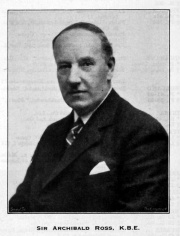 Educated at Marlborough School, he began his working life as an apprentice for R. and W. Hawthorn, Leslie and Co

1916-18 was a member of the Admiralty Shipbuilding Council.

1925 Became a Director of Ruston-Bucyrus

Sir ARCHIBALD JOHN CAMPBELL Ross, K.B.E., who was appointed a Vice-President of the Institution just a month before his death on 16th March 1931, became a Member in 1920 and a Member of Council in 1925.

He was born in 1867, and after leaving Marlborough College went to the works of Messrs. Hawthorn, Leslie and Company in Newcastle as a pupil apprentice, and he remained with the firm throughout his life, eventually becoming managing director. He successively occupied the positions of assistant outside manager and outside manager of the works, and travelled extensively for the firm.

He had much to do with the naval vessels which his firm built for the Russian government, and he was elected a director of the company in 1910.

During the War Sir Archibald served on Sir Joseph Maclay's Committee on standard ships and engines, and from 1916 to 1918 was a member of the Admiralty Shipbuilding Council.

In 1919 he was chosen as an employers' delegate to the International Labour Convention at Washington, and he occupied several high offices on employers' organizations.

In 1929 he was chosen as a member of the Cotton Wages Arbitration Board. He was also in recent years a director of Messrs. Ruston-Bucyrus.

We set down the cold and familiar formula—“ We deeply regret to have to announce that Sir Archibald John Campbell Ross, K.B.E., died at Heddon Hall, Newcastle-on-Tyne, on March 16th, after a long illness but how little does it represent what hundreds of friends are feeling about the loss of “ Archie ” Ross. Whether he was known only in business or more familiarly in his home or on the banks of a stream, he was universally beloved, and his nickname followed him wherever he went. Even when an honour came to him, he remained rather “ Sir Archie ” than Sir Archibald. A little thing like that shows what manner of man he was. Indeed, he comprised in himself the ardour of youth with its candour, and it is by such means that friends are made. To these qualities he added a pleasant humour and great industry. It has been said, anil with some truth, that ho spent three nights in every week in the train. Certain it is that he rarely missed any conference in London or elsewhere that affected the welfare of the engineering industry, and that alone must have entailed a great deal of travelling. But he could always find time to serve his friends anil yet spare enough for music anil for fishing—his favourite recreations.

Although he was not a railway man and had but little to do with the locomotive building interests of his company, he took a keen delight in showing visitors to his home the district surrounding it, made famous by the Stephensons, and it was almost entirely owing to him that a permanent memorial of George Stephenson was placed upon the walls of the little cottage in Wylam in which that pioneer of the locomotive was born. For many years he served on the Council of the Institution of Mechanical Engineers, and as a mark of the esteem in which he was held, the Council nominated him for a Vice-presidency, to which high office ho was elected only a few weeks ago.

Archibald John Campbell Ross was the son of the late Rev. A. J. Ross, D.D., Vicar of St. Philips, Stepney, and later of Snelstone Rectory, Derbyshire, and a brother of the distinguished Orientalist, Sir Edward Denison Ross. He was born in 1867, and was at the time of his death therefore only in his sixty-fourth year. He owed much to the wide outlook and influence of his father, who sent him to Marlborough School. After completing his education there in 1885, he went to Hawthorn, Leslie and Co., Ltd., of Newcastle-upon-Tyne, as a pupil apprentice. His work was such as early to mark him out for promotion, and he successfully occupied the positions of assistant outside manager and outside manager of the works, and travelled extensively for the firm. He had much to do with the naval vessels which his firm built for the Russian Government, and it was when travelling in Russia that he met his wife, Maria, the daughter of the late Colonel Gouseff, of St. Petersburg, whom he married in 1896. In 1910 he was elected a director of the company, and three years later was appointed the managing director of the St. Peter’s Marine Engine Works. He saw marine propulsion change from the. reciprocating steam engine to the geared steam turbine and the marine oil engine, and witnessed the coming of the reciprocating steam engine with improved valve gears and exhaust steam turbines. He interested himself keenly in all these new developments, and carried out successful work for naval and mercantile ships. During the war period Sir Archibald was associated with the Admiralty. He served on Sir Joseph Maclay’s Committee on standard ships and engines, and from 1916 to 1918 was a valued member of the Admiralty Shipbuilding Council. In 1918 he was created C.B.E. and his knighthood in the same Order followed in 1921.

Throughout his business career he took an active part in all matters relating to the employers’ organisations in the engineering industry, and occupied various high offices in the North-East Coast Engineering Employers’ Association and the Engineering and Allied Employers’ National Federation. In 1919 he was chosen ns an employers’ delegate to the International Labour Convention held at Washington. For a number of years he was chairman of the Conference Committee of the Engineering Employers’ Federation, a position which brought him into the closest contact with the various engineering trade unions. For the period 1926 to 1930 he was President of tho Federation, while between 1928 and 1929 he served as Chairman of the General Purposes Committee of the National Confederation of Employers’ Organisations, subsequently becoming Vice-president of that body. On more than one occasion the Government sought the services of Sir Archibald Ross on Government Committees, and, in addition to his war-time work, already referred to, he was chosen as a member of the Cotton Wages Arbitration Committee in 1929, which sat under the presidency of Mr. Justice Rigby Swift. Sir Archibald identified himself closely with the scientific institutions of his profession, and was a member of the Institution of Civil Engineers and a Fellow and Member of Council of the North-East Coast Institution of Engineers and Shipbuilders, occupying the presidential chair during the years 1922 to 1924. He represented the North-East Coast Institution on the Consultative Committee of Engineers and Shipbuilders appointed to confer with the Board of Trade. As a Member of Council of the Institution of Naval Architects his services were greatly valued, and the Institution nominated him as its member on the Technical Committee of Lloyd’s Register of Shipping. Reference has already been made to his interest in the work of the Institution of Mechanical Engineers and his recent election as its Vice-president. In 1925 he was a director of Ransomes and Rapier, Ltd., and at the time of his death a director of Ruston-Bucyrus, Ltd.

Although his duties frequently took him from home, he was keenly alive to local interests, and was a Member of Council of Armstrong College ; he was also closely identified with the musical life of Newcastle-upon-Tyne, being himself a talented musician, and for some years he held the office of Chairman of the Executive Committee of the North of England Musical Tournament. His principal outdoor recreation was fishing, and his interest in that branch of sport was recognised by his election last year as President of the Fly Fishers’ Club, of which for many years he had been a member.

By the death of “ Archie ” Ross we lose a great soul, a genial friend, and a marine engineer whose loss is made the more keen by the recent deaths of his friends and colleagues, Andrew Laing and Sir Charles Parsons, men whose leadership and guidance in North-East Coast industry will be sorely missed for many years to come."

Sir Archibald John Campbell Ross, whose death occurred at Heddon-on-the-Wall, Northumberland, on Monday, March 16, at the age of 64, had had a live-long connection with the engineering and shipbuilding industries of the north-east coast area and his activities and interests in those fields were widespread, though he had always been in the service of one firm, Messrs. R. and W. Hawthorn, Leslie and Company, Limited, of New-castle-on-Tyne.

Sir Archibald was born at Stepney, in 1867, where his father held a cure of souls, and received his early education at Marlborough. On leaving school he was apprenticed to the above-mentioned firm and at once showed himself a keen student of marine engineering. Having served the term of his indentures he became successively assistant outside manager, outside manager, director and managing director, holding the latter post at the time of his death. His appointment to the board dated from 1910. During his connection with this firm, which covered the whole of his working life, he was responsible for carrying through many important contracts for the manufacture of marine turbines and boilers and for their installation, especially on the ships of the Navy. In 1904 he was sent to Russia, where he carried out work in Petrograd and Nicholaeff on the Russian battleships, Petropavlovsk and Captain Sacken.

During the war Sir Archibald was instrumental in speeding up marine construction in his capacities as member both of the Merchant Shipbuilding Advisory Committee and of the Admiralty Shipbuilding Council. In 1919 he attended the International Labour Convention at Washington as an employers’ delegate, and in the same year served as a member of the Cotton Wages Arbitration Committee, which was presided over by Mr. Justice Rigby Swift. At various times during his career he occupied important positions in the North-East Coast Engineering Employers’ Association, and after being chairman for a number of years of the Conference Committee of the Engineering and Allied Employers’ National Federation, acted as president from 1926 until 1930. He was elected a member of the Institution of Civil Engineers in 1921, and was also a member of the Institutions of Mechanical Engineers and Naval Architects, and of the Institute of Metals. He was a past-president of the North-East Coast Institution of Engineers and Shipbuilders, and it was largely owing to his suggestion that this body decided, a short time ago, to place a commemorative tablet on the cottage at Wylam-on-Tyne, where George Stephenson was born. He was made a Commander of the Order of the British Empire in 1918, for his work during the war, and a K.B.E. in 1921."