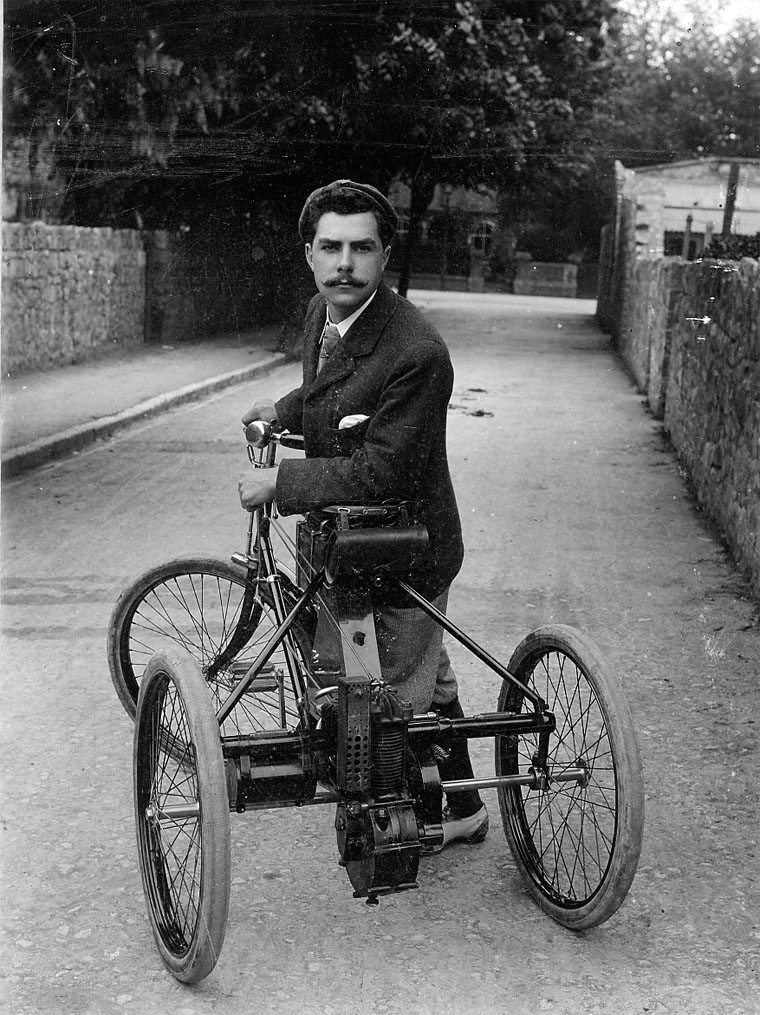 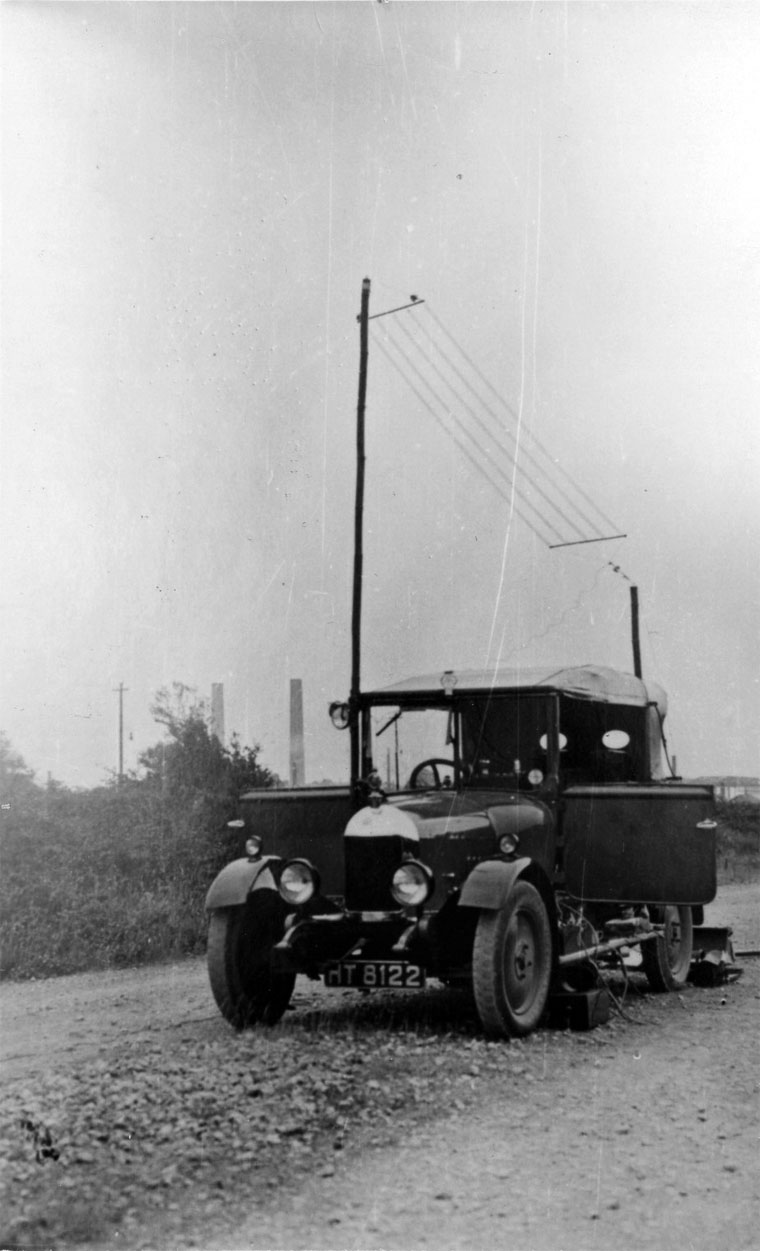 Arthur E. Johnson with his wife May, and his father George.

Mr Arthur Edward Johnson, managing director of the Bristol Motor Co., Ltd., and a pioneer of the motor industry, died in a Clifton nursing home, at the age of 73, yesterday. He had been in poor health for some weeks.

An owner and driver of motor cars since 1897, he was particularly proud that he was the first person to drive car from London Bristol in day. This he did 1898. Apprenticed to the cycle and motor trades, he became, 1898, manager the Bristol Motor Co., which organised one of the first motor vehicle public services in the country 1899.

He studied electricity and mechanics at the Merchant Venturers' Technical College and at Bristol University and then became manager of the Motor Department, Bristol Wagon and Carriage Works Co., Ltd., in 1909.

During the World War he was engineer and later supervisor of the North Somerset unit of farm tractors (Food Production Department), and became managing director of Bristol Motor Co., in 1921.

In 1923 completed the first permanent wireless installation motor-car with the speaker controlled from the driver's seat, and also patented the first collapsible and extensible wireless aerial, known as the "Helicoid" aerial 1924.

He had filled various executive positions, and his associations in the motor trade and industry included: — past chairman of the Chartered Institution of Automobile Engineers and Motor Agents Association (Western Centre), past member of the Council of the Nation Motor Trades Association, The Advisory Council to Nation Used Car Price Book, the Council of Society of Motor Manufacturers and Traders, the Council car distributors Section of Motor Agents Association. He was an original member of the Joint Committee Retailers Section and Car Manufacturers S.M.M.T., a director of examinations (Western Centre. 1.A.E.), a past examiner of members of the A.A., past vicepresident of the Bristol Radio and Television Society and founder member of Bristol and West of England Aero Club.

At the time of his death Mr Johnson was a member of the Circle of 19th Century Motorists, the Pioneer Motor Cyclists, the Fellowship Old-time Cyclists, the National Council and Fellow of the Institute of British Carriage and Automobile Manufacturers, the Council of the Retailers Section Society Motor Manufacturers and Traders, Bristol Road safety Council, Bristol Industrial Savings Committee, National Council of the Royal Automobile Club and life member of the Fellowship of the Motor Industry. He was also a past president of Bristol Rotary Club, of which he was founder member, and member of the Council of the Bristol Chamber of Commerce and Shipping.

Mr Johnson leaves a widow and daughter. The funeral service will be at Highbury Congregational Church at 12 noon, on Tuesday, followed by interment at Canford.

"ARTHUR EDWARD JOHNSON was the managing director of the Bristol Motor Company, Ltd., and was a prominent figure in the motor industry, with which he had been closely associated for over fifty years. He was the first to drive a car from Bristol to London in one day, a feat he accomplished in 1898.

He received his technical education at the Merchant Venturers' College and at the University of Bristol. His practical training was obtained at the Johnson Cycle Works, Scunthorpe, Lincolnshire, from 1891 to 1895. After acting as assistant manager at the Boulevard Cycle Works, Weston-super-Mare, for two years he was appointed manager of the Bristol Motor Co, and in 1902 the first "Bristol" car was produced by the firm. The sales and service side of the business was transferred, under Mr. Johnson's management, to the Bristol Wagon and Carriage Works Company, Ltd., in 1909. Twelve years later, however, he left the firm and founded the Bristol Motor Company, Ltd., of which he was managing director until his death, which occurred on 30th September 1948, in his seventy-fourth year.

He was elected an Associate Member of the Institution of Automobile Engineers in 1907 and was transferred to Membership in 1918. Mr. Johnson was the inventor of the first collapsible and extensible wireless aerial, and also completed the first permanent wireless installation in a car, controlled from the driver's seat."

A.E.J. as he was commonly known lived in Weston-super-Mare, and when only a young boy of nine or ten, he received his first bicycle. This defining moment provided him his livelihood and established what was to be a life-long interest in the thriving motor industry.

He later became managing director of the Bristol Motor Co - a post which he held from 1921 until his death in 1948.

When still a young boy he approached the proprietor of the Boulevard Cycle Dept. in Weston named W. M. Appleton and asked for a job. Appleton found him a job role first teaching clients to ride in the Cycling Academy and later more responsible duties on the sales side.

In 1897 Henry Sturmey, editor of The Autocar was demonstrating a Daimler car on tour of the West Country and called in at Weston-super-Mare. Both AEJ and Appleton were intrigued by this new form of transport so much so that a 4 1/2 h.p. Daimler and a 1 ¼ h.p. Beeston tricycle were ordered, both of which A.E.J. drove down from London when delivery was notified.

In 1898, Appleton made him manager of the Bristol Motor Co after AEJ proved himself so useful. The young manager was very popular - a Bristol newspaper even ran a story about one of his first clients in 1934 who bought a Benz in 1898 and was still buying cars from him thirty-six years later.

1899 Johnson was fined 10/- at Bristol Magistrates' Court for speeding. A constable, said in evidence, 'He was driving furiously, I estimated his speed at 15 m.p.h.' This was perhaps considered a cheap form of advertising, as the defendant was driving uphill at the time and the vehicle in question (a 4½ h.p. Daimler delivery van) only usually reached maximum speed of 8 m.p.h in second speed gear. He had offered this defence in court, but his plea was dismissed.

Johnson and Appleton decided to manufacture a car of their own and base the design on the contemporary two-cylinder Daimler. The intention at first was not to offer these cars for sale, but to keep them for company’s private use. In 1902 the first car was produced and a further six or so more in 1904.

1909 Johnson left the Bristol Motor Co to take the whole of the motor sales department to Bristol Wagon and Carriage Works Ltd as manager.

He met W. R. Morris who was to become a lifelong friend as well as a business acquaintance. He ordered the third Morris ever to be built. His order was the earliest in writing, as the other order records were lost.

1913 The delivery he took of that Morris in April 1913 was a franchise which made his fortune.

Throughout World War I A.E.J. developed and oversaw a farm tractor sales and service department which included demonstrations of new types of machinery, playing his part towards local food production.

In 1920/ 21, Leeds Forge Co bought up the shares of Bristol Wagon and Carriage Co., and A.E.J who had been negotiating with several friends, opened once more as Bristol Motor Co. Ltd. with the old premises in Victoria Street.

Arthur Edward Johnson died in 1948. In his time he held many important offices and was a member of many pioneer organisations, among them The League of Pioneer Cyclists. He was a pioneer motorist in the Bristol area.