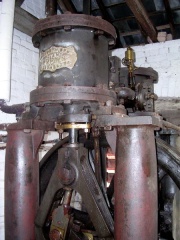 George and Elijah Ashworth were prolific patentees, mainly in the field of textile machinery.

1877 'The Royal Agricultural Show, Liverpool.... Messrs. Ashworth Brothers, of the Moss Brook Ironworks, Manchester, exhibit, in addition to the Simplex steam pump, of which they are the manufacturers, several washing and wringing machines, to which they have given the name of "The Leader." The principal advantages which are secured in these machines is that they are easier to work, are not so liable to disarrangement as some other wringing machines, and are more durable. By a very ingenious contrivance, an article of more than ordinary thickness may be passed through the machine without the rollers afterwards coming together with violence which does so much towards destroying the smoothness of their surface, the pressure on the rollers regulated by a spring instead of a screw weights. There are other advantages which place "The Leader" among the very best wringing machines. The same firm have also produced a "metallic comb-brush" for horses and cattle. The brushes, which are made of fine wire, are flexible and durable, and in every way a great improvement upon the ordinary stable brush, while from economical point of view their advent ought to warmly welcomed. [2]

1891 'MANCHESTER MACHINISTS & OPERATIONS MASSACHUSETTS. (from our special correspondent, New York, Wednsday). Messrs. Ashworth Brothers, of Manchester, have secured a tract of land from the Globe Yarn Mills, Falls River, Massachusetts, upon which they will erect large machine shops for the manufacture of carding and general machinery.'[4]