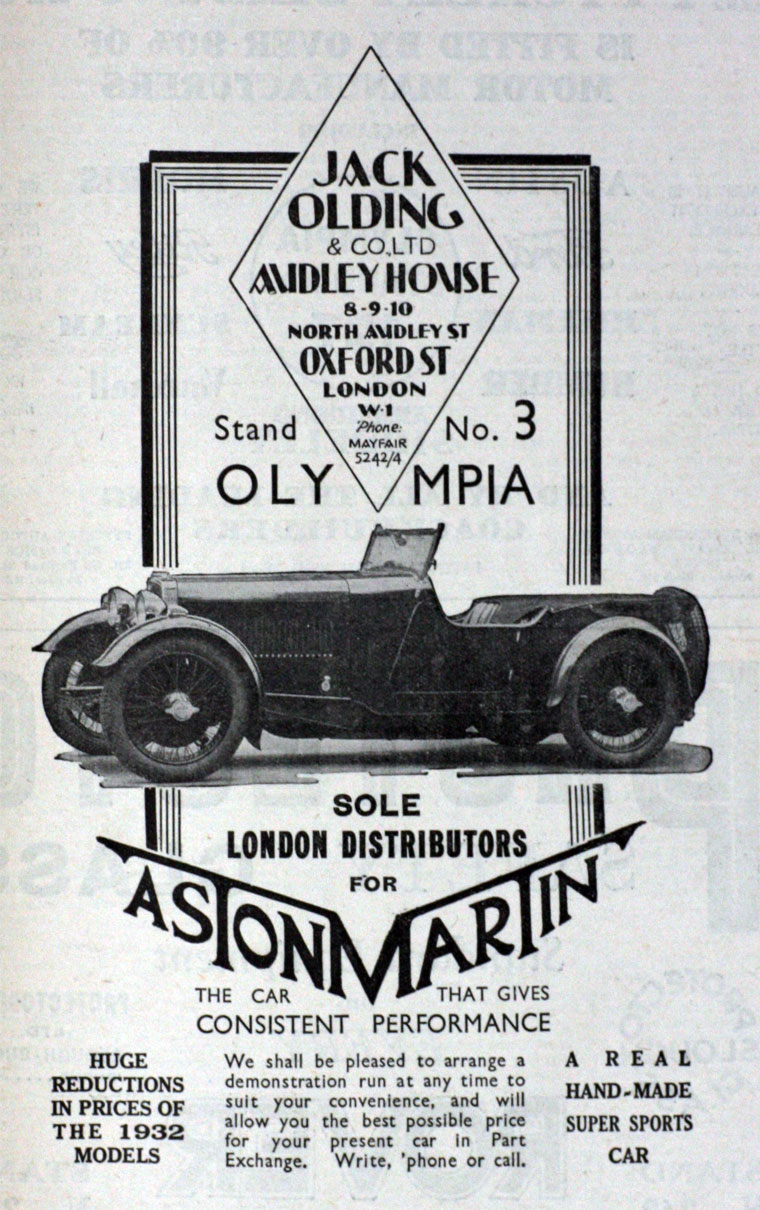 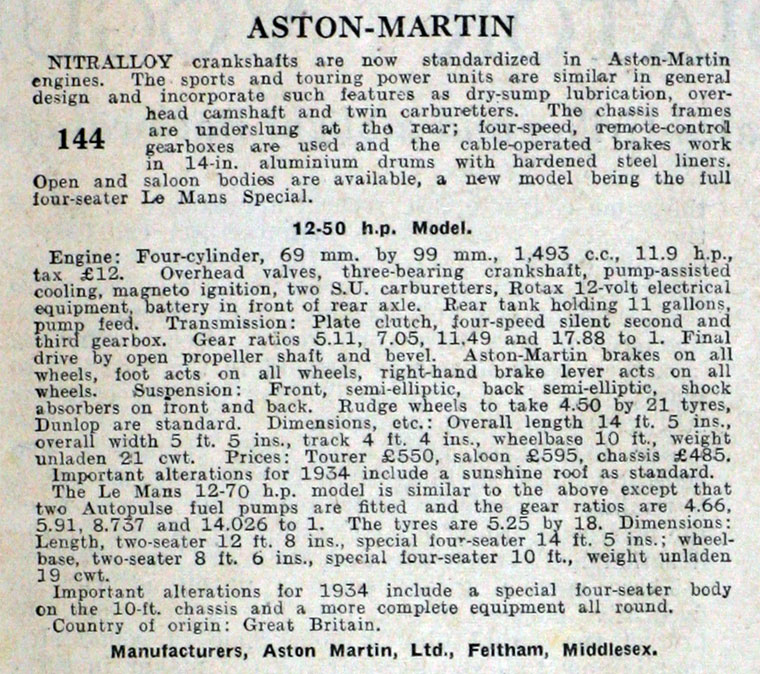 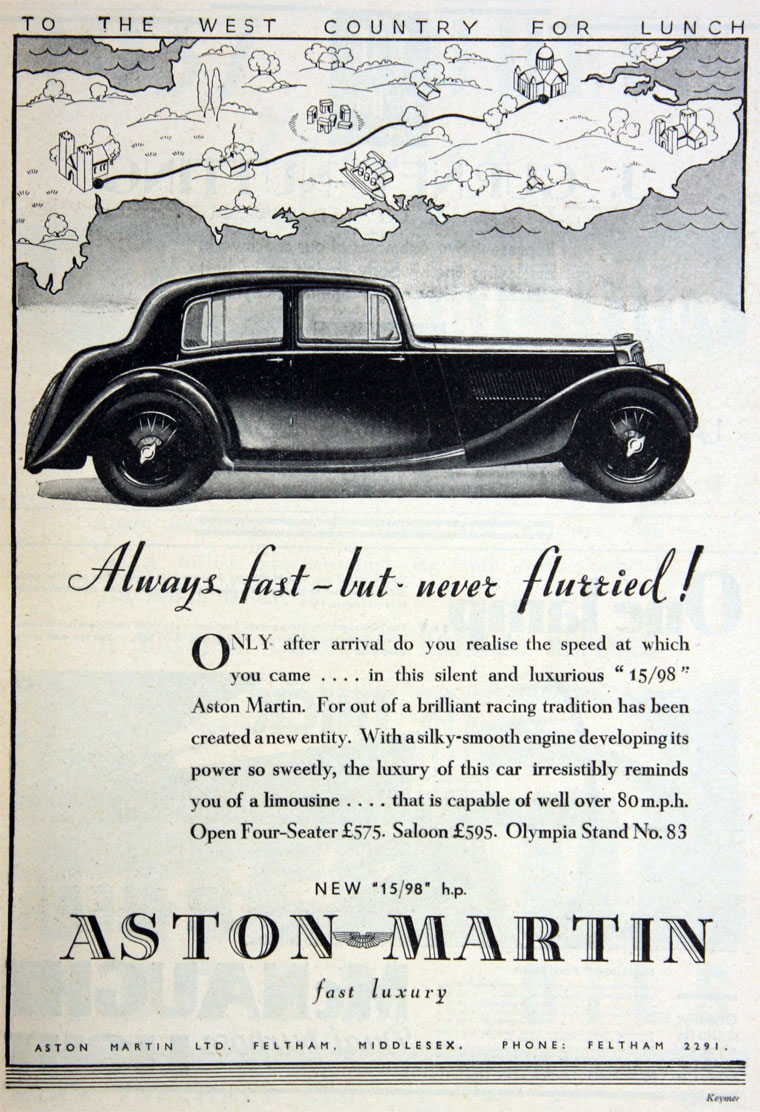 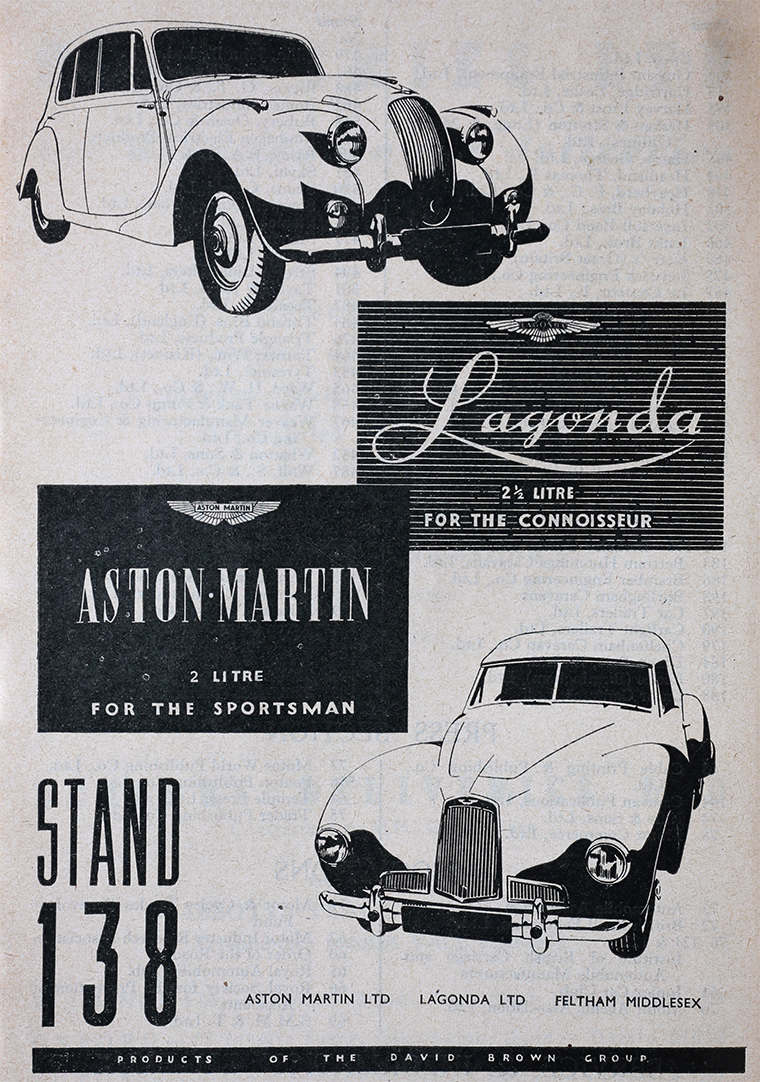 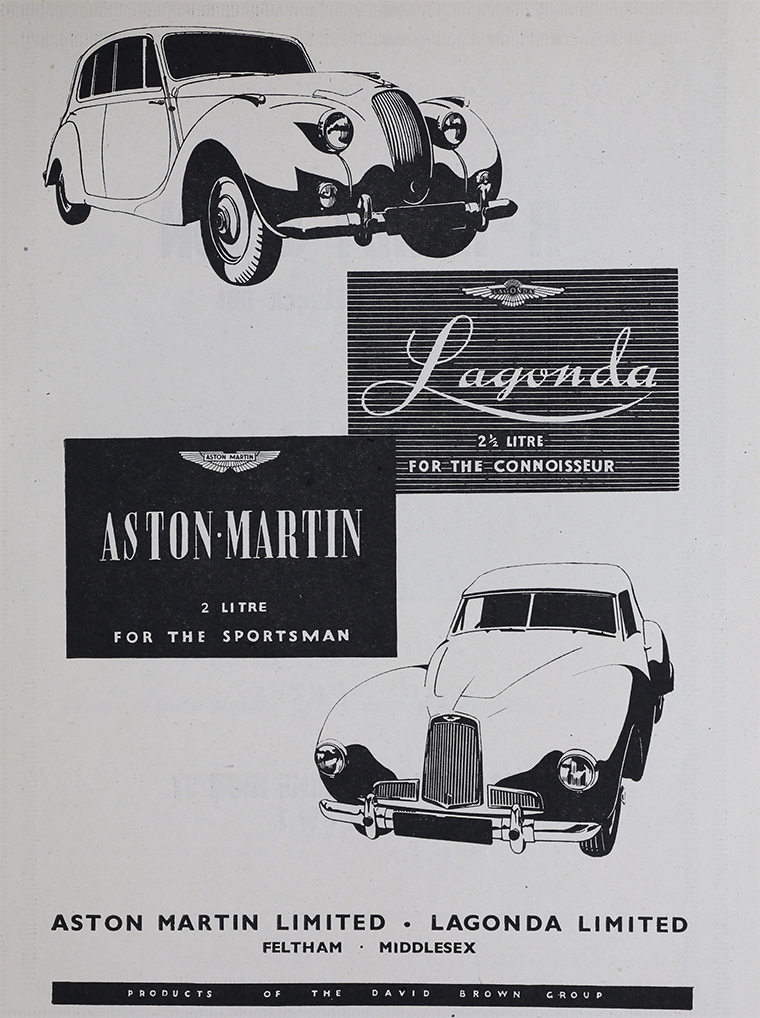 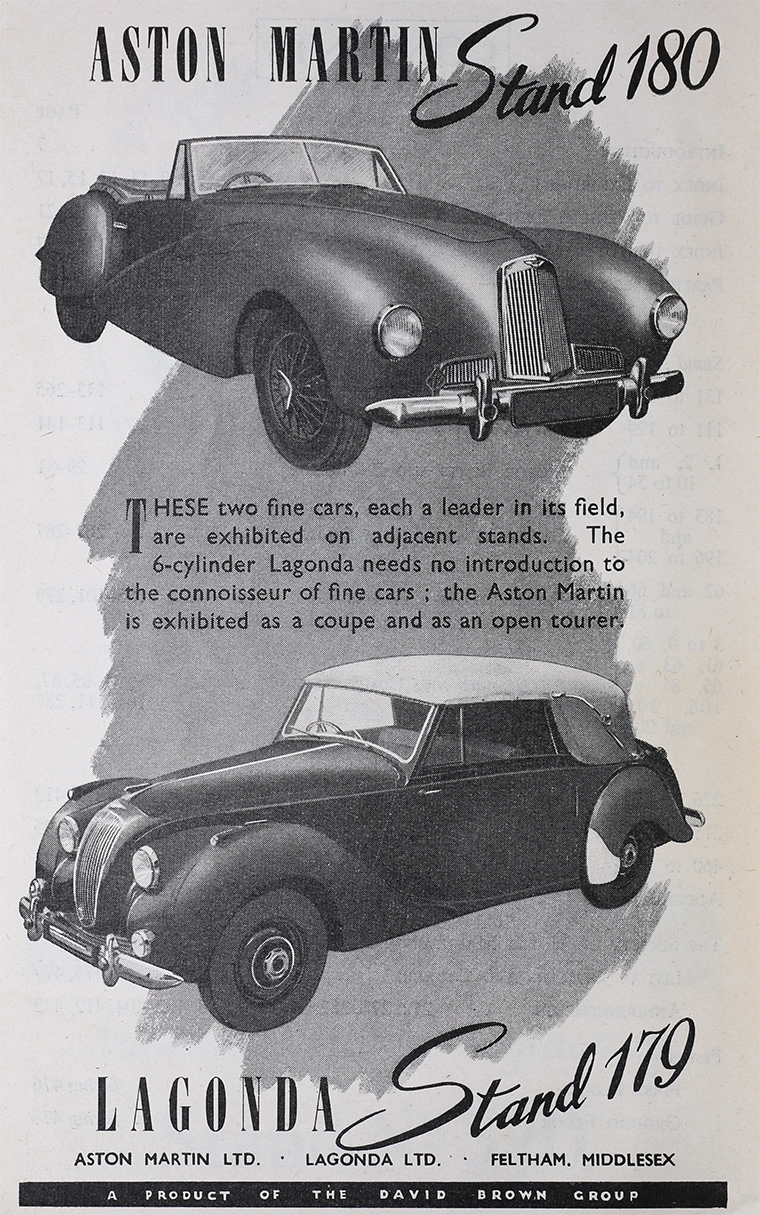 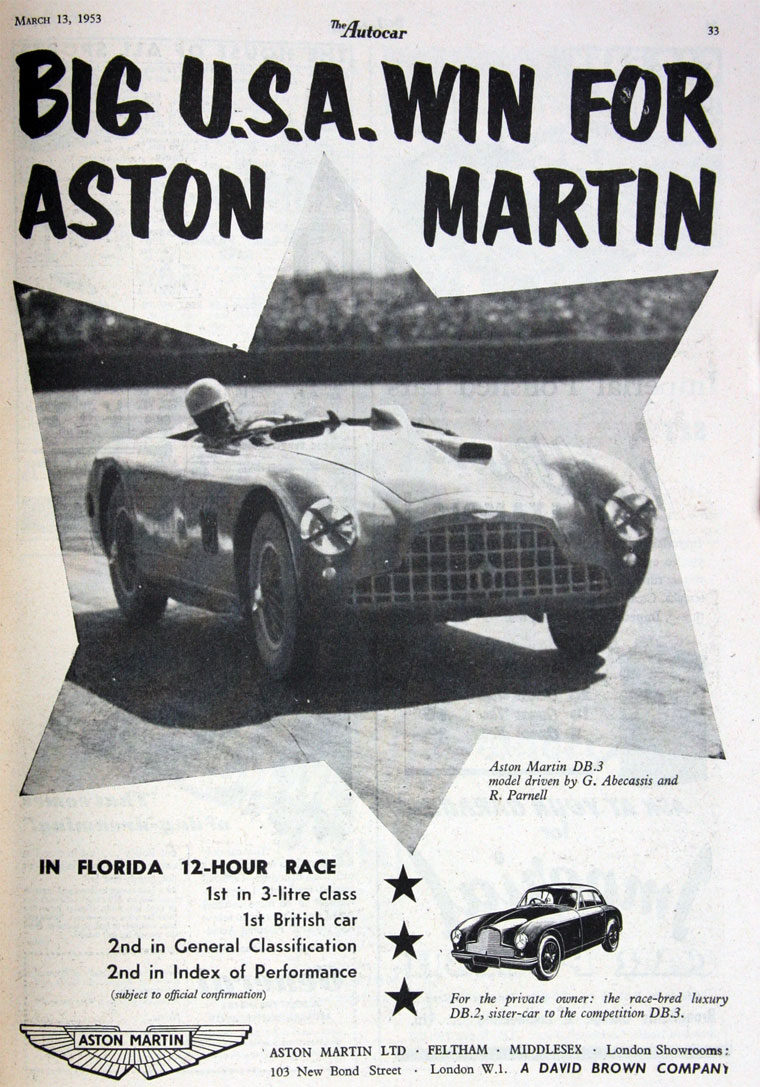 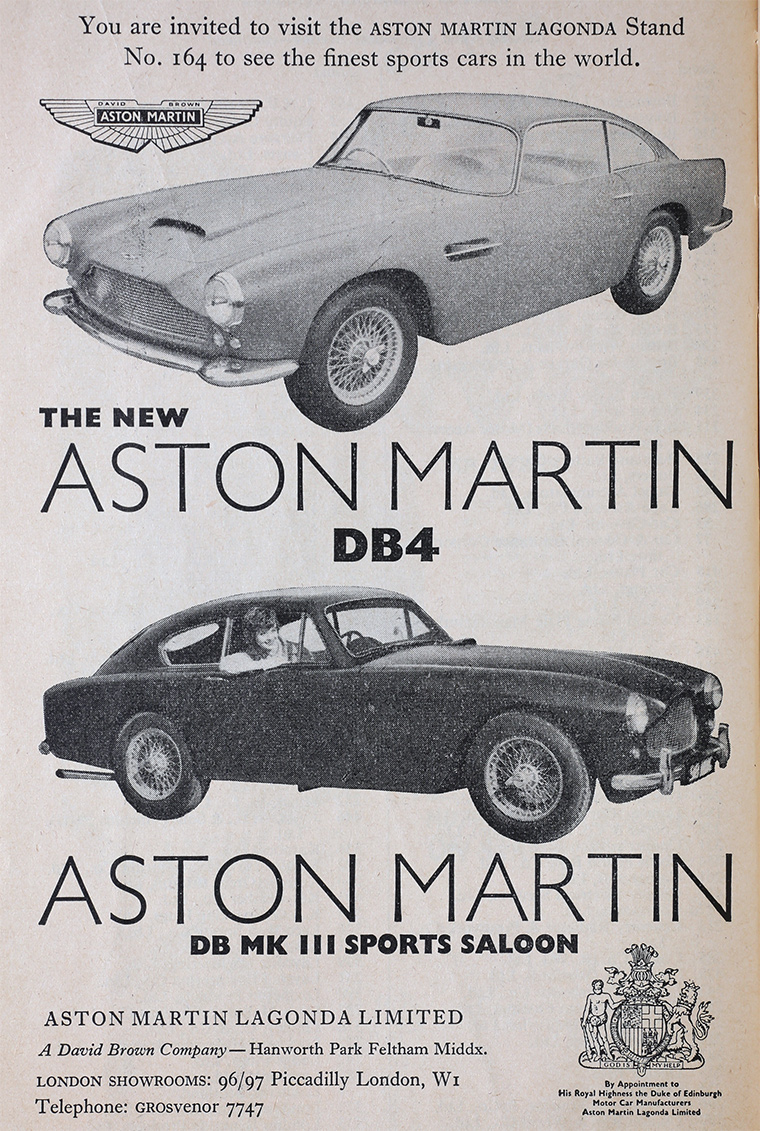 1913 The company of Bamford and Martin was founded as motor dealers, who went into production of cars. They acquired premises at Henniker Place in Kensington

1914 Following one of Lionel Martin's successful runs at the Aston Hill Climb in Buckinghamshire, the first Aston Martin car was designed and registered with the name.

1915 March: the first car was produced

WWI Full production could not start because of the War; Lionel Martin joined the Admiralty and Robert Bamford the Royal Army Service Corps. All machinery was sold to the Sopwith Aviation Company.

After the war the company was re-founded at Abingdon Road, Kensington and a new car designed to carry the Aston-Martin name.

1921 An Aston Martin car was ready for production but it was expensive and the company was struggling to stay afloat.

1922 The company was revitalised with funding from Count Louis Zborowski

1922 Bamford and Martin produced cars to compete in the French Grand Prix, and the cars set world speed and endurance records at Brooklands.

1924 The company went bankrupt and was bought by Lady Charnwood, who put her son John Benson on the board.

1926 Later that year a number of rich investors, including Lady Charnwood, took control of the company and renamed it Aston Martin Motors, and moved it to the former Citroën plant in Feltham. Benson brought in Augusto Bertelli as designer together with W. S. Renwick; their company, Renwick and Bertelli, was located in Birmingham.

The 1929 Aston Martin International was a successful racer and was followed by the Le Mans and the Ulster.

1932 Financial problems reappeared and the company was rescued by L. Prideaux Brune who funded it for the following year before passing the company on to Sir Arthur Sutherland.

1936 the company decided to concentrate on road cars. Car production had always been on a small scale and until the advent of World War II halted work only about 700 had been made.

1937 Bertelli left Aston Martin; he was replaced as design chief by Gordon Sutherland, famed for the 2.0-litre cars with dry-sump lubrication.

1947, David Brown and Sons bought the company under the leadership of managing director Sir David Brown - its "post-war saviour".

1955 David Brown and Sons bought Tickford, known for its coach building, and its site at Tickford Street in Newport Pagnell, and that was the beginning of the classic series of cars bearing the initials "DB".

1958 Announced the Italian-styled 3.7 L DB4. All the cars established a good racing pedigree for the firm, but the DB4 was the key to establishing the company's reputation