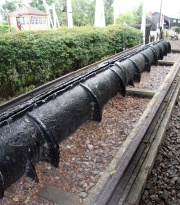 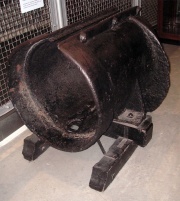 Section of tube from the Atmospheric Railway at the Museum of the Great Western Railway.

An atmospheric railway is a railway in which air pressure or vacuum is used to provide power for traction.

1810 George Medhurst published, but did not patent, 'A New Method of Conveying Letters and Goods with Great Certainty and Rapidity by Air'. This described a pneumatic railway consisting of an iron tube six feet high and five feet wide fitted with rails and able to take carriages by using compressed air behind them. In 1812 he issued a refinement to the design.

c.1836 On his return from Portugal, Samuel Clegg turned his attention to matters of traction but unfortunately chose to work on the Atmospheric system; despite much work, attempting to overcome its inherent defects, he was unsuccessful in producing a commercial system[1].

The first commercial application of the system was the line between Kingstown (Dún Laoghaire) and Dalkey in Ireland in the early 1840s; William Fairbairn and Sons built a stationary steam engine at Dalkey for this line; it had a huge flywheel, 36 ft dia, and developed 110 HP at 24 rpm with a steam pressure of 40 psi. Steam was supplied by three Cornish boilers. [2]

Between 1846 and 1850, Frederick Bramwell and Samuel Collett Homersham worked out a proposal for a subterranean atmospheric railway between Hyde Park Corner and the Bank.

The atmospheric system was also used by Isambard Kingdom Brunel on a 52-mile section of the South Devon Railway between Exeter and Plymouth and on the London and Croydon Railway in 1845, both in England, but was soon abandoned. Later in a similar approach was used for moving packages in tubes beneath the streets of London by the Pneumatic Despatch Co.

Although the supposed advantage of the atmospheric system was its hill-climbing ability, Brunel only tested the system on a relatively flat section. He simply assumed that the system would work on the very challenging gradients of up to 1 in 38, which the mainline to Plymouth was designed to contain.

The atmospheric system did not work, for the following reasons:

The extension of Isambard Kingdom Brunel's broad gauge railway westward from Exeter towards Plymouth by the South Devon Railway Company (SDR) was one of his interesting though ultimately unsuccessful technical innovations. Instead of using locomotives, the trains were moved by the Samuel Clegg and Jacob Samuda patent system of atmospheric (vacuum) traction, whereby stationary pumping engines sucked air from a pipe laid between the rails, the trains being moved by a piston in this pipe which was connected to the underside of a carriage.

The section from Exeter to Newton (now Newton Abbot) was completed on this principle, with stationary engines spaced every two miles, and trains ran at approximately 20 miles per hour. Fifteen-inch pipes were used on the level portions, and 22-inch pipes were intended for the steeper gradients west of Newton. Unfortunately, the technology required the use of leather flaps to seal the vacuum pipes. In view of the harsh environment of the line, which runs directly adjacent to the sea and is soaked with salt spray in even moderate winds, the leather had to be kept supple by the use of tallow, which is attractive to rats; the result was inevitable – the flaps were eaten, and air leaked in, destroying the vacuum.

Atmospheric-powered service lasted less than a year, from 1847 (experimental services began in September; operationally from February 1848) to September 10, 1848. The accounts of the SDR for 1848 suggest that the atmospheric traction cost 3s 1d per mile compared to 1s 4d for conventional steam power. Part of the problem was that the engines had to be run for longer than expected as they were not, at first, connected to the telegraph and so had to pump according to the railway timetable, until the train passed. As a result, many trains ran very late.

The system was never expanded beyond Newton, although several of the engine houses were built. Similarly, the proposal to use the same system on the Cornwall Railway was not pursued.

There are remains of several South Devon Railway engine houses, including one at Starcross, on the estuary of the River Exe. It is a striking landmark and a reminder of the atmospheric railway – which is also commemorated in the name of the village pub. A section of the pipe, without the leather covers, is preserved in the Didcot Railway Centre