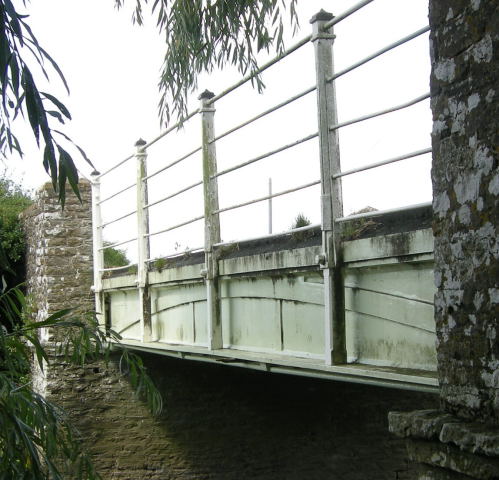 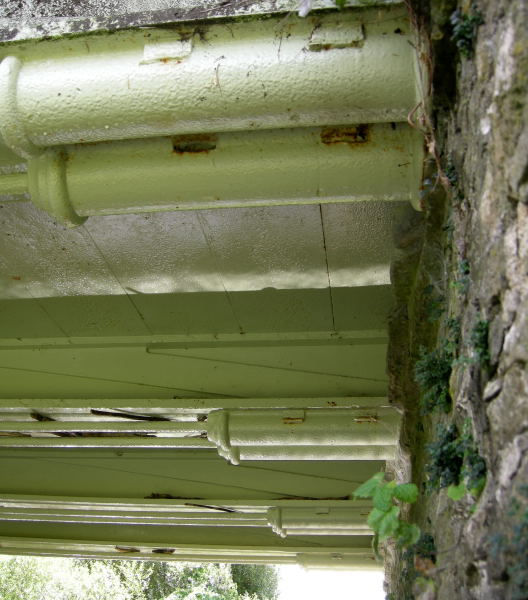 This is a small but significant iron bridge carrying a road over the River Lydden in Dorset.

Situated on a minor road between Stalbridge and Sturminster Newton.

Designed by William Dawes and cast at Coalbrookdale c.1850.

The beams are straight cast iron girders, with, unusually, the shape of a segmental arched rib cast into the web. However, the feature of particular interest is the presence of two wrought iron tie bars immediately below each lower flange. By tensioning these bars, they would subject the lower flange to compressive stress, thereby limiting the tensile stress when the bridge is carrying weight. In other words, the beams are pre-stressed. It is recorded that the ends of the bars are threaded. However, cotters are fitted to secure the tensioned bars in the flanges' cast iron bosses. These appear to be parallel rather than tapered cotters, so would have played no part in the tightening process. It is not known why cotters were used, rather than relying on nuts on the end of the bars.

Very discrete strengthening work was carried out in the early 1970s. Beneath the road surface, and above the transverse plates visible from beneath, is a reinforced concrete slab, cast in situ, lightened by the incorporation of expanded polystyrene blocks during casting.

Note: The underside of the bridge is not as readily accessible as the photographs might imply!