Grace's Guide is the leading source of historical information on industry and manufacturing in Britain. This web publication contains 137,279 pages of information and 220,169 images on early companies, their products and the people who designed and built them.

The flanged 'pipes' can be seen here 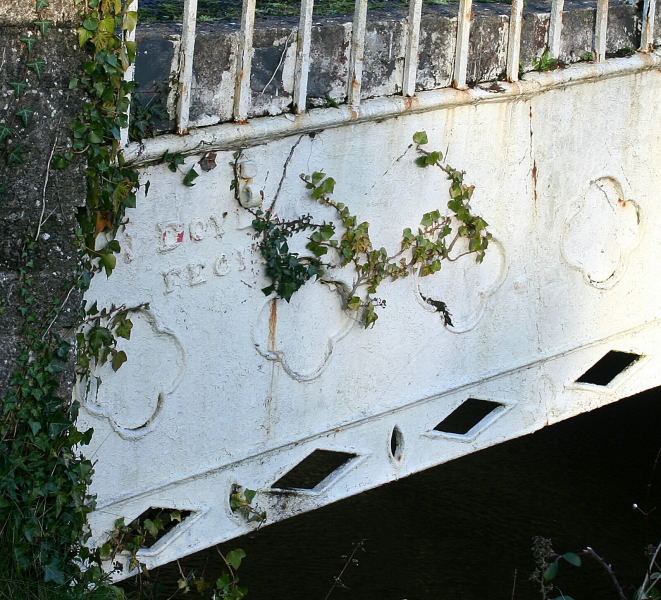 Made by J. Doyle of Limerick in 1818. 'Erected by M. Barrington'. Sir Matthew Barrington was the landowner.

This is a remarkable survivor, being a very early and rare example of a cast iron bridge whose arch ribs are assembled from lengths of flanged cast iron 'pipes'. This type of construction allowed the bridge to have a relatively shallow depth and low rise. The appearance is somewhat marred by the proximity of the adjacent concrete bridge.

There are nine of these pipe arches, connected transversely to each other by iron plates. These are clamped between the pipe flanges, and extend the full width of the bridge. The pipes are 1 ft diameter, in 6 ft lengths.

'METAL BRIDGE - RIVER MULCLAIR. - Among the various improvements,which, within a few years, have taken place in the New Town and Liberties of Limerick, perhaps there is none which attracts attention more forcibly man the Metal bridge erected over the River Mulclair, by Mathew Barrington, Esq. The component parts of this beautiful structure were cast by our ingenious townsman. Mr. James Doyle, of Clare-street. It is composed of one arch, capable of admitting two carriages to run a breast, the span of which is sixty feet; and though the first and only one ever area in this Island, which horses and carriages can pass, we may venture to say, that for strength and elegance, it stands unrivalled by any thing of the kind, even in the sister kingdom.— M'Donnell's Limerick Advertiser.'[1]

In 1811 Georg von Reichenbach published an idea he had for making bridge arches from flanged cast iron tubes. He apparently based the concept on tripods assembled from tubular elements which he had seen in Britain in 1792. However, he did not put the idea into practice until he built the Brunswick Bridge over the River Oker in Germany in 1824.[2]

The earliest known cast iron arch bridge with arch members of tubular cross section is Culford Hall Bridge, built in 1803-4. However the concept is very different to that of Barrington and von Reichenbach.