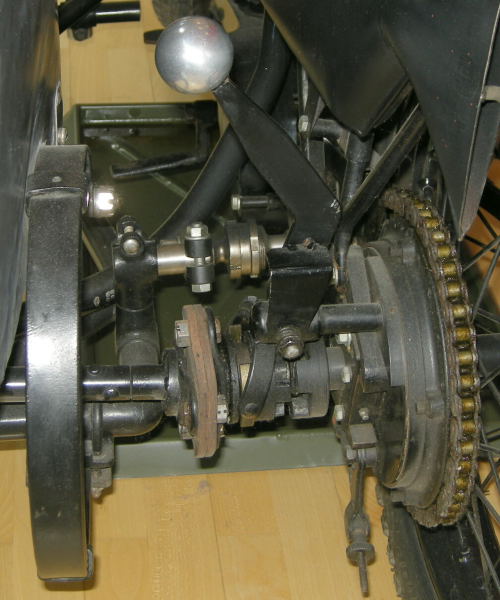 Closer view of dog clutch on 1929 motorcycle at Stroud Museum

1921 The business was moved to Lower Street, Stroud, Gloucestershire.

1921 A light cyclecar was tested. It had a single rear wheel driven by a chain from a three-speed Sturmey-Archer gearbox, powered by an 8hp sv Blackburne V-twin that was set across the frame. The simple bodywork incorporated a dickey seat, for occasional use by a second passenger. It is unlikely that the design got much further than the drawing-board.

Production was moved to the Lansdown area of Stroud.

There was a gap of nearly a decade during which time Baughan became prominent as a driver in sidecar trials. He later became involved with event organizing.

1929-1936 Baughan's motorcycles with sidecars had an optional drive for the sidecar wheel, under the control of the passnger. Baughan started to build machines to order - at the rate of about one per month. He also built solos and his models had engines ranging from 250cc to 500cc, with sv or ohv, and came from Blackburne, Sturmey-Archer or JAP.