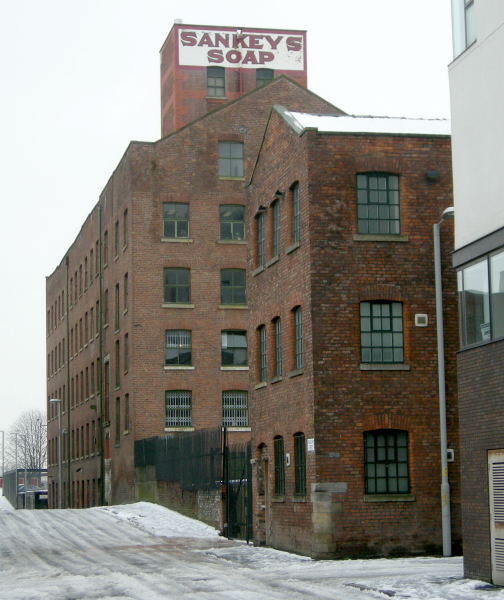 Beehive Mill (the tall building) in 2010, looking south east along Radium Street (formerly German Street). The hump in the road is the former branch canal bridge. Turning right at the far corner would take us along Jersey Street, where the front of the attached 1824 building can be seen, complete with date stone.

The first part of the mill was built in the early 1820s on Bengal Street in Ancoats, Manchester, in three sections to facilitate three different owner/occupants. The roof was supported on iron trusses, with cast iron used for the compression members (slender arches), and wrought iron for the tension members. This arrangement gave an unobstructed attic floor. This part of the mill was badly damaged by fire in 1841 (see below).

Another, smaller wing, the Jersey Wing, was added in 1824. This was of 'fireproof' construction, one aspect of which was the use of floors made from large square stone flags laid on a grid of cast iron beams, with no woodwork at all. This was a very early example of this type of grid construction. The fish-bellied cast iron beams ran longitudinally and transversely, and were supported on slender cast iron columns at the junctions of the beams. The beams were of T-section, and included a socket at mid-span to support the end of lighter cast iron joists. [1][2] This form of "fire-proofing" was to catch on, and many subsequent mills, factories and warehouses were to employ the system.

1843 Advertisement for sale of valuable freehold land, Bee Hive Cotton Mill, warehouse, cottages and buildings, with the privilege of precuring water from a branch of the Rochdale Canal. ..... 'And also the unconsumed and remaining part of all that MILL or FACTORY, called the Bee Hive Mill, lately used for the purpose of Spinning and Weaving Cotton. And also all that and those the fire-proof WAREHOUSE, and Two several Messuages, Cottages, or Dwelling-houses, with the Steam Engine Houses, Boiler Houses, Cotton Sheds, and other erections; together with the STEAM ENGINES, BOILERS, and fixtures, now standing and being in or upon on, the said mill and premises, the said mill having lately been partly burnt down, and which said mill and premises were late in the use and occupation of Messrs. Copley, Barrow, and M'Kinley, and their undertenants. The mill might be rebuilt in a moderate space of time, and the steam engines are in good repair and condition, and ready for work. The Shafting, Pulleys, Hangers, and Wheels, and iron floors, and other utensils, may be taken by the purchaser at a valuation, if he shall think proper. For further particulars and to view the premises apply at Messrs. Barrow and M'Kinley, Engravers to Calico Printers, Lloyd-street...'[4]