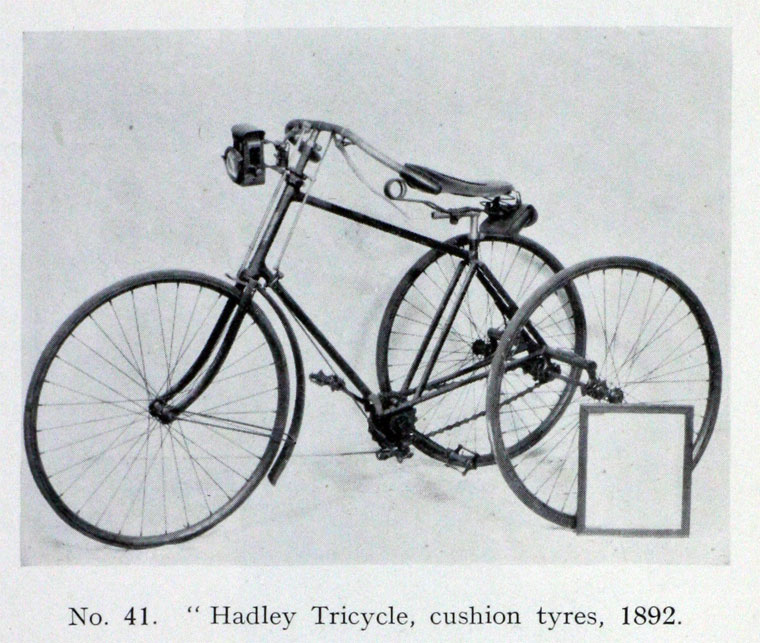 1894 Partnership dissolved. '...the Partnership heretofore subsisting between us the undersigned Sydney Dawson Begbie and Poyntz Charles Twentyman both of No. 89 Fortess-road Kentish Town in the county of Middlesex formerly carrying on business as Bicycle and Tricycle Manufacturers at No. 89 Fortess-road, Kentish Town aforesaid under the style or firm of Begbie Twentyman and Co. has been dissolved by mutual consent, as and from the 31st day of July 1893 as from which day the said business became vested in the Hadley Cycle Company Limited...'[1]

Accompanying this exhibit is an invoice dated 2nd August, 1892, on which the tricycle is charged at £30, less 33.3% trade discount, and plus 5/- for a bell. There is also a receipt for £19 15s., signed "Begbie, Twentyman and Co." and a further receipt for £4 6s., dated 6th December, 1892, from the Cycle Gear Co, of Payne's Lane, Coventry, for fitting a two-speed gear to the tricycle. The evidence provided by these original documents proves the history of the tricycle better than any description which I could write.

The founder of the firm which made 'Hadley' cycles was Sydney D. Begbie, a prominent member of the North Road Cycling Club, himself a successful rider and record breaker. His partner, P. C. Twentyman, was also an active cyclist: he finished fifth (behind G. P. Mills, M. A. Holbein, S. F. Edge, and J. E. L. Bates) in the first Bordeaux to Paris race in 1891.

Later they were joined by a third partner, and the firm became Snelling, Begbie and Twentyman. It went out of existence about 1898, Mr. Begbie gravitating to the motor industry in which he held a prominent position for many years.[2]