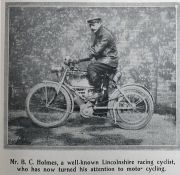 1876 Born the son of John Robert Holmes, a Schoolmaster

On Wednesday afternoon, Nov. 2nd the wedding took place at St. John's Church, Hammersmith, of Mr. Bernard C. Holmes, of Dowsby, and Miss Eleanor E. Knowles, of Overstone-road, Hammersmith. The bridegroom, is well-known throughout Lincolnshire and adjoining counties as a motor-cyclist, and it is doubtful whether any other local rider has covered so many miles of country since motoring came into fashion. Mr. Holmes was remarkably successful on the cycle track, and in the course of his career has won no less forty-five first prizes (including eleven scratch races), sixteen seconds, thirteen thirds, four lap prizes, and two fast-time prizes, making a total value of between £300 and £400.

He is now the acting manager of Messrs. W. R. Heighton, Limited, Peterborough, and although the exigencies of business have somewhat restricted the scope of his motoring operations this season, found time to participate in the one hundred miles non-stop run, promoted by the Peterborough and District Motor Club. It was a severe test of stamina of the Eider, and reliability of the machine, for when the final stage was reached, and T. Woodman (who rode Lightstring) continued on for six hundred and seventy-five miles before deciding a winner. Woodman then punctured in the neighbourhood of Bourne, and although he rode on to Folkingham and back, found riding on deflated tyre unsatisfactory, so he gave in, and Holmes was consequently declared the winner of the silver cup which the Club offered. a subsequent occasion gained gold medal for riding 200 miles in ten hours. This competition, which was also promoted the Peterborough Club, was from Peterborough to Yarmouth and back. Throughout this season Mr. Holmes has ridden 3.5 h.p. Vinco-Minerva, manufactured by his firm - Messrs. W. R. Heighton, Limited.

During the South African War volunteered for active service, and was accepted. He was not destined, however, to go through the campaign scathless, for the affair Nitral's Nek he was shot through the leg, and had to lay in hospital for several weeks. Happily the injury left no ill-effects, and upon his return home was not long getting into riding form. He then made effort to break the Land's End to John o' Groats motor-cycling record, but after riding gamely in very bad weather and along heavy roads, far as Warrington, he was obliged to give up on account of an accident, which sprained his leg, and damaged his motor. At that time, however, was 92 miles in front of record. As his wedding, on Wednesday, his personal friend – Mr. Sid. Ireland, of St. Neots - another motorist, discharged the duties of "best man." After their honeymoon, which is taking place at Brighton, Mr. and Mrs. Holmes will reside at Peterborough.