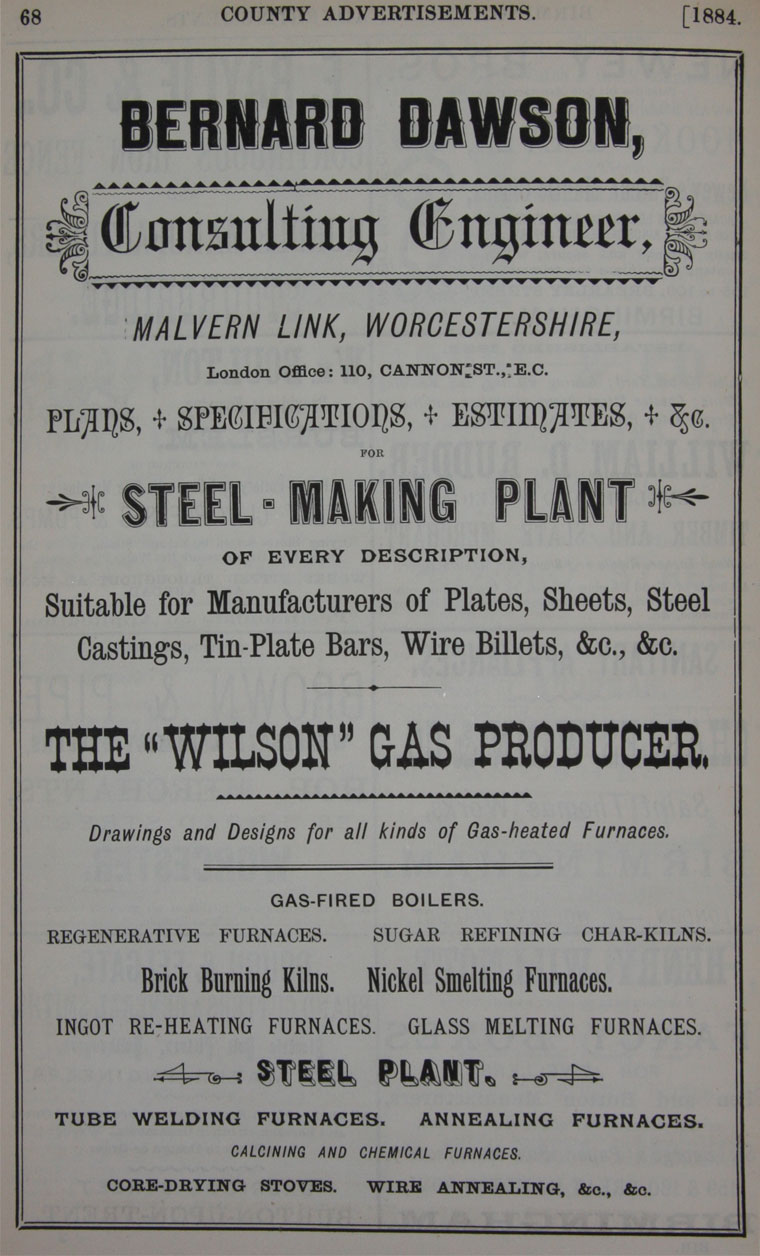 BERNARD DAWSON, the only son of the late George Dawson, M.A., was born at Edgbaston, Birmingham, on 19th January 1851.

He received part of his education at Bromsgrove Grammar School, on completion of which he was entered as pupil with Messrs. Hopkins Gilkes and Co., Tees Engine Works, Middlesbrough, with whom, after having served his time, he remained for a short period, being chiefly engaged in superintending some of their out-door contracts, principally in constructional iron work.

Following this, he became sub-manager to the Clay Lane Iron Works near Middlesbrough, leaving there to take up the managership of the Lincolnshire Iron and Smelting Co., at Frodingham.

Resigning that appointment in 1877, he was for a time with Messrs. Westray Copeland and Co., at Barrow-in-Furness.

In 1880 he commenced practice as consulting engineer at Malvern; afterwards, in 1883, his business increasing he found it necessary also to have an office in London. Having become interested in the patents of the Wilson gas-producer in the early days of his practice, he devoted himself more especially to the question of gaseous fuel, and in this direction he was instrumental in getting this process introduced into almost every branch of industry in the United Kingdom.

He afterwards brought out his well-known continuous working gas-producer, which has been adopted by most of the leading firms in the iron and steel trades at home and abroad, as well as by railway companies and general industrial works; and in January 1891 he contributed to this Institution a Paper on "Some different kinds of Gas Furnaces" (Proceedings 1891, page 47).

He made a speciality of Siemens' acid and basic open-hearth steel plants, together with gas-fired furnace work of all kinds, in connection with which he designed and carried out many important contracts both for this country and abroad, including the government arsenals at Cossipore in India, the Chinese Arsenal, Earl Dudley's Round Oak Works, and many others.

Latterly he also brought out a gas crucible steel-melting furnace, which is now successfully working in Sheffield, and bids fair to bring about important changes in this industry. He took a great interest in the welfare of railway....[more]

BERNARD DAWSON died, at the age of fifty years, on March 3, 1900, at his residence, The Laurels, Malvern Link, after a long illness. He was one of the leading authorities on blast-furnace and open-hearth practice, and had a considerable practice as an iron and steel works expert. He was a well-known figure at the meetings of the Iron and Steel Institute, and frequently took part in its proceedings. He also took an active part in organising the Birmingham meeting of the Institute in 1895.