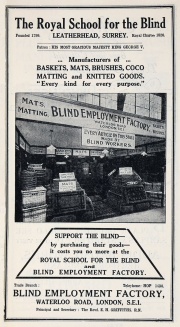 1799 The School for the Indigent Blind, the first institution of its kind in London, was one of four schools for the blind started in the United Kingdom, on the model of the school in Paris. The others were in Liverpool, Bristol and Edinburgh. A committee was formed, of which Thomas Boddington, Samuel Bosanquet, James Ware and William Houlston were the leading members.

1800 They started a small school, with 15 pupils in the Long Room at the Dog and Duck, St. George's Fields.

About a year later, they took over the lease of the tavern and its gardens, and soon the school had 35 male and 17 female pupils; who were completely clothed, boarded, lodged and instructed by the society.

1810 The head lease to James Hedger was due to expire and, as the City Corporation was contemplating letting the land to the Governors of Bethlem Hospital, the school committee, having discussed and decided against the idea of building on land in the Gray's Inn Road belonging to the Foundling Hospital, obtained a lease from the City Corporation of just under 2 acres of ground between the obelisk at St. George's Circus and the premises of the Philanthropic Society.

1811/12 The building, described as "more commendable for utility than for its beauty", was erected from the designs of George Tappen, at the angle between Lambeth and London Roads. It formed the entrance to the grounds of the school, the main buildings of which lay behind the houses in Crescent Place and had no frontage to Lambeth Road. The building encroached on the area of the circus as defined by Act of Parliament and the Trustees for the Surrey New Roads demanded its demolition, but they finally agreed to the insertion of a clause in a new Act which enabled the building to stand, and provided for the erection of concave flanking walls on either side of it.

1826 The institution was incorporated by Act of Parliament.

1831 It was given power to buy and sell land in and in the following year bought the freehold of the ground on which the school stood.

By 1833 the school included 55 males and 57 females and it became necessary to enlarge the buildings.

1835-38 An additional piece of ground was leased from the City Corporation, and extensive new premises, incorporating parts of the old, were erected from the designs of John Newman. The school continued to train blind pupils in the traditional trades of mat making, basket making, knitting, etc.

After 1874, many of its trainees were employed in a workshop which was established in the basement, the predecessor of the Blind Employment Factory in the Waterloo Road.

1901 the school site was purchased under compulsory powers by the Baker Street and Waterloo Railway, and the school was moved to Leatherhead.

1929 British Industries Fair Advert for the Trade Branch of the Royal School for the Blind, Leatherhead, Surrey. Manufacturers of Baskets, Brushes, Mats and Matting Rugs, Knitted Goods (machine and hand); Ladies and Children's Garments. Every kind for every purpose at competitive trade prices. (Basketware Section - Stand No. T.13) [2]