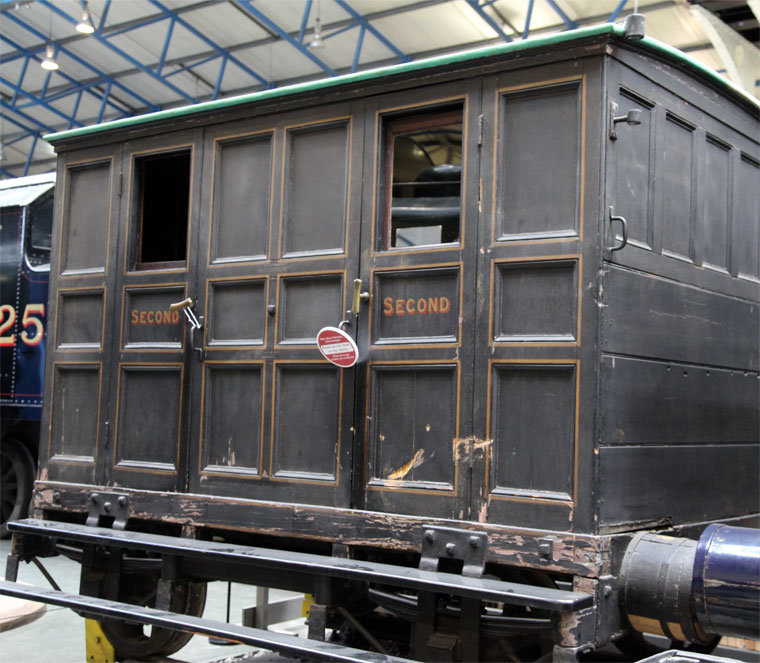 Sanctioned in 1832, the railway was part of a scheme advocated by William James - who, by the way, lived for some years at Bodmin and died there on March 10th, 1837 - for a railway between the English Channel at Fowey and the North Cornish coast at Padstow.

The Bodmin and Wadebridge Railway was the first steam-powered railway in Cornwall, opened in July 1st, 1834, running from the port of Wadebridge on the Camel estuary to the settlement of Wenford Bridge, where a china clay works later developed which sustained the route. The movement of sea sand for agricultural use is normally given as the primary reason for construction.

Although many miles distant from its activities the Bodmin and Wadebridge Railway was worked by the London and South Western Railway in the late 1840's, but without parliamentary sanction.[1]

In 1865, the line was modernised, and in 1886 was acquired by the London and South Western Railway, making it the oldest portion of the railway. One of the original coaches and some of the track stand inside Waterloo Station.[2]

It was unconnected to the rest of the LSWR system until 1895 when the North Cornwall Railway operated by the LSWR reached Wadebridge, and until then had an unstandardised array of rolling stock and locomotives. The line was connected to the Great Western Railway in 1888 when they opened a line from their Bodmin General station to Boscarne Junction.

It was noted for never having a passenger service on much of its length, only on the southern stretch between the two towns of its name. It was also noted for having "staithes", rather than stations, a term taken from canal terminology referring to the freight stations along its length. True "stations" were built for passenger services, of course.

When the rolling stock came to be standardised with the rest of the network, the age of the route gave some difficulties. There was a trial of SECR P Class 0-6-0 on the line, which was a failure because of the lightly-laid track and sharp curves, which made running difficult for locomotives not designed to accommodate it. As a result, three of the LSWR 0298 Class, Victorian locomotives designed for urban passenger duties, were retained on the line significantly past their life-expiry, and became a minor attraction in later years. They were eventually replaced by GWR 1367 Class dock tanks in 1962 after the line had been transferred to the Western Region of British Railways. This situation has parallels in the case of the Lyme Regis branch line.

The first closure took place on the 30th January 1967 when all passenger services were withdrawn and Bodmin North station closed. The line from Boscarne Junction to Wadebridge remained open for goods traffic until the 2nd September 1978, and the final section to Wenford closed on the 3rd October 1983 after cessation of china clay traffic.

Today the railway forms part of The Camel Trail from Wenfordbridge to Padstow, and it is the aim of the Bodmin and Wenford Railway to extend from Boscarne Junction to Wadebridge alongside the trail.