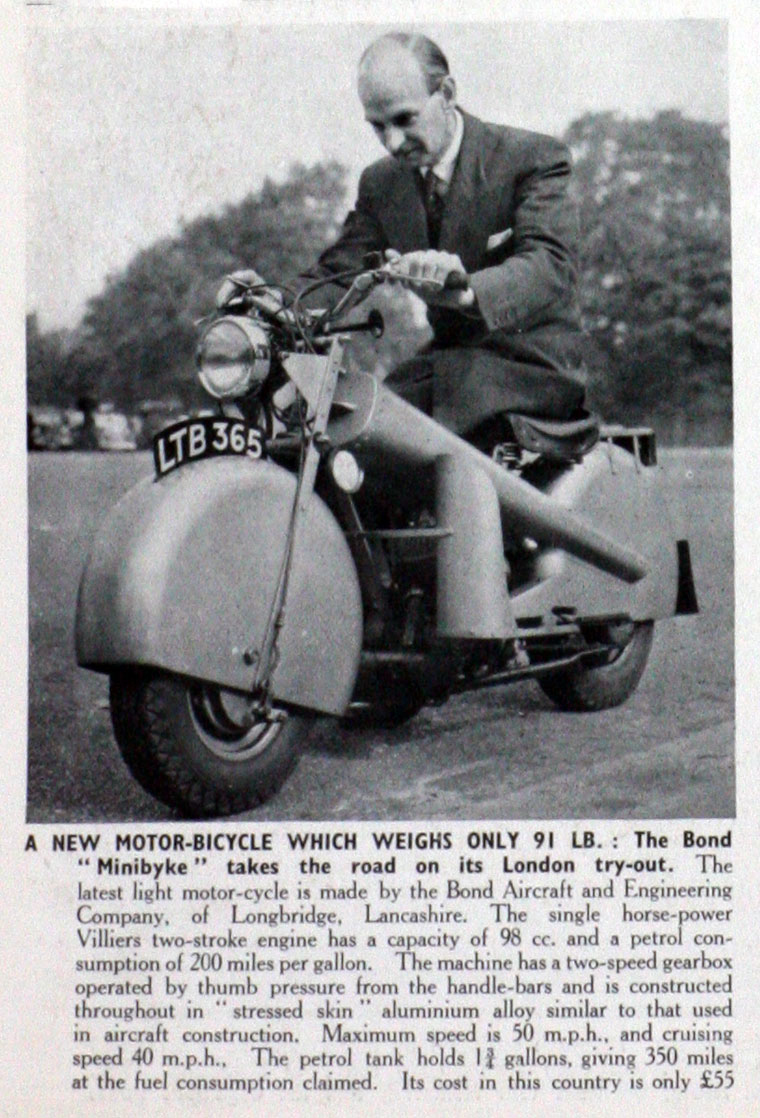 The Bond Cars design of motorcycle was manufactured by Ellis of Leeds under the Bond Aircraft and Engineering Co or BAC.

1951 A small but conventionally designed machine, called the Lilliput, reached the market. It was powered by either a 99cc Villiers 1F engine with a two-speed gearbox, or a 125cc JAP two-stroke with three speeds.

1952 Unreliable supplies of the JAP engine meant that only the smaller Villiers model was listed. This was joined by the Gazelle scooter with small wheels and a platform behind a front shield. It had a steel-barred grill around its 122cc Villiers 10D engine.

1953 Only the Gazelle was listed with a choice of 1F or 10D engine. The model was taken over by Projects and Developments of Blackburn, but the name soon disappeared.

1950 An odd-looking three-wheeled motorcycle appeared. It had an all-alloy frame, from which a sheet had been rolled into a large tube with the engine suspended. Most of each wheel was enclosed by an enormous mudgard. It had a two-speed, 99cc Villiers 1F engine, no suspension as such, 4-inch tyres and 16-inch wheels with split rims. During that year, telescopic forks appeared.

1951 A machine with a 125cc two-stroke JAP engine was launched, but supply problems hampered production. During that year Bond went on to design the BAC, manufactured by Ellis of Leeds under the Bond Aircraft and Engineering Co (BAC).

1953 Production of the original machine ceased.

1955 Late that year Bond reappeared as a two-wheeler. This was the Sherpa scooter fitted with a 99cc Villiers 1F engine under glass-fibre bodywork. The style was typical of the period, and although it went on show at Earls Court, it never progressed past the single prototype stage.

1956-1957 The name continued on three-wheelers and the firm moved to Preston in Lancashire.

1959 The company returned to making two-wheelers and produced a scooter that was typical in style, if a little heavy. Powered by a 148cc Villiers 31C engine, it had three speeds and a Siba electric start. It was then joined by another model with a 197cc Villiers 9E and four speeds.

1960 Both those models were revised in style and ran on for two more years.

1962 After this year no more motorcycles were produced.