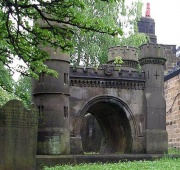 Memorial to those who died during the construction. 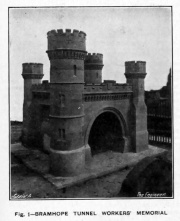 1845-9. Memorial to the men who died in the construction of the Bramhope Tunnel. Erected by James Bray the contractor. Exhibit at the National Railway Museum. 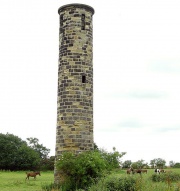 The Bramhope Tunnel is a railway tunnel 2.138 miles (3,745 Yards) long built for the Leeds and Thirsk Railway, the Leeds Northern Railway and the East and West Yorkshire Junction Railway, which together later became the North Eastern Railway.

1845-49 It was constructed on the Harrogate Line, carrying rural and commuter passengers between Horsforth and Weeton in West Yorkshire, England.

It is notable for its length, for its crenellated north portal, which is Grade II listed, and for the deaths of 24 men during its construction, commemorated in Otley churchyard with a castellated replica of the north portal.

It was constructed by Thomas Grainger, engineer and James Bray, overseer, who set up two sighting towers and then twenty shafts along the line of the tunnel. Men dug horizontally from these shafts until the diggings joined up in 1848. Thousands of navvies lived locally in bothies with their families, and dug in dangerous and wet conditions to facilitate the grand opening in 1849.

The tunnel was first proposed in 1843 with an estimate of £800,000 approved in 1845, though the final cost by 1849 was £2,150,313 and the lives of 24 men. Thomas Grainger was the engineer and James Bray was the contracted overseer in 1845 for the construction of the Horsforth–Weeton tunnel under Bramhope and the ridge between Airedale and Wharfedale. Bray was a Leeds iron and brass founder, and previously constructed the Thackley Tunnel, Bradford.

Two sighting towers were built for the engineers to keep the line true, then from 20 October 1845 twenty shafts were sunk to enable access for tunnelling. Tunnelling started after the foundation stone was laid at the bottom of No. 1 airshaft in July 1846. The separate diggings first joined up into one long tunnel on 27 November 1848, and it was completed in summer 1849.

The finished tunnel is 2 miles, 243 yd long; 25.5 feet wide by 25 feet high. It is a double track tunnel, with a gradient of 1 in 94 down from Horsforth to Arthington and at its deepest point, just to the north of Breary Lane, it is 290 feet below the surface.

The grand opening was 9 July 1849, but the first train went through on 31 May in the same year, full of Leeds and Thirsk railway officials, and pulled by Bray's locomotive Stephenson.

There were possibly up to 2,300 navvies plus their families, with 400 horses brought in for the work. That is said to include 188 quarrymen, 102 stonemasons, 732 tunnel men, 738 labourers and 18 carpenters. For four years they lived in 200 wooden bothies with their families in a field opposite Bramhope cemetery, alongside offices and workshops. There were 100 more bothies elsewhere along the line of the tunnel.

Day– and night–shifters were said to take turns to use the beds, as was normal for sailors of the time. However, sailors had their own bedding to unroll onto the bare bunk or hammock, whereas many navvies may have had little of their own. This tunnel was built at the height of the Hungry Years, and many poor Irish refugees were working on the railways.

Many of the navvies were farm labourers from the Yorkshire Dales, North East England, East Anglia and the Fenlands as well as from Scotland and Ireland. Men were lowered by bucket down the airshafts to dig by candlelight. They were paid £1.50 per week to shovel 20 tons of rock and earth per 12–hour shift, seven days a week.

Conditions were constantly wet, with foul air and gunpowder fumes plus the danger of roof–collapse. This was because the tunnel cuts through hard sandstone, shale and clay, and there are seven major faults in the rock near the centre point. Metal sheets had to be used to divert water inside the tunnel. A public waterworks scheme with reservoirs and aqueduct was proposed but not implemented.

The work was dangerous because the rock at the Horsforth end was difficult to blast, and there was frequent flooding and subsidence. It is suggested that up to 1,563,480,000 gallons of water were pumped out between 1845 and 1849. Five men died in 1846; 12 died in 1847; seven more had died by 1849, making 24 in total. In Otley churchyard is a monument in the shape of the north portal, dedicated to the 24 men who lost their lives. Records of death and injury were kept from 1847 to 1849, and Leeds Infirmary had a special spring cart to ferry the injured to hospital from the site to Leeds.

Drunkenness and fighting was such that Jos Midgeley, a railway police inspector, was hired for £1.25 per week to keep order. At one time he was attacked by a group of men, and at another there was a riot at Wescoe Hill in which a man died, all because the contractors tried to cut off the beer supply.

Water was taken at first from Bramhope's town well, opposite St Giles Church, but the excessive demand diminished the supply and spoiled the quality. The tunnellers' water was then pumped from a site near the Dyneley Arms crossroads. But at the same time the tunnel itself was draining away the local farmers' natural irrigation, and the source of Bramhope town well. Litigation on this subject continued for some years.

The number of workers' children overwhelmed that of the local children in Bramhope's school – however this was before the Elementary Education Act 1870 which provided for education for all, up to the age of 12 years. Poor children would have been educated at the parochial school in Eastgate, where the memorial gardens are now. The workers and their families attended St Ronans Methodist chapel at Bramhope, and the Methodist chapel at Pool-in-Wharfedale. The Leeds Mission spread Bibles and tracts in the shanty–town.

Four of the twenty shafts remain as ventilation shafts. These are:

The ventilation shafts measure 40 feet by 30 feet – wider than the tunnel itself.

One of the two sighting towers remains, in the field opposite Bramhope cemetery. The other one, now demolished, was behind Dyneley Hall. 250,000 cubic yards (190,000 m3) of spoil still lies along the line of the tunnel. One of a number of tips is in an area around the scout hut to the north of the Leeds–Otley road; a second is the Knoll near to Parklands and on to the field facing Bramhope cemetery; a third is on land adjacent to None–Go–Byes Farm.[

The Gothic north portal was said to have been built to please the landowner William Rhodes, who wanted to use one of the towers as a belvedere. It is built of rock–faced sandstone and has three side towers with turrets, and a horseshoe–shaped archway. The keystone features a portrait of a bearded man who is said to resemble the aforesaid landowner. There is a crenellated parapet with a carved cartouche in the centre featuring a wheatsheaf, fleece and fish. Both portals are on Network Rail land with no public access.

Trains have been cancelled or delayed frequently in recent years, due to flooding in the Bramhope Tunnel. Water still runs fast into the tunnel, and in the 1960s a train was derailed by a 3-ton icicle.

Major repair work was done in 2003 and 2006, with the Victorian drainage culvert replaced, and the track lowered to allow larger passenger and freight stock, costing £10 million.

The sixteen closed air-shafts were deteriorating and had to be re-capped.

It is said that there are three more full-sized portals inside, each with a carved plaque with the date of construction, that the rail workers' refuges become smaller as you go in, and that most of the tunnel is not brick–lined, but bare rock.