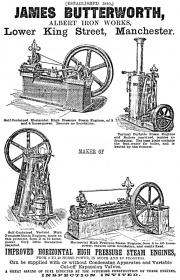 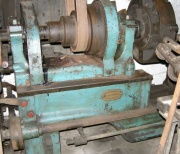 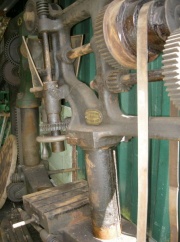 1860 Announcement of the opening of a new police station on the site of the former gas-works in Albert Street and Lower King Street with a frontage of two hundred feet toward Albert Street, is three-storeys high and to accommodate 130 policemen. [4]

1872 Advertisement 'Horizontal and Vertical high-pressure Steam Engines. Vertical portable engines and boilers combined, or separate, mounted on Cast-Iron base plates. Vertical fixed engines from 2 to 10 horse power; Horizontal engines from 3 to 40 horse power; Improved colliery winding engines up to 40 horse-power; Steam Donkey Pumps from from 3-in to 12-in ram properly tested in actual work, before delivery; upwards of forty steam engines from 3 to 20 horse power in stock to select from. All warranted. Prices low and ready for immediate delivery. Inspection invited. James Butterworth. Albert Street Ironworks, Lower King Street, Manchester' [12]

1876 Slater's Directory of Manchester & Salford, 1876, Part 1, lists James Butterworth as an engineer, lathe & tool and machinists’ tool maker, Albert Street Iron Works. Home address: 73 Elizabeth Street, Cheetham. In the 'Streets' section of the directory there is some confusion between Albert Street and Lower King Street, and the location of James Butterworth, Engineer, is given as No. 13. The address is identified as being between Gas Street and the Vine Tavern (which fronted onto Albert Street). Available detailed maps (1849 and 1922) show a triangular complex of buildings bounded by Albert Street, Lower King Street and Gas Street, with a group at the northern apex which were probably industrial buildings. If these industrial(?) buildings were the Albert Iron Works, then the ground area of the works is estimated to have been no more than approx 75 ft by 35 ft.

1870s Supplied a 30 HP horizontal steam engine to Winterbottoms Oxspring Wire Mill, Thurgoland, South Yorkshire [15]. George Watkins commented that 'The engine was the simplest possible, but the cylinder was a superb piece of foundry art'.

1883 and 1886. Slater's Directory lists James Butterworth as an engineer at 17 King Street West. The Classified section lists the company as Lathe & Tool Makers, Machine Makers, Pump Makers, Boiler Makers, Steam Hammer Manufacturers, Millwrights at Albert Iron Works, King Street West. [17] King Street West was formerly known as Lower King Street. Maps show that the premises, No. 17, between Bancroft Place and Gas Street, were shared with John Pollard, Glass Dealers. The range and type of products is most impressive in relation to the number of employees and to the postulated size of the factory. This raises questions about both the scale of production and the extent to which work was done in-house, as opposed to being contracted out.

1890 The 'Albert Gas Engine' was made by William Butterworth

At least one Albert Gas Engine has survived in preservation [18]