Grace's Guide is the leading source of historical information on industry and manufacturing in Britain. This web publication contains 142,070 pages of information and 227,774 images on early companies, their products and the people who designed and built them. 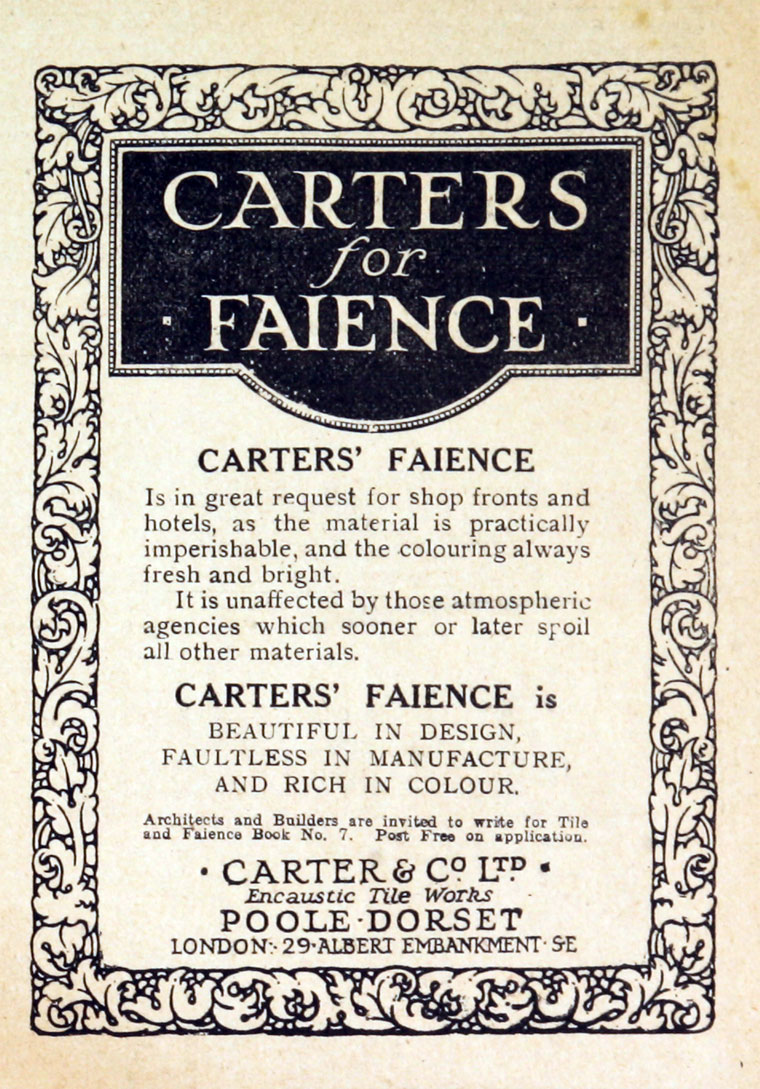 1873 Builder's Merchant and Ironmonger, Jesse Carter, bought a near-derelict pottery in Poole. He knew that there was a large deposit of clay just north of the town, and also had an excellent means of transporting goods out, and fuel in, via the harbour.

By the 1880's the factory was well known for its tiling products, mosaic flooring and advertising panels.

1895 A rival was based at nearby Hamworthy (the Patent Architectural Pottery). The Carter pottery soon outranked the Hamworthy one, and so the Carter family bought the competition.

1901 Jesse Carter retired and handed over control of the potteries to two of his sons, Charles and Owen. Charles preferred the management side, while Owen was more artistic.

1901-20 There were many coming and goings of the Carter family involving sons, uncles, brothers and the like, and World War I did little to help the situation. However, the Carter Co prospered and distinctive styles began to emerge.

1920 Charles Carter introduced Cyril, his son, to Harold Stabler, who in turn met John Adams. Stabler was a designer and silversmith, and Adams a designer and potter. Of as much interest was Adam's wife, Truda, who was to be a huge influence over the following years.

1921 The company of Carter, Stabler and Adams was set up as a subsidiary of the Carter Co to produce ornamental and domestic pottery. Until then, the Carter Co was mainly involved with the manufacture of tiling and architectural products. Carter Stabler and Adams (CSA), with a lot of input from Truda Adams, introduced a range of hand decorated, bright and vivid designs.

1964 Carter and Co, including Carter, Stabler and Adams, was taken over by the Pilkington Tiles group[1], and changed its name to Poole Pottery Limited.