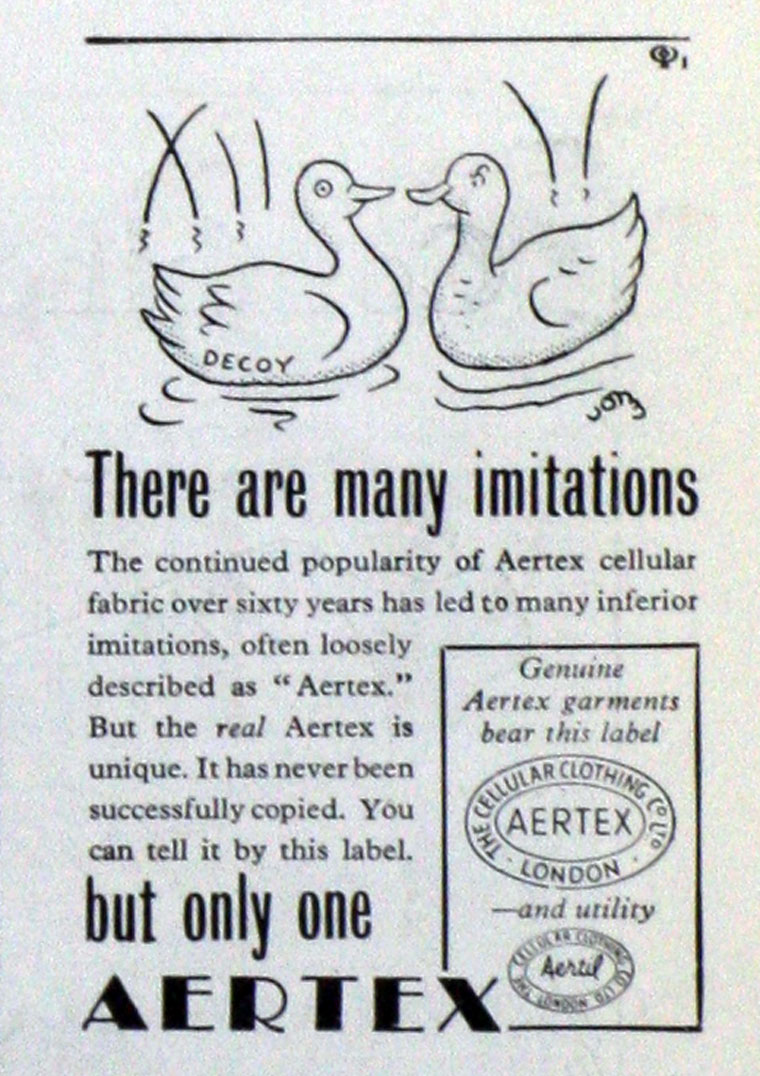 In the late 1800s, Lewis Haslam, mill-owner and politician, recalled an observation he had heard from an elderly aunt. He discussed with two medical colleagues the apparent contradictory nature of 'holes' and 'warmth'.

They began experimenting with 'aeration' within the weave of a fabric. They soon began to recognise the health values of heat and moisture, creating a fabric which provided a buffer between the warmth of the skin and the chill of the atmosphere. By chance, they had stumbled upon an idea which would change the way clothes were regarded. These, they reasoned, would be clothes that were healthy to wear.

Experts at the Bolton mill were assigned the task of creating woven clothes that would fulfil the promise of the theory. Initially wool cloth was used, but washing negated the desired properties immediately, so the answer was found with cotton. It took only one representative to travel from Lands End to John O' Groats to achieve nationwide sales in just twelve months, such was the novelty of their idea.

1888 The Cellular Clothing Co was set up.

By 1891, Aertex was firmly established in the wardrobes of the English middle-class. The company set up its own clothing manufacturing units in Nottinghamshire. The idea of being 'clothed in air' raced around the globe. Garments and items for the home were manufactured as far as New Zealand and Australia, using fabrics shipped from Lancashire. The company's own shops, offering the widest selection of merchandise, occupied prime positions in London's Piccadilly and beyond.

Advertising was in its infancy, but the owners spent heavily in the most influential media of the day.

Aertex has been used in a variety of products over the last century. During the beginning of the 20th century Aertex established itself well amongst the middle classes, and was even adopted by royalty and politicians.

By the 1890s, Jaeger was marketing a range of woollen underwear for women. The woollen Jaeger corset was reinforced with cording rather than whalebone struts. Aertex fabric filled the spaces between the whalebone struts of other popular corsets of the time.

1939 The British Land Army was formed, and the women were issued with a uniform which became synonymous with healthy outdoor living including a fawn Aertex Shirt.

The British 7th Armoured Division, known as the Desert Rats, was formed in the desert of North Africa just before World War II. Aertex drill bush shirts and jackets were worn in the desert's extremely hot weather conditions to help keep the soldiers cool.

Pilots and navigators wore Aertex. They could be subjected to temperatures of up to -40c, so crews piled on layers of clothing, wearing an Aertex vest underneath.

Post war, the brand gradually emerged as a symbol of prosperity and featured at the Festival of Britain in 1951. Both men and women, who considered themselves at the forefront of fashion, would be seen wearing Aertex shirts (and underwear). No child could be considered properly packed off to school without fresh layers of Aertex for every term.

2001 Aertex Ltd bought out the business.