Miniclave 80. Exhibit at the Thackray Museum 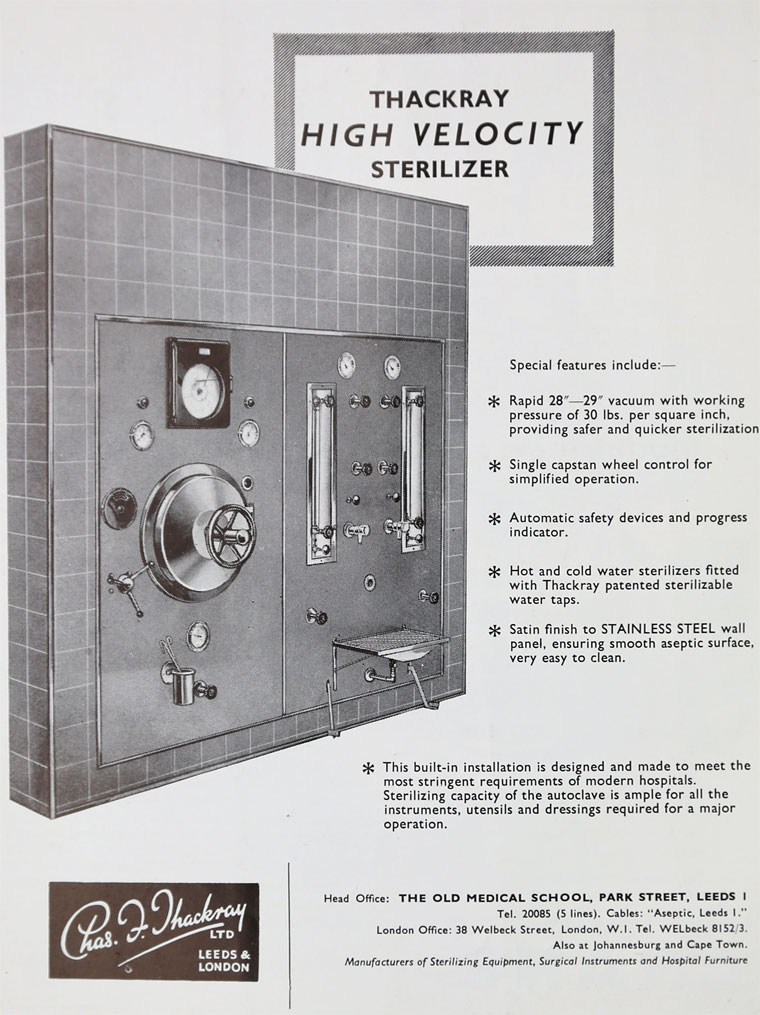 1902 The firm was founded by two school friends, Charles Frederick Thackray and Henry Scurrah Wainwright, who went into partnership and bought an existing chemist’s shop at 35 Great George Street, Leeds, opposite the Leeds General Infirmary. Chas. F. was a qualified pharmacist and Wainwright was a chartered accountant.

By 1908 they were manufacturing instruments and sterilised dressings.

In 1914 he had 25 employees, including 8 instrument makers and 2 reps. The chemist’s shop remained open until 1963, but the other parts of the business expanded into other buildings in Gt. George St.

By the late 1920’s these premises were insufficient and in 1926 they purchased the Old Leeds Medical School in Park Street, a few hundred yards down the road.

c.1933 This was expanded with new works and remained the headquarters until 1985, when the building was compulsorily purchased by Leeds City Council, and the headquarters moved to a new building at 1 Shire Oak Street, Headingley, Leeds.

A London branch was opened at 119 High Holborn, London WC1 about 1910, and was at various central London addresses until finally closed in 1988. A Glasgow branch opened in 1968.

One of the specialities of the firm was orthopaedic surgery, particularly the Charnley hip replacement, but they also made shoulder and elbow replacements. The firm was finally sold by the family in 1990 to DePuy of Warsaw, Indiana, USA, who are also a major player in orthopaedic instrumentation and implants.