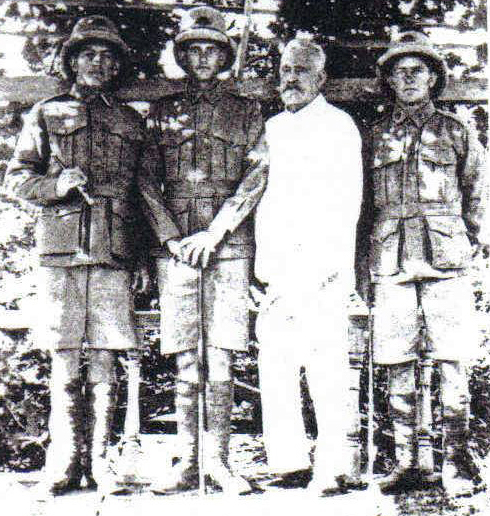 Photo of John Carr with three of his nephews from Australia in Egypt during WW1 The three nephews were Arthur Percy (Punch), Charles Rowland (Barl) and Edgar Norman (Sticks) who were in the Light Horse Brigade.

1834 Married in Duffield to Pauline Lomas

1841 Nail manufacturer of Belper. With Paulina and three children.[2]

1857 Bankruptcy. 'In the Matter of John Bridges and Charles John Carr, of Belper, in the county of Derby, Millwrights, Nail Manufacturers, Dealers and Chapmen...'[4][5][6]

1859 Patent. '1538. And George Dawes, of Milton Iron Works, in the parish of Hoyland, in the county of York, Ironmaster, and Charles John Carr, of Hoyland aforesaid, Engineer, have given the like notice in respect of the invention of "certain improvements in atmospheric and vacuum hammers and stamps, part of which improvements is also applicable to steam and other engines."'[8]

1860s Three of his sons - John Carr, Charles "Spencer" Carr and Henry Thomas Carr had relocated to Egypt and taken up engineering posts there.

1861 Living in at Milton Iron Works, Nether Hoyland, Yorkshire, as an Engineer. With his wife Paulina and three children.[9] See Graham and Co

1871 Living in Cheetham, Manchester, mechanical engineer, with his wife Paulina and three children.[10]

Possible invention of a special horseshoe by John Carr for horses in desert conditions.