Grace's Guide is the leading source of historical information on industry and manufacturing in Britain. This web publication contains 150,692 pages of information and 235,204 images on early companies, their products and the people who designed and built them. 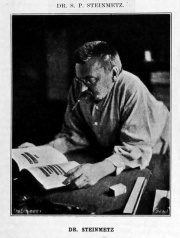 He emigrated to the USA in 1889 and changed his name from Carl August Rudolph Steinmetz.

"The death of Dr. Steinmetz, the eminent electrical engineer, mathematician, and prolific writer and lecturer on electrical subjects, occurred last week at Schenectady. Dr Steinmetz studied at Breslau, Berlin, and at Zurich, but at the age of twenty-four he landed in America in the year 1889. The ship La Champagne arrived one Saturday afternoon and put the cabin passengers ashore, but on the account of the regulations that were then in force, the steerage passengers, among whom Steinmetz and his friend Asmussen were included, were kept on board for inspection until the following Monday. Steinmetz' first experiences in America were not happy. He could speak but little English, so little, in tact, that when asked by an official whether he knew the language, he could only reply, " A few." As Dr. Steinmetz often related, he did not possess the ten dollars necessary for a safe landing, and from his appearance it did not seem likely to the officials that he would ever be capable of earning such a sum if he was allowed to land....[more].

CHARLES PROTEUS STEINMETZ, who was elected a Member of the Institution in 1912, was born in Breslau, Silesia, on April 9th, 1865.

At the time of his death on October 26th, 1923, at the age of fifty-eight, 34 years had elapsed since Carl Steinmetz landed in New York in June 1889 from the steerage of a French liner and adopted America as his country and Charles Proteus Steinmetz as his name. In the preface to "America and the New Epoch" he states that he then "had ten dollars and no job, and could speak no English."

Dr. E. W. Rice thus describes his first impressions of Steinmetz:- "I shall never forget our first meeting at Eickemeyer's workshop in Yonkers. I was startled, and somewhat disappointed, by the strange sight of a small, frail body surmounted by a large head, with long hair hanging to the shoulders clothed in an old cardigan jacket, cigar in mouth, sitting cross-legged on a laboratory worktable. My disappointment was but momentary, and completely disappeared when he began to talk. I instantly felt the strange power of his piercing but kindly eyes, and, as he continued, his enthusiasm, his earnestness, his clear conceptions and marvellous grasp of engineering problems convinced me that we had indeed made a great find. It needed no prophetic insight to realize that here was a great man, one who spoke with the authority of accurate and profound knowledge, and one who, if given the opportunity, was destined to render great service to our industry. I was delighted when, without a moment's hesitation, he accepted my suggestion that he come with us."

Steinmetz's 34 years in America was a period of prodigious performance on his part. In any attempt to obtain a measure of his activities as an inventor, the 195 American patents taken out in his name should be multiplied many times to take into account the inspiration which he communicated to his assistants and colleagues of all ranks and ages. The wide variety of his inventions may be indicated by mentioning the following amongst the subjects of the Steinmetz patents: phase transformation, methods of regulating the power factor of a distribution system, compensated alternating-current motors, magnetite arc lamps, flaming arc electrodes containing titanium carbide, seals for fused quartz lamps, and many patents relating in general to generators, motors, synchronous converters, induction regulators, frequency changers, transformers and measuring instruments.

He presented 44 technical papers before the American Institute of Electrical Engineers and was its President in 1901. He also made many contributions to the Proceedings of the Illuminating Engineering Society, of which he was President in 1915. He also often contributed notable papers and made important addresses at Conventions and meetings of the National Electric Light Association, at meetings of sections of the American Institute of Electrical Engineers, and of university technical societies.

Some of his most fascinating addresses were of a popular character. On one well-remembered occasion when he addressed a large audience in Schenectady at Edison Hall, the subject was "Soap Bubbles." Steinmetz, with one knee on the seat of a chair, blowing bubbles under all sorts of conditions, directed the attention of a fascinated audience to the various phenomena involved. In addition to many engineering papers in the Transactions of technical societies, he contributed almost innumerable articles to other publications and on all manner of subjects. We find such titles as: "Physiology of Light," "The Second Law of Thermodynamics and the Thermodynamics of the Atmosphere," "Commission Control," "Competition and Co-operation," "Industrial Efficiency and Political Waste," "The World Belongs to the Dissatisfied," "Socialism and Invention," "Electricity and Civilization," "The Tungsten Gun," "The Ether," "Our Civilization," "Shorthand," "Democracy," "Science and Religion," "Twisting Magnetism," "Biography of Rudolf Eickemeyer," "Electrical Consonance," " Soviet Plan to Electrify Russia," and " Mobilizing Niagara to Aid Civilization." Eleven treatises of a very authoritative character on electrical subjects were published by Steinmetz and the majority of them were revised and greatly extended in several successive editions. Already in 1888 he had published a book on "Astronomy, Meteorology and Cosmogony."

The Steinmetz law of hysteresis is well known, as are also his contributions to the development and use of the complex-quantity method of treating alternating-current problems. Steinmetz's activities were by no means confined to engineering. He took a very deep interest in human questions and in economics, and gave his cordial support to all movements whose success he considered would be of advantage to mankind. In this category he included the adoption of the metric system. At the University of Breslau he studied mathematics, astronomy, physics, chemistry, medicine and economics. Subsequently at Zurich he studied mechanical engineering at the Polytechnic.

In later life, at Union College in Schenectady, he was professor of electrical engineering and afterwards of electro-physics. As the candidate of the Socialist Party in 1915 Steinmetz was elected President of the Common Council of Schenectady. He served two terms as President of the Schenectady Board of Education.

In 1902 Harvard University conferred on him the degree of Master of Arts, and in 1903 Union College awarded him the degree of Doctor of Philosophy. It was the writer's privilege to be much with Steinmetz as one of his assistants in 1892 and the immediately following years, and again to have associations with him in the years preceding his death.

In the writer's opinion the best pen-picture of Steinmetz in these later years is that drawn by Mr. M. P. Rice as follows:- "The unassuming figure without hat or overcoat, that was so well known about the streets of Schenectady, was literally a world power. To him every country looked for authoritative dicta on all matters of electricity. The man who welcomed friends to his summer camp with an almost boyish glee, whose kindly soul went forth in the fondling of a favourite dog, whose life and likings were the most simple - this man was an international figure, a giant in his profession, a conservator of the world's natural resources, and a friend to every user of electricity. We mourn his passing, we are deeply grateful for the wealth of knowledge that he has contributed to the world's progress, and we treasure as a choice possession the memory of an earnest, simple man who devoted his transcendent mind and talents to the service of his fellow men."

For many years Steinmetz had made his home in Schenectady, New York, with the family of Mr. J. L. R. Hayden, his adopted son. Mr. Hayden was his constant companion and also his collaborator in many of his investigations and papers. Their home included a fine library and a well-equipped chemical and physical laboratory, and Steinmetz divided his attention between the home laboratory and various laboratories at the Schenectady works of the General Electric Company of America.