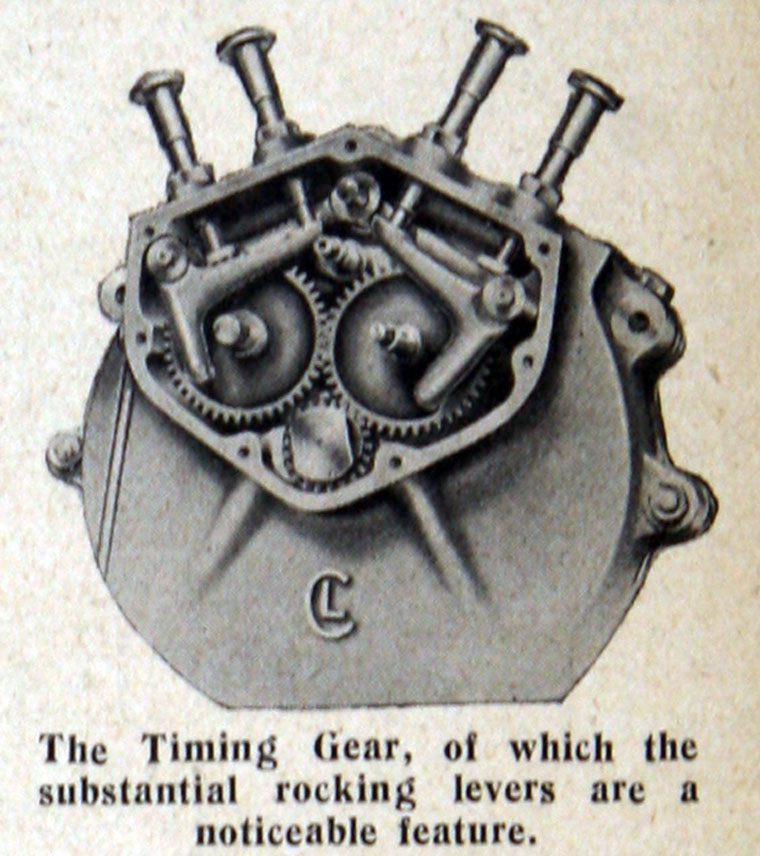 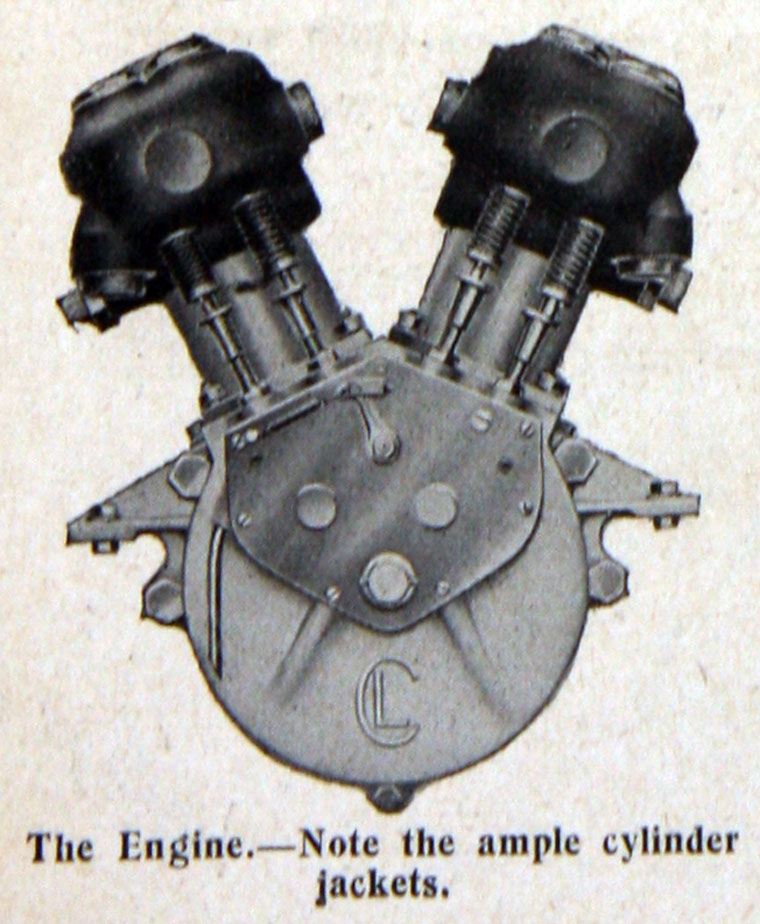 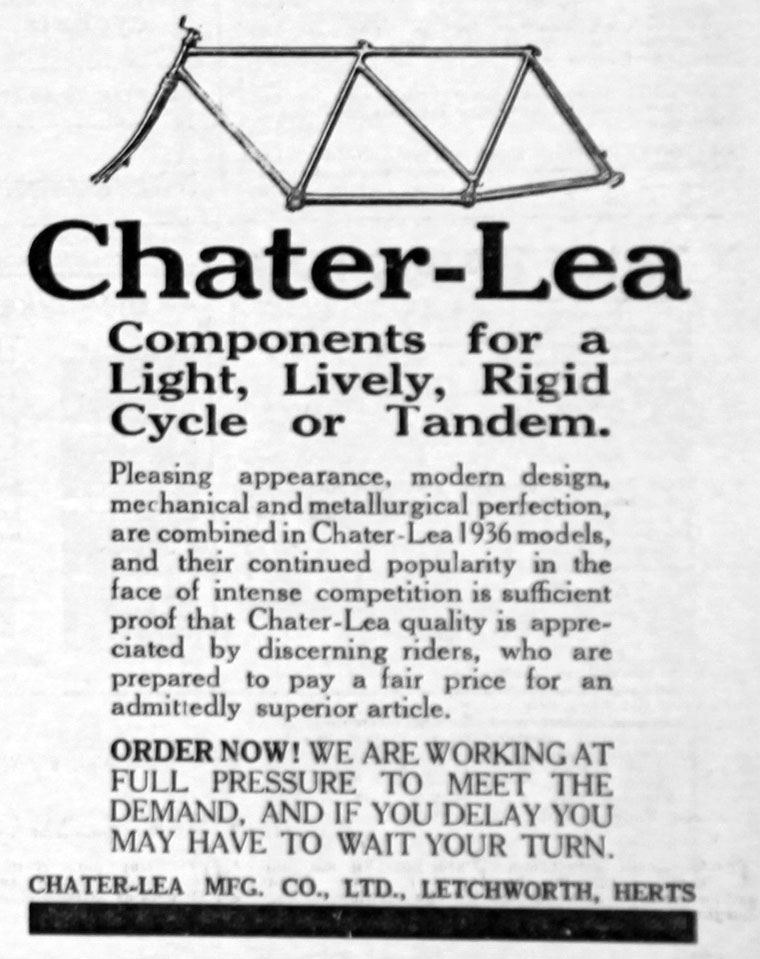 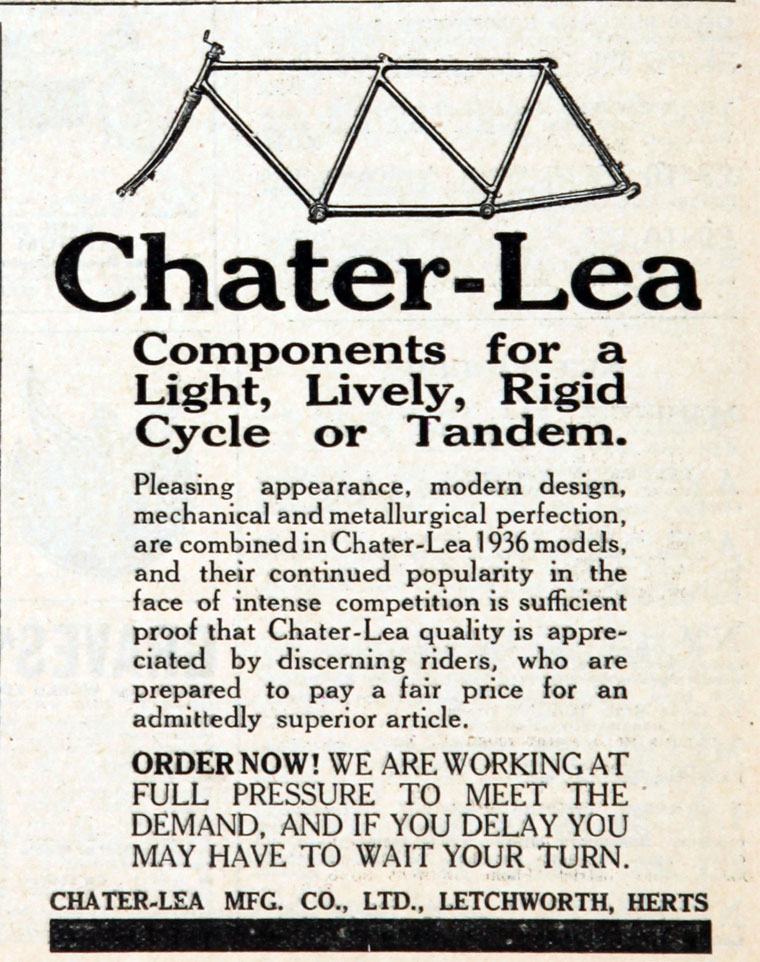 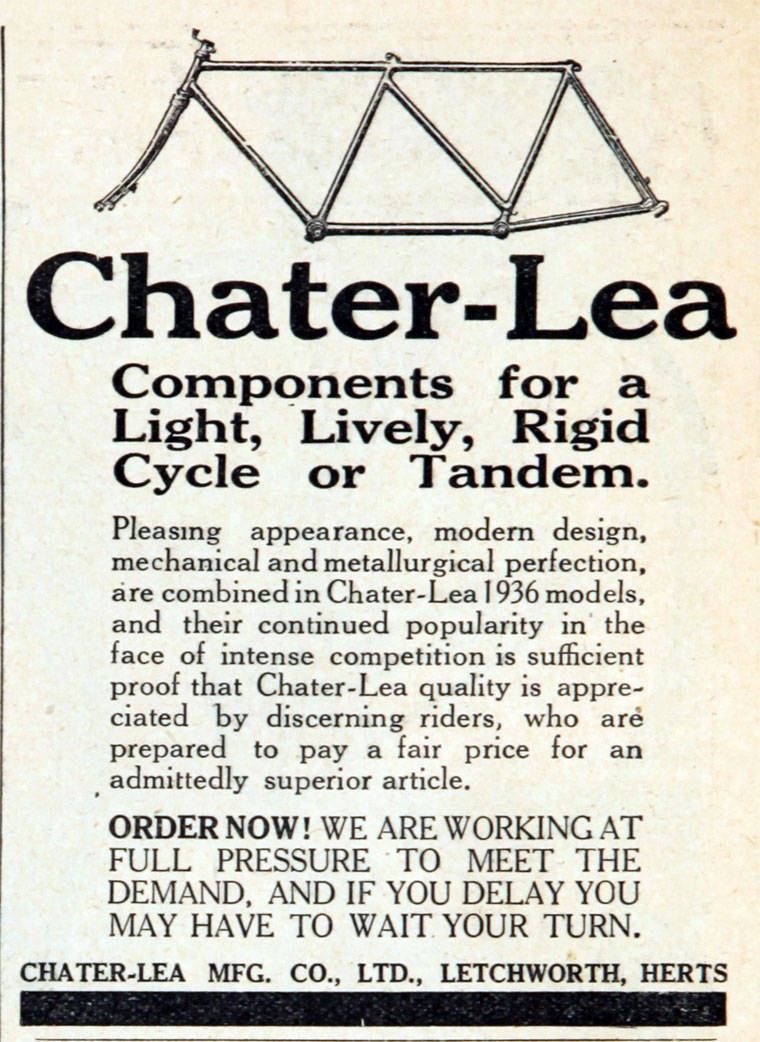 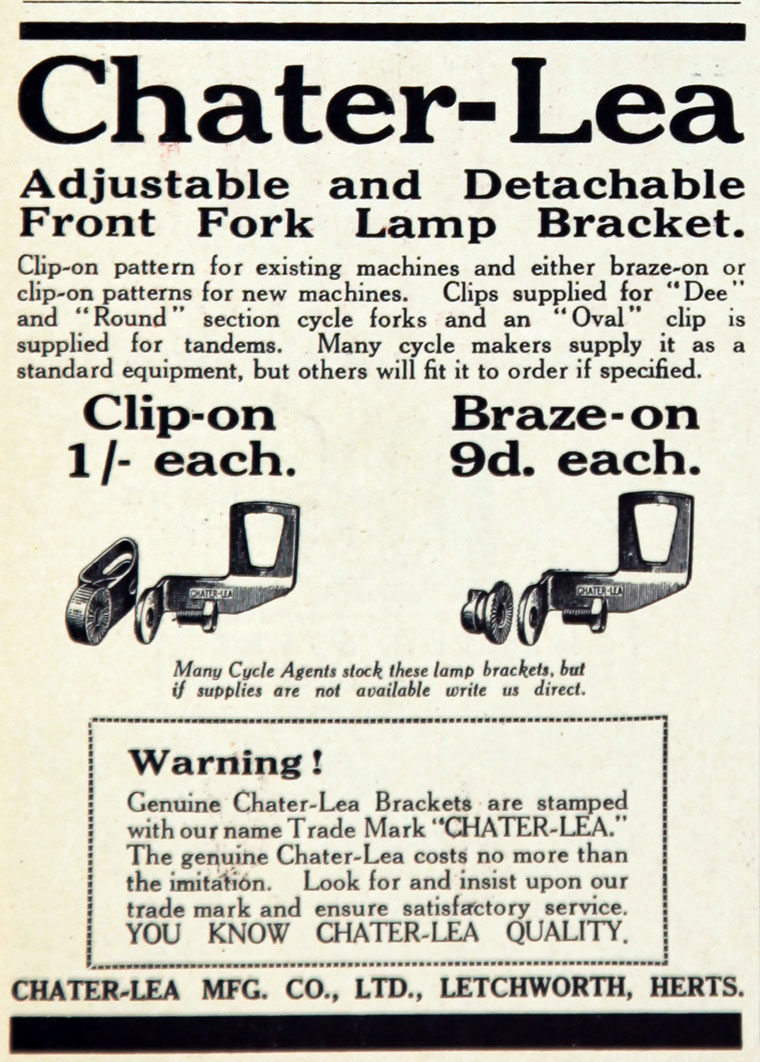 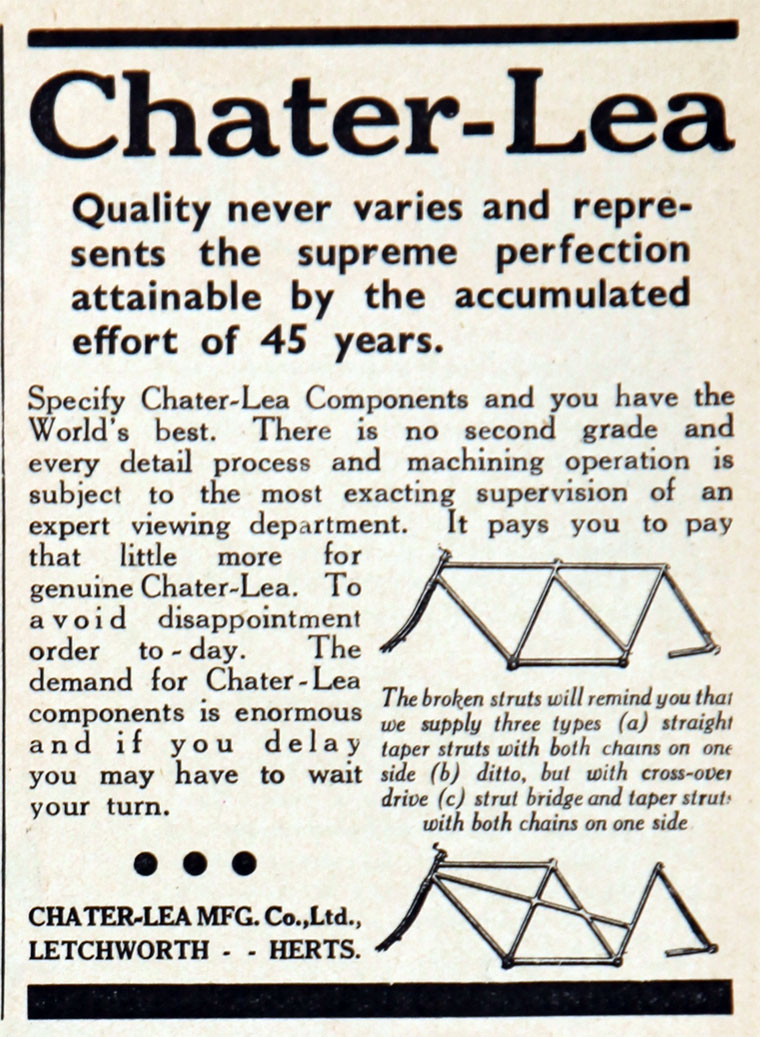 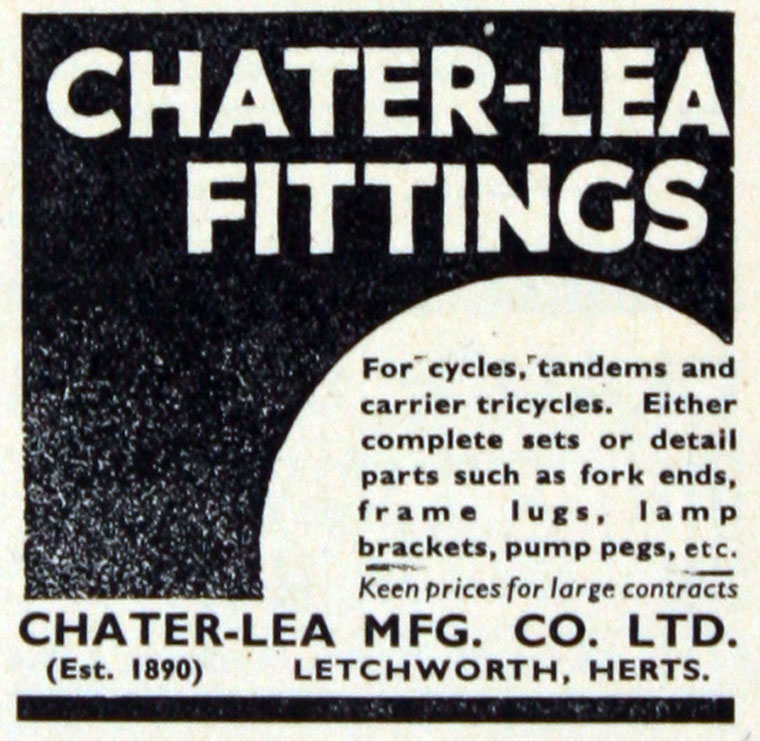 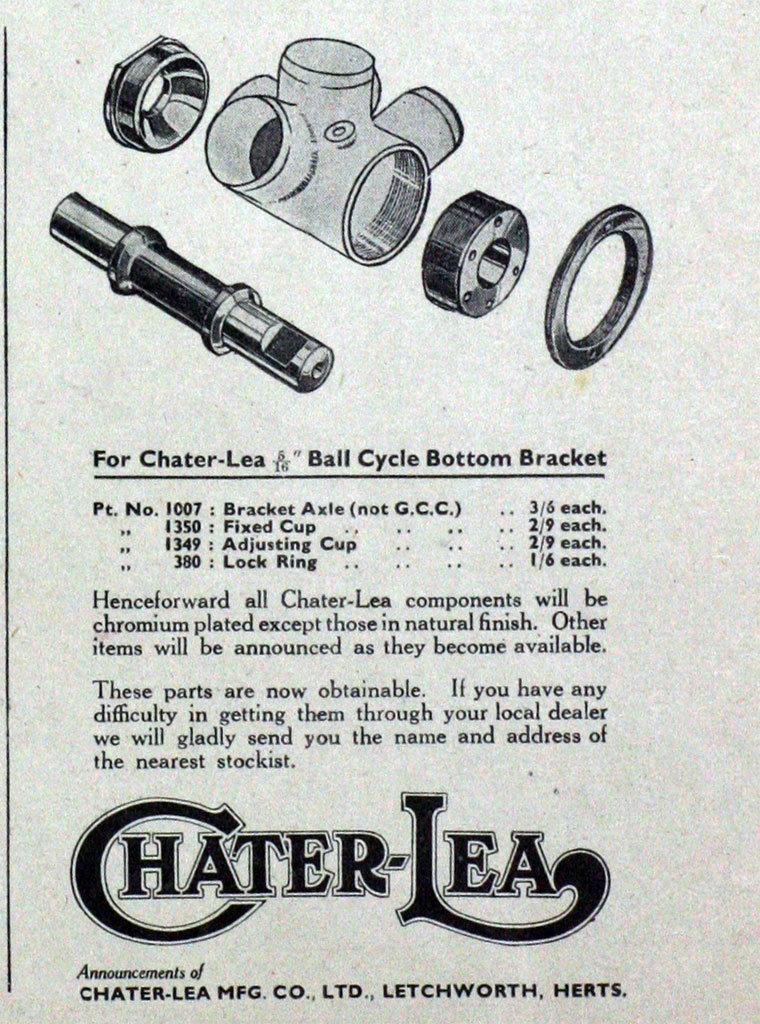 The company was founded in 1890 by William Chater-Lea who was based firstly in Colden Lane, London, and later at Banner Street. He started out as a components supplier to the trade.

Chater-Lea began in Victorian times making bicycle parts for other firms and in due course graduated to making complete motorcycles using a wide range of proprietary engines.

The range including the 545cc side-valve which had started life as a ‘sports model’. This machine had found favour with the AA as a good strong reliable sidecar unit for patrol work and over the years a total of 1200 combinations were supplied, the last one in July 1936. Motorcycle production ceased but the firm remained in existence carrying out sub-contract work for the motor industry.

1900 The first motorcycles appeared. They were built to order using whatever engine the customer specified. After a few years they had only one model, robust in construction, that was meant for sidecar use. It had a 6hp JAP engine, a two-speed gearbox, all-chain drive and leading-link front forks. They then produced a 2.5hp solo with a JAP engine and belt drive.

1909 By now they were using a three-speed gearbox and crankshaft-mounted clutch on the sidecar outfit. Then an alternative V-twin appeared, plus various solos.

1913-1916 They reverted to one model for a while - an 8hp twin sidecar. They then added a 369cc two-stroke with two-speed gearbox and belt final-drive.

1920 After the Great War, the company returned to the market with only the two-stroke.

1923 More models were added that year.

1924 Their own model was enlarged to 545cc and they produced other models with sv and ohv Blackburne engines. It was the last year for the big V-twin. They started fitting saddle tanks to their models. They made a name at Brooklands when records were broken by Dougal Marchant riding a machine with a modified Blackburne engine. It helped sales, but the machines were expensive.

1925 Only three singles were listed.

1926 They unveiled a new 348cc ohc model of the face-cam type, with vertical shaft drive. There were also two sports models with either Blackburne or JAP engines. At 100mph it was the world's fastest 350cc machine. Marchant set a World Record Flying Kilometre for 350cc and 500cc motorcycles at 102.9mph for the firm, though the engine was his special and not the later face-cam Chater-Lea engine

1927 The only models produced that year used their own Chater-Lea 348cc and 545cc engines. The name changed to Chater Lea Ltd. when the founder died in 1927. The business was then taken over by sons, John and Bernard.

They exhibited at the 1927 Motor Cycle and Cycle Show at Olympia stand No.237

1928 The company moved to Letchworth Garden City in Hertfordshire.

1929 They added a 247cc lightweight with a Villiers engine, and a Dirt Track model.

1930 Only three road models were in production and the two-stroke was dropped.

1931 Their style now had a somewhat 'vintage' look and the only machines built were the camshaft and sv models.

1936 The sv model ended and the firm returned to general engineering.

The first car was the Carette of 1907, a two-seater with a 6hp air cooled V-twin engine with chain drive to one of the rear wheels. It was still advertised in 1908 but few seem to have been made.

A more serious entry into the car market was made in 1913, with an 8hp 1094cc, water cooled four-cylinder model with shaft drive. The engine was of their own manufacture. Some may have had the earlier V-twin engine fitted. After the First World War, in 1921, it was re-released as a 10hp with a 1,315cc engine and three-speed gearbox. The two-seater version cost £350 later falling to £300. A few hundred were produced with the last ones made in 1922.

There was a proposal to take over manufacture by E. Gillyard of Bakerend Road, Bradford, Yorkshire, but this did not come about although a prototype might have been made.

No. 54. A pure freak! History unknown. Weight 27 lbs. 20 inch by 1 inch wheels fitted with Dunlop wired-on "Autowheel" tyres. Presented by the widow of the late Mr. P. M. Browne, of Messrs. Chater Lea, Ltd. The identity of maker and designer is not available to posterity; he deserves this obscurity! [1]

No. 58. (No image) 'Donkey-back' tandem: built by the Chater Lea Manufacturing Co. Ltd., London, about 1905, and used for pacing in track races. This machine had a very limited vogue, as, although it provided the follower with more shelter than the usual form of tandem, it was slower, and was of little use for purposes other than pacing. Presented by F. H. Scott, of Ealing.