Aqueduct in foreground and Chirk Viaduct behind 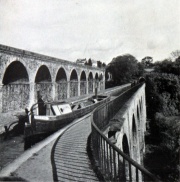 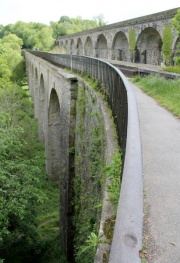 Chirk Aqueduct is a 70-foot high and 710-foot long navigable aqueduct that carries what is now the Llangollen Canal across the Ceiriog Valley near Chirk, on the England-Wales border.

The aqueduct followed Telford's innovative Longdon-on-Tern Aqueduct on the Shrewsbury Canal, and was a forerunner of the Pontcysyllte Aqueduct, also on the Llangollen Canal. Telford was a pioneer in the use of cast iron in bridges as well as aqueducts.

The aqueduct was designed by Thomas Telford and William Jessop for the Ellesmere Canal, and completed in 1801.

It now possesses a cast iron trough, effectively hidden by the masonry walls. However, as originally built, the trough only had cast iron plates for the base.

A contemporary drawing[1] of a section through the aqueduct shows some interesting features. In the upper part of the masonry are four narrow longitudinal chambers. The central wall divding the inner pair of chambers serves to support the iron floor plates of the trough to prevent bending. The plates are flanged at each end so that they can be bolted to each other. There are no flanges shown at the sides, but there are holes for vertical bolts. Now things become less clear. There are are a number of components within the structure which we will assume to be cast iron. These include three layers of what may be 'grid-irons' located near the top, bottom and mid height of the piers. These are horizontal transverse bars, notched on the upper surface, with a number of longitudinal bars locating in the notches. A short distance above the springing of the arches is a series of six bars. Further up is shown a horizontal bar, presumably a tie-bar, passing through the four voids in the arched portion, and engaging with a pair of transverse bars in the outer wall. Further up, just below the bottom of the trough, there is a thick plate on each side, outboard of which is a transverse bar. The floor plates would have been bolted to this. On top of the thick plates sit ashlar blocks which form the sides of the channel. Outboard of these, and also sitting on the plate, are walls of 'hard-burnt bricks' sealed with 'Parker's Cement'.

The arrangement offered considerable weight-saving, as well as the prospect of freedom from the problems of water leakage into the masonry which plagued other aqueducts. William Hazledine provided the iron plates.

In fact leakage proved to be a problem, and in December 1868 the Chief Engineer, John Beech, recommended the addition of cast iron side plates to form a trough. A contract was placed with Cochrane, Grove and Co, who decided that the optimum solution would be to discard the original base plates and provide an all new trough made of flanged cast iron plates bolted together. Each 'pitch' comprised a left and right hand side plate and a pair of bottom plates. Photo here. The 'modular' construction allowed the work to be completed with the minimum of downtime. Work started on 20 September 1869 and was completed on 25th.

For many years the aqueduct has served for supplying water as well as for boating use.

The Chirk Tunnel starts at the north end of the Chirk Aqueduct, allowing the canal to continue on towards Llangollen.