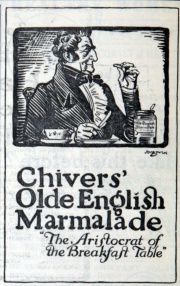 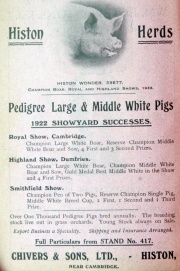 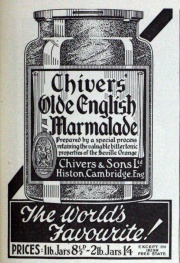 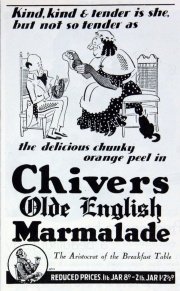 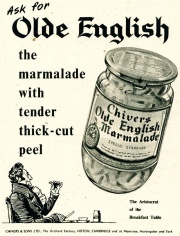 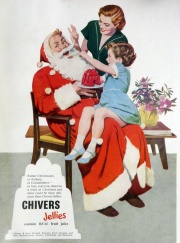 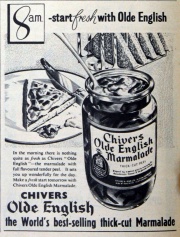 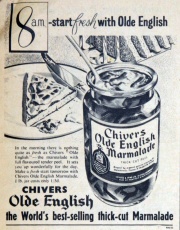 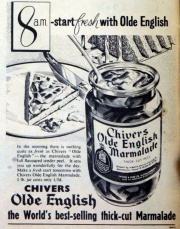 1806 The Chivers family settled as fruit farmers at Histon, in a district which has an historic association with fruit growing, for it is on record that an orchard was planted there as long ago as the seventh century, by the first Abbot of Ely. Their efforts met with success, and ultimately the time came when the quantity of fruit produced was so great that difficulty was experienced in marketing it, even though supplies were sent far afield by road and rail. The suggestion was then made of preserving the fruit on the spot where it was grown, and in 1873 the first boiling of jam took place in a small barn which still stands on the firm's estates.[1]

1873 A disused stable formed the original boiling room, and a barn constituted the warehouse. Within two years the stable and the barn proved much too small to meet the requirements of the rapidly proving trade, and land was acquired adjoining the railway station at Histon upon which a block of buildings was erected. In 1880 the buildings had been more than, doubled in size; and still further advance took place in 1894.[2]

1887 'A gold medal has been awarded to Messrs. S. Chivers and Sons for their whole fruit jams and improved home-made marmalade at the Royal Yorkshire Jubilee Exhibition, Saltaire, 1887.'[3]

1891 Partnership dissolved. '...the Partnership lately subsisting between us at Histon, in the county of Cambridge, in the trade or business of Jam Manufacturers and Wholesale Confectioners, was this day dissolved by mutual consent. As witness our hands this. 17th day of November, 1891. Stephen Chivers, Senior; William Chivers; John Chivers; Stephen Chivers, Junr.’[5]

1896 Charles Tibbit Lack was appointed the resident engineer and developed the canning machinery. He went on to design jam filling, fruit sorting can making and sterilisation equipment which helped transform Chivers into one of the world’s leading manufactures of preserves.

1901 The company was registered on 14 March, to acquire the business of jam manufacturers of 'S. Chivers and Sons'. [6]

1930s Chivers and Sons owned 1,500 a. in Histon and adjoining parishes, and another 4,500 a. elsewhere in Cambridgeshire, all run from a central estate office at Histon.[8]

1939 There were over 3,000 full-time employees, with offices in East Anglia as well as additional factories in Montrose, Newry and Huntingdon, and the company owned almost 8,000 acres (32 km2) of farms.

1959 The factories and farms were sold to Schweppes.

1961 The family bought most of the farms back.

1986 Acquired by Premier Foods who built a new factory

2011 the Chivers brand was sold to the Boyne Valley Group who still make a range of preserves under the Chivers name.[13]

The Histon factory was later sold to the Hain Daniels Group, the UK arm of the Hain Celestial Group, who offer a number of British table brands such as Frank Cooper’s Marmalade, Hartley’s Jam, Roses Marmalade and Gales Honey.[14]