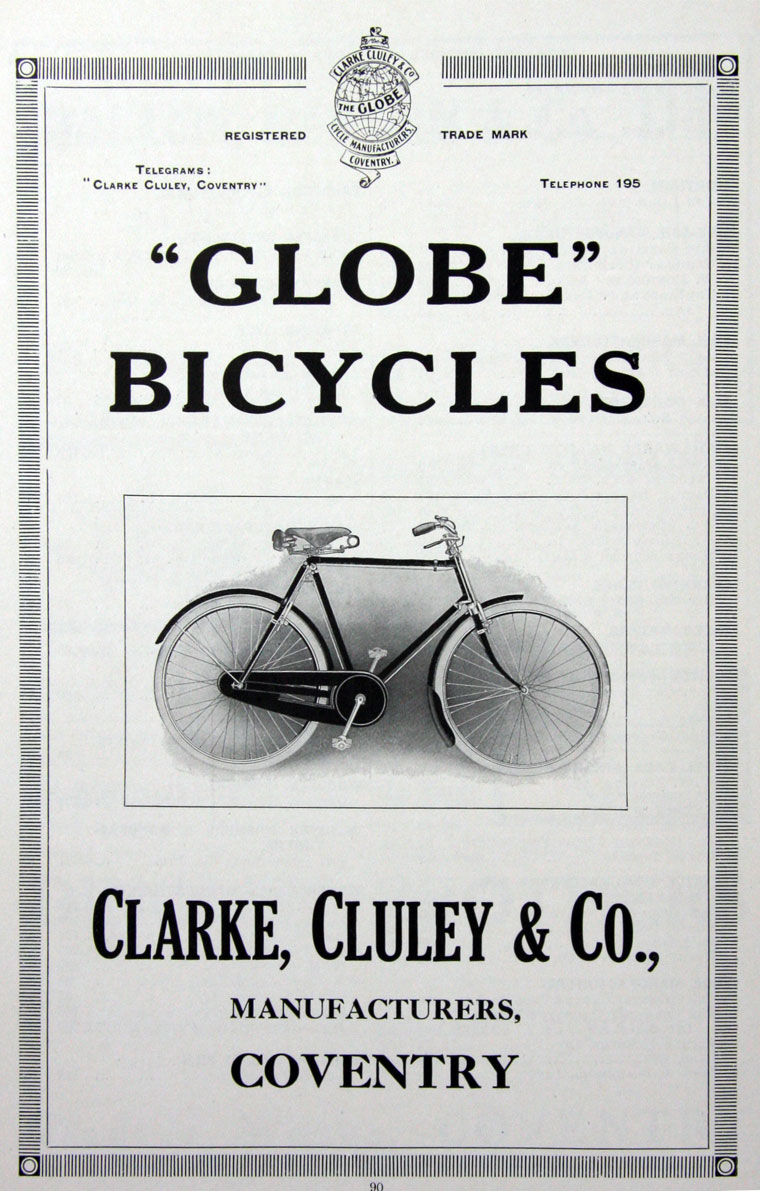 By 1901 they were producing motorcycles and forecars with Minerva, MMC and Sarolea engines

Globe were motorcycles produced from 1901 to 1905. The machines were primitive but in 1904 the firm also offered a model with the Phoenix Trimo forecar or a trailer. Although such fittings were nearing the end of their popularity, the company went ahead. The forecars had a 3.5hp Minerva or Sarolea engine with a water-cooled cylinder head inclined and hung from the downtube. A chain-driven pump circulated the water. A clutch was fitted to the crankshaft and the rear-wheel drive was by belt.

1902 'Clarke, Cluley and Co have on exhibit their 'Globe' motor cycle, in which the 2.25 h.p. motor is set vertically in the specially designed loop frame strongly held by three brackets and provided with a special silencer carried beneath the crank chamber'[1]

1904 Partnership dissolved. '...the Partnership heretofore subsisting between the undersigned, Ernest Clarke. Charles James Cluley, and Daniel Blakemore, carrying on business as Cycle Manufacturers, at the Globe Cycle Works, Well-street, Coventry, under the style or firm of "CLARKE, CLULEY, AND CO.," has been dissolved by mutual consent...'[2]

1906 Partnership dissolved. '...Partnership heretofore subsisting between us the undersigned, Daniel Blakemore and Charles James Cluley, carrying on business as Cycle Manufacturers, at the "Globe Cycle Works," Well-street, Coventry, under the style or firm of "CLARKE CLULEY AND CO.," has been dissolved by mutual consent...'[3]

1912 Listed in Spennell's directory of Coventry as Cycle Manufacturers. [4]