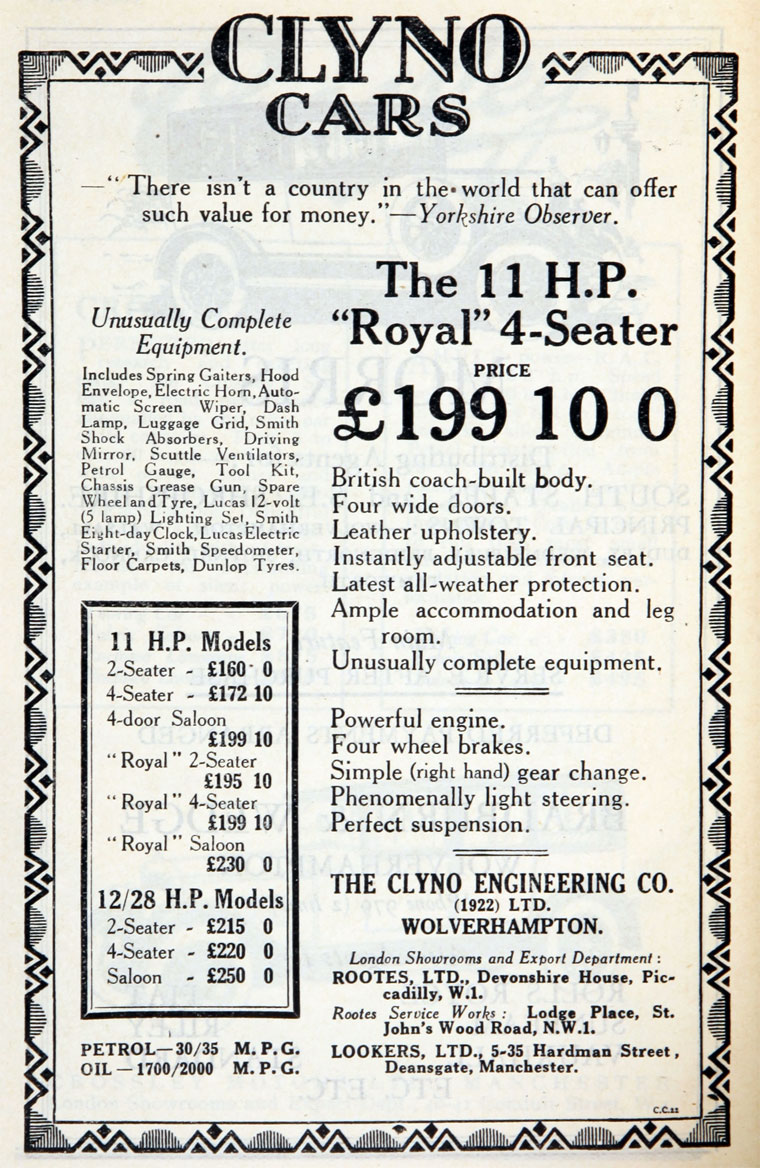 The company was a producer of motorcycles and cars in Wolverhampton, from around 1912.

The company was formed by cousins Ailwyn Percy Smith and Francis William Agutter Smith and based at Thrapston, Northamptonshire, before moving to Wolverhampton.

The name allegedly came from the slogan "Car Like You've Never Owned" but in reality is a nickname for "clined." Their early motorcycles used an innovated two-speed pulley for the belt drive, which they called inclined, hence "clined." The pulleys had been made by the Smith brothers in 1909 by the Clyno Engineering Company based in Thrapston, Northamptonshire, and in 1910 complete motorcycles were starting to be made using Stevens engines. Stevens went into voluntary liquidation in late 1910, and the Smith brothers agreed to buy their factory in Pelham Street, Wolverhampton.

In 1912, they expanded into the factory that had been used to build Humber bicycles. The First World War brought many orders for a combination machine with Vickers machine gun. With the growth in car sales motorcycle production ceased in 1923.

1917 Partnership change. '...the Partnership heretofore subsisting between us, the undersigned, Ailwyn Percy Smith and Francis William Agutter Smith, carrying on business as Engineers and Motor Cycle Manufacturers, at Pelham-street, Wolverhampton, in the county of Stafford, under the style or firm of the CLYNO ENGINEERING COMPANY, has been dissolved by mutual consent as and from the 30th day of September, 1916. All debts due to and owing by the said late firm will be received and paid by the said Francis William Agutter Smith, who will continue to carry on the said business under the same name as heretofore...'[1]

1922 Introduced light cars starting with one designed by A. G. Booth

1922 Developing from a motorcycle manufacturer, the Clyno Engineering Company (1922) Ltd became the surprise success of British car manufacturing in the 1920s, becoming the country's third largest car manufacturer. Based in Pelham Street, Wolverhampton they made in excess of 40,000 cars between 1922 and 1929.

1927 A new factory on a four acre site in Bushbury, on the northern outskirts of Wolverhampton, was added and with it two new models. The 12/35 had the engine bored out to 69.5 mm to increase the capacity to 1593cc, presumably to cater for heavier coachwork, although most of these chassis seem to have carried fabric bodies.

1929 August. All company assets purchased by Alfred Herbert. A month later they sell it on to R. H. Collier and Co.

In an apparent attempt to move up market a prototype straight 8 was made, but never went into production.