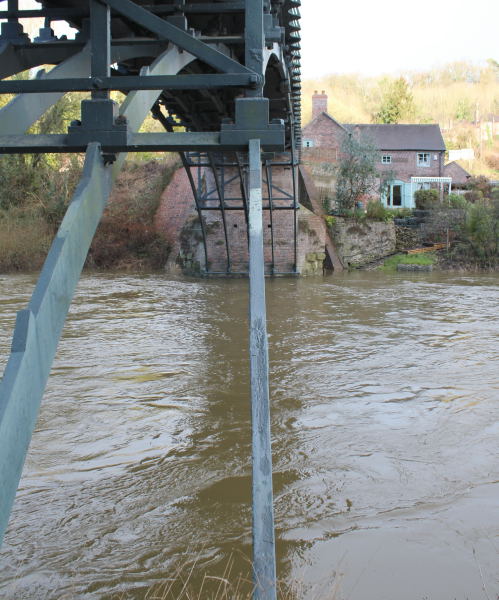 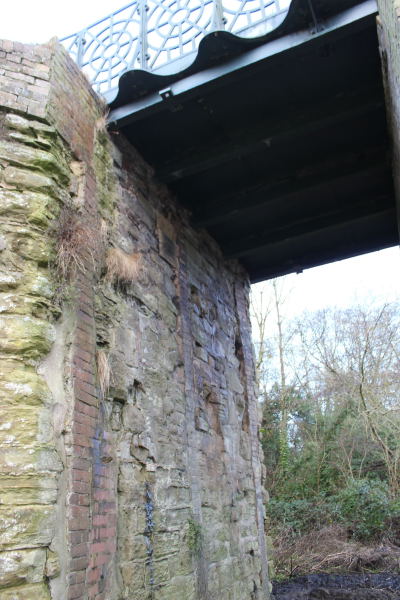 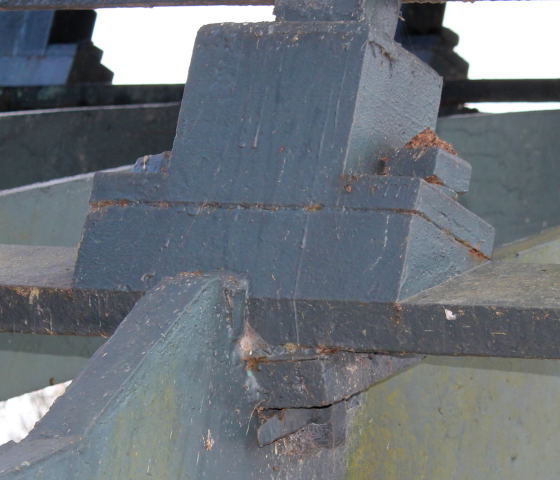 Also known as Preens Eddy Bridge. Located on the B4373 between Coalport and Broseley.

A remarkable and little-appreciated cast iron bridge, built in 1818, incorporating ribs and abutments from its predecessor, built in 1799.

Unlike its more famous neighbour (2 miles upstream at Ironbridge), this bridge still carries vehicular traffic, albeit limited to 2 tons.

As built in 1799, it had three arched ribs and a wooden deck. One of the iron ribs fractured, and the bridge was subsequently rebuilt with a wider roadway by John Onions in 1818, having five arched ribs instead of three, although three of these are almost certainly from the old bridge.

More information may be found in an I.C.E. report for the bridge[1]

Sympathetic strengthening work was carried out in 2005.[2]

Close to the river is the popular Woodbridge Inn. The name, and the two-arched bridge shown on the inn sign (Photo 16) may seem incongruous, but in fact the 1799 iron-ribbed bridge replaced a twin arched wooden bridge.

For a span of 103 feet, the design represents very economical use of iron. In fact it appears to be a generally efficient and rational design, despite (or perhaps because of!) being constrained by having to use existing ribs and piers from the previous bridge. Every piece of cast iron appears to have a role, unlike the case with its neighbour at Ironbridge. A criticism might be levelled at the limited transverse and torsional stiffness of the arch ribs, but any doubts should be tempered by the knowledge that the bridge has lasted two centuries.

The deck is made up of a series of narrow cast iron plates, these having edges shaped to accommodate the brackets which support the cast iron balustrade (railings) - note the 'wavy' shape in Photos 3, 4, 9 & 10. The deck plates are seated on long cast iron beams of inverted T-section.

These deck beams are supported from the arched ribs by slender vertical cast iron columns. The columns are attached to horizontal bars which are located in buttressed slots in the arched cast iron ribs (seen in foreground in Photo 4). Each arched rib is made from two pieces, joined at mid-span.

The arched ribs show an appreciable amount of twist, which will be apparent in the RH rib in Photo 6. It seems most likely that the twist was there from the start, and not due to forces arising after construction. The basis for this assumption is that the vertical columns supporting the deck appear to be tailored (offset) to suit any offset of the ribs relative to the deck beams. See Photo 7, where the nearest column is tilted slightly, while the short one beyond has been cast with a dog-legged shape to suit the offset.

The arch is much flatter (i.e. has a greater radius) than the bridge at Ironbridge, and the slender members give a delicate appearance compared with other long-span bridges of the early 19th century. Those bridges had much more substantial and stiffer arches than the simple ribs seen here. It is clear that on their own, the Coalport ribs would lack stiffness both transversely and torsionally - in other words they might readily twist and deflect sideways. It may therefore be interesting to see how the structure is stiffened.

Twisting of the arched ribs is resisted by attaching horizontal bars at the top. These bars also serve to support the vertical columns. Referring to Photo 7 we see the horizontal bars surmounted by blocks in which the columns are embedded. Below the bars there are small lugs to which the bars are bolted. The lugs are integral parts of the rib castings. Note: not all of the bars are bolted to the lugs - some are secured by tapered cotters. See Photo 17.

Tying all the ribs together by the horizontal bars increases the transverse stiffness of the structure, and further stiffness is obtained by bracing the columns together and by fixing the columns to the deck beams. These beams aren't particularly stiff in their own right, but some additional stiffness is conferred by the transverse deck plates. It is not clear how much they contribute, as only a small proportion appear to be bolted to the deck beams. The deck plates themselves are probably 'dished', with shallow flanges on all the edges. The plates could thereby be bolted to each other. Such is the case at Ironbridge.

There are several cast iron repair plates bolted to the ribs. See the LH rib in Photo 4 and the middle rib in Photo 5.

The three centre ribs have unused buttressed upstands ('saw teeth') on the top surface - see Photo 4, foreground. It may be that these are the original (1799) ribs. In fact this is an over-simplification, as the middle rib on the northern side appears not to have any 'saw teeth'. Thus five of the six individual central rib castings have these teeth, while one does not. This may be consistent with the fact that one of the original half ribs is known to have fractured, and the 'toothless' one may be an 1818 replacement. Ironically, this one has needed repair with two pairs of large fishplates.

The ribs on the northern side of the River Severn are sprung from a horizontal iron plate on masonry footings (Photo 5). A brick pier is built above the plate, and it may be that the masonry belonged to the original wooden bridge.

However, on the southern side, we do not see the feet on the ribs: the lower ends of the ribs are embedded in a brick structure which extends out from the brick pier to the river. The reason for the difference is not known. Photo 11 shows where the ribs enter this brick plinth. Note the cast iron kerb. A surprising feature is the presence of what appear to be grooves in the ribs' corners, typical of damage caused by the ropes of towed vessels.

Springing out from the south pier are nine diagonal struts to provide additional support for the deck beams (Photos 8 and 9). Five of these struts are clearly old, while four are modern additions. In fact the five are probably original, as the top ends appear to be bolted to lugs cast as part of the deck beams. There have evidently been changes at the bottom end, noting the concrete plinth.

Photo 10 shows the masonry pier which is 'inland' of the southern brick pier. Note that three vertical slots have been filled with brickwork. Perhaps these were associated with the original wooden bridge. Note, too, the redundant lugs on the underside of the deck support beam.

Photo 13: It is assumed that the arch ribs are cast in two halves, meeting at the crown. It is further assumed that the halves are clamped together by a saddle clamp having eight bolts. The central clamp is now bridged by a steel fabrication, which extends outwards from the centre and terminates under two smaller clamps, this modification presumably being introduced as part of the 2005 strengthening work, the plate being bonded to the cast iron ribs.