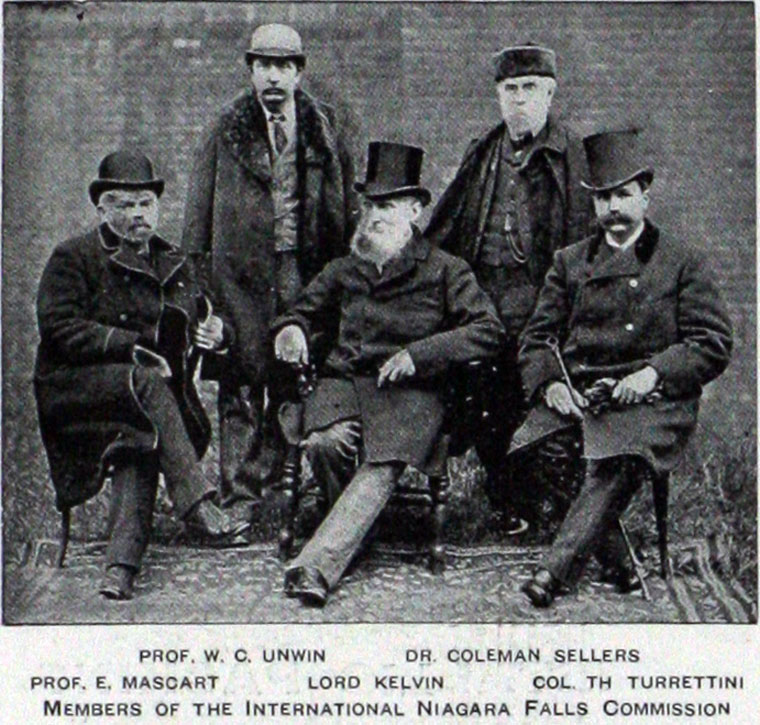 COLEMAN SELLERS died at Philadelphia on the 28th December, 1907, in his eighty-first year. His career presented many points of resemblance to that of his equally distinguished kinsman, William Sellers, who died at the same age in the same city 2 years previously, and with whom Coleman Sellers was associated in business for 30 years of his life. Both were endowed with mechanical genius and inventive ability of a high order, and together or independently they made many valuable contributions to engineering science, whilst each preserved throughout a broad mental outlook and a keen and active interest in other branches of knowledge.

Coleman Sellers was born at Philadelphia on the 28th January, 1827, and was educated at private schools in that city and at Bolmar’s Academy, West Chester, PR. At the age of nineteen he entered his brothers’ rolling-mill at Cincinnati, and remained there 3 years, afterwards becoming foreman in the locomotive works of Messrs. Niles and Co in the same city.

In 1856 he joined the staff of Messrs. William Sellers and Company, of Philadelphia, and after superintending their drawing-office for some years, he became Chief Engineer of the well-known machine-tool works, and in 1873 was taken into partnership. His connection with the firm extended over 30 years, his resignation in 1886 being due to ill health; but he continued to practise his profession as a consulting engineer up to the date of his death.

During his connection with the Sellers establishment he designed a great variety of machinery, and introduced many notable improvements into mechanical engineering practice, all his work being characterized by extreme simplicity of design and elegance of form. Probably one of his best-known early inventions was the double-cone coupling for shafts, but a number of other patents, covering a wide range of subjects, bear witness to his versatility and ingenuity as an inventor.

His name and reputation as an engineer, however, will probably be chiefly identified by future generations with the inception and development of the scheme for the utilization of the energy of Niagara Falls. He first reported on the practicability of the enterprise in 1889, and was then made Consulting Engineer to the Cataract Construction Company, formed to carry out the work of harnessing the Falls.

Subsequently he assisted in the establishment in London in 1890 of the International Niqara Commission, of which he was appointed a member, Lord Kelvin being Chairman and the other members being Colonel Turrettini, Professor E. Mascart, and Dr. W. C. Unwin. The engineers charged with the execution of the plans were formed into a board, of which Dr. Sellers was appointed chairman. The Board of Engineers was subsequently abolished, and Dr. Sellers became Chief Engineer of the Cataract Construction Company, and of its successor, the Niagara Falls Power Company. During the organization of the latter company he served also for a time as its President.

Much of the preliminary work of design devolved upon Dr. Sellers, and the ultimate success of the enterprise owes not a little to his foresight and unfailing resource. His connection with the undertaking continued up to about 2 years before his death, a period of nearly 16 years.

Ever ready to impart his knowledge to others, Dr. Sellers’ contributions to engineering science in the form of Papers, lectures, etc., were as numerous as they are valuable and diverse. Like his cousin, William Sellers, he took an active and prominent part in the work of the Franklin Institute of Philadelphia, of which he was president for five successive terms, besides accomplishing much useful work on many committees of that institution and serving on the board of managers until his death. He was also a Past- President of the American Society of Mechanical Engineers, and a Member of, amongst other bodies, the American Society of Civil Engineers, the American Society of Naval Engineers and Architects, the American Philosophical Society, the Pennsylvania Historical Society, and the Institution of Mechanical Engineers.

For many years he lectured on engineering practice at the Stevens Institute of Technology, New Jersey, and in 1887 he received the honorary degree of Doctor of Engineering from that institution. The University of Pennsylvania conferred upon him in 1809 the honorary degree of Doctor of Science. He was decorated hy King Oscar of Sweden and Norway with the Order of St. Olaf, in recognition of his scientific attainments and services.

His leisure was devoted largely to the pursuit and investigation of many scientific subjects to which his keen and versatile intellect was attracted, and with no less brilliant results than ensued from his professional activity. In photography especially he excelled, and was the author of various ingenious devices in connection with the art, some of which anticipated later developments. His mental faculties remained unimpaired to the end, and when failing eyesight deprived him of the ability to read printed type, he at once had recourse to the system of raised letters used by the blind, in which he soon acquired facility.

Dr. Sellers was elected a Member of The Institution on the 6th May, 1884.

Dr. COLEMAN SELLERS was born in Philadelphia on 28th January 1827, being the son of Coleman Sellers, an engineer and manufacturer of machinery. His family came originally from Belper, Derbyshire, in 1682, and his progenitors in each generation preceding him were active in public life and in the industrial development of Pennsylvania, and in scientific pursuits. He was educated in private schools, where at an early age he evinced a keen interest in natural philosophy, and his holidays were largely devoted to making electrical and other apparatus described in textbooks and in the lecture room.

The loss of his father in early childhood and the discontinuance of the business deprived him of opportunities at the outset of his career. Soon after leaving school in his seventeenth year be joined his elder brothers at Cincinnati, and with a short experience at railway surveying in Kentucky he began his technical education as draughtsman in preparing designs of rolling-mill machinery.

Shortly following this he had employment in the Globe Rolling Mills where he attained the position of foreman. Subsequently he was engaged with his brother, George E. Sellers, in building a special bill-climbing locomotive of the latter's invention for the Panama Railroad.

At twenty-three years of age he was employed as general foreman of the locomotive works of Niles and Co., of Cincinnati. He held this position for five years, until in 1856 he was engaged by William Sellers and Co., of Philadelphia, as chief engineer of their machine-tool works, and subsequently was admitted to partnership.

Among his earliest inventions was the cone vise coupling which changed the whole system of shafting for transmission of power, by replacing the old-plate couplings which necessitated the use of open-side or hook-bangers. Another of his early improvements was his friction- feed discs for lathes by which immediate and infinite graduation of feeds are obtainable without change of gears, a feature since applied to other machines. During his connection with the Sellers' works some thirty patents wore issued to him, besides his part in the many improvements of the firm developed under his supervision.

Following the habit formed in youth, his leisure hours were largely devoted to scientific pursuits, embracing experiments in electricity, photography, and microscopy, in which he found usually some practical application to his engineering work. His interest in photography grow out of his desire to utilize it to illustrate matter relating to machine tools, and incidentally he invented the " Kinetoscope " to show motion pictures, the direct parent of the modern apparatus since perfected through the aid of instantaneous photography. In this connection he is credited also as the first to suggest the use of absorbent cotton for surgical purposes, the outcome of his experiments with gun-cotton in photography where he first noted the characteristics of the material.

In 1885 he retired from active interest in the Sellers' works owing to serious illness, and devoted several years to recuperation, chiefly in England and Scotland. As his health improved he was able to respond to demands upon him for professional advice and eventually to establish a general practice as a consulting engineer.

In 1889 he was retained to consider and report upon the proposed utilization of the water-power of Niagara Falls, and in 1890 was the American representative on the International Niagara Commission composed of five engineers with the late Lord Kelvin as Chairman.

He was also consulting engineer of the Cataract Construction Company organised to carry out the development, and Chairman of its Board of Engineers. When it was deemed expedient to abolish that Board, Dr. Sellers was made chief engineer and president of the Niagara Falls Power Company for which the work was being executed, in order that he might exercise the powers of approval as well as the supervision of all plans. He continued his active connection with the Niagara work until its completion placed it upon an operative basis.

Dr. Sellers was recognised as the leading opponent of legislation to enforce the use of the metric system in the United States, and his contributions to the literature of the subject are exhaustive. He wrote freely on engineering subjects for the technical journals, and his occasional lectures before the Franklin Institute and other societies embraced a variety of subjects. He rendered valuable service in formulations and enactment of uniform laws governing municipal inspection of steam boilers, and freely gave his services when called upon to serve the community in matters of public interest involving engineering experience.

In 1877 the King of Sweden and Norway admitted him to the Order of St. Olaf in recognition of his services to science and industry. He also received the honorary degrees of Doctor of Science from the University of Pennsylvania, and of Doctor of Engineering from the Stevens Institute of Technology.

His death occurred at his residence in Philadelphia on the 28th December 1907, in his eighty-first year.