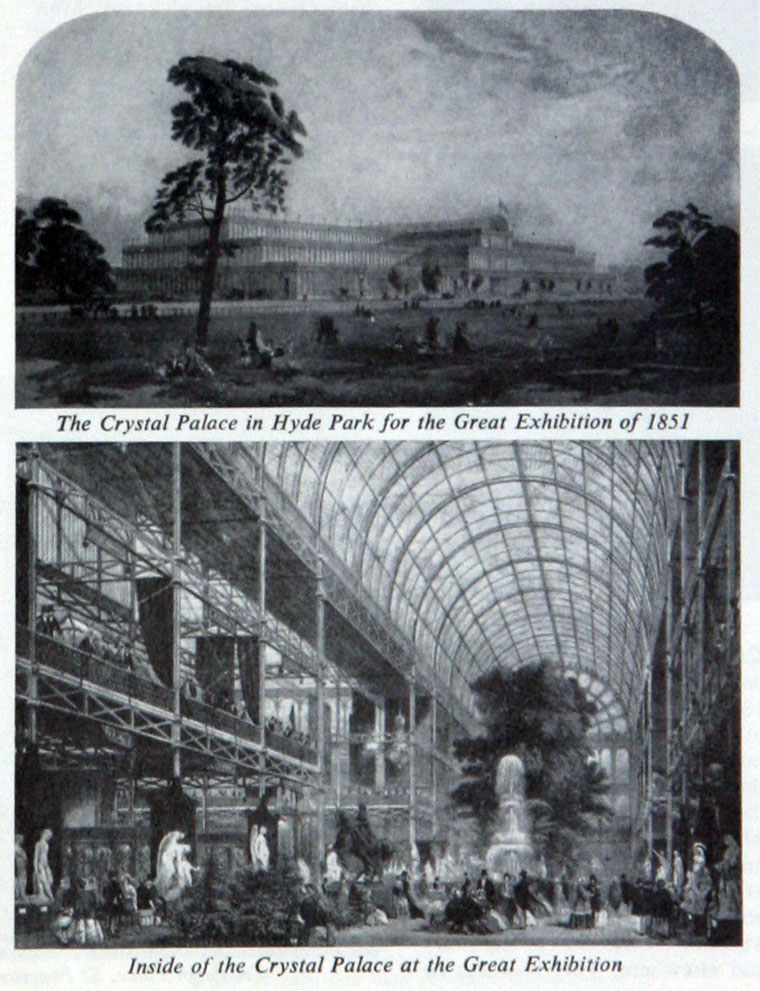 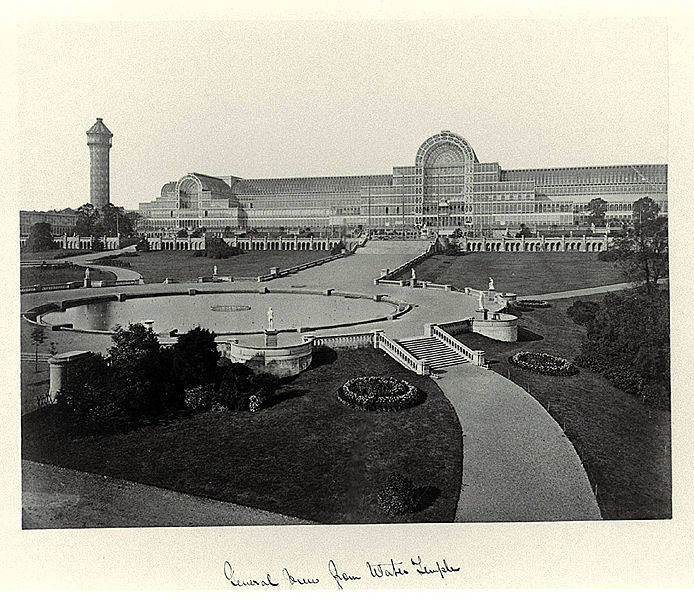 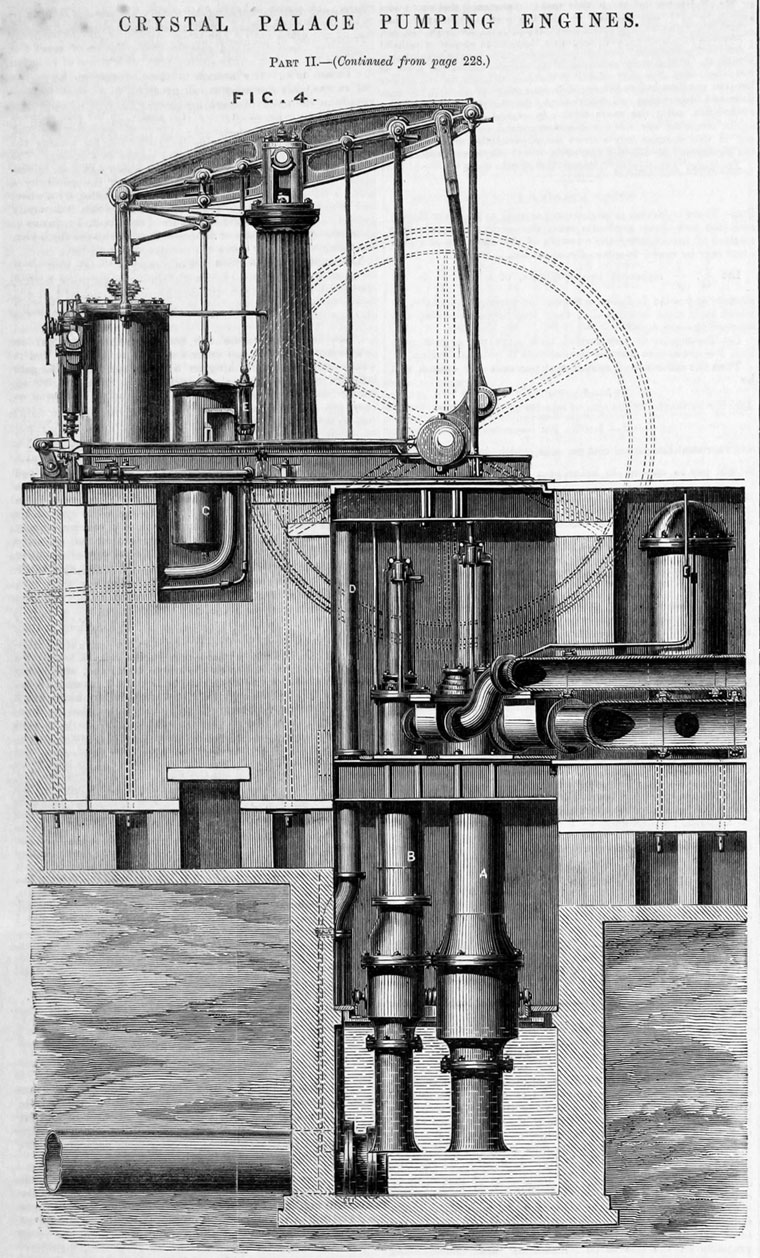 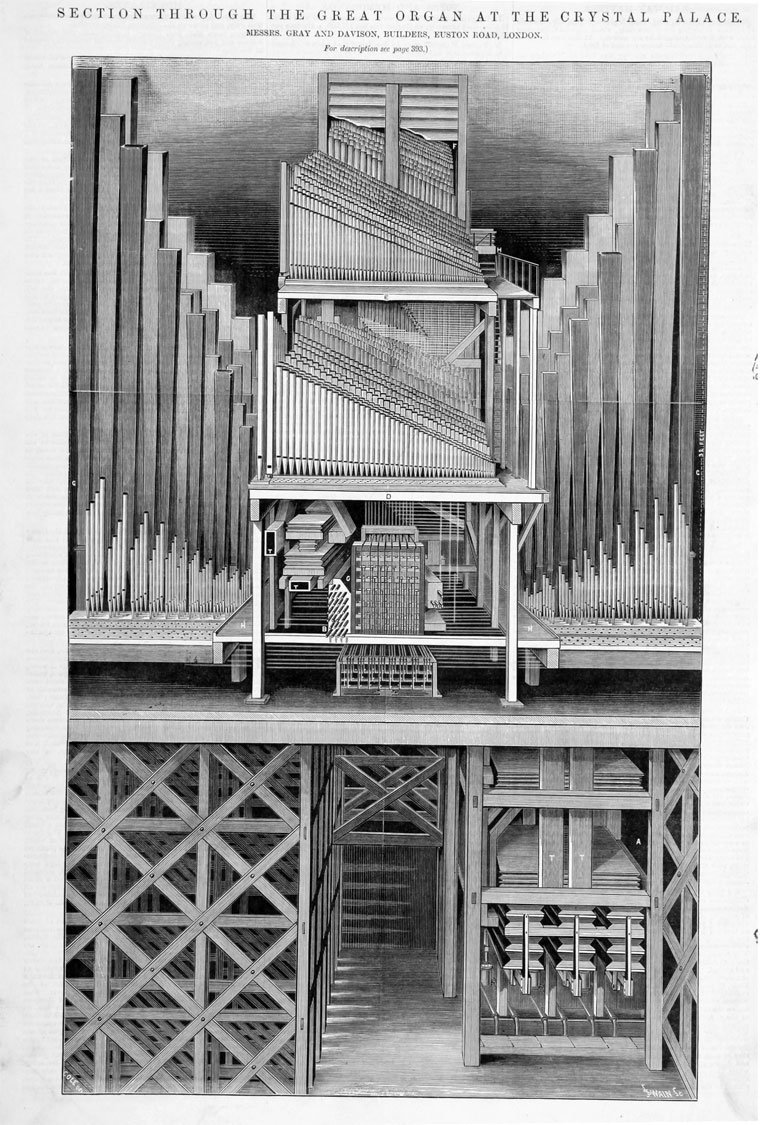 1882. Section through the Great Organ by Gray and Davison.

The Crystal Palace was a cast-iron and glass building originally erected in Hyde Park, London, England, to house the Great Exhibition of 1851.

More than 14,000 exhibitors from around the world gathered in the Palace's 990,000 square feet of exhibition space to display examples of the latest technology developed in the Industrial Revolution.

After the exhibition, the building was moved to a new park in Sydenham Hill, London.

The Crystal Palace was enlarged and stood in the area from 1854 to 1936, when it was destroyed by fire. It attracted many thousands of visitors from all levels of society. The name Crystal Palace (the satirical magazine Punch usually gets the credit for coining the phrase) was later used to denote this area of south London and the park that surrounds the site, home of the Crystal Palace National Sports Centre.

Designed by Joseph Paxton, the Great Exhibition building was 1,851 feet long, with an interior height of 128 feet.

The Crystal Palace's creator, Joseph Paxton, was knighted in recognition of his work. Paxton had been the head gardener at Chatsworth House. There he had experimented with glass and iron in the creation of large greenhouses, and had seen something of their strength and durability, knowledge that he applied to the plans for the Great Exhibition building. Planners had been looking for strength, durability, simplicity of construction and speed—and this they got from Paxton's ideas. The project was engineered by William Cubitt.

Full-size, living elm trees in the park were enclosed within the central exhibition hall near the 27-foot tall Crystal Fountain. Sparrows became a nuisance; Queen Victoria mentioned this problem to the Duke of Wellington, who offered the famous solution, "Sparrowhawks, Ma'am".

The ironwork contractors were Fox, Henderson and Co. The 900,000 square feet of glass were provided by the Chance Brothers glassworks in Smethwick, Birmingham. They were the only glassworks capable of fulfilling such a large order and had to bring in labour from France to meet it in time. The final dimensions were 1,848 feet long by 456 feet wide. The building was 135 feet high, with 772,784 square feet on the ground floor alone.

The Crystal Palace had the first major installation of public toilets, the Retiring Rooms, in which sanitary engineer George Jennings installed his "Monkey Closet" flushing lavatory. (Initially just for men, but later catering to women.) During the exhibition, 827,280 visitors paid one penny each to use them.

The life of the Great Exhibition was limited to six months, after which, something had to be done with the building. Under the direction of the Crystal Palace Co, and against the wishes of Parliamentary opponents, the building was re-erected on a property named Penge Place that had been excised from Penge Common atop Sydenham Hill.

The building constructed from 1854 on Sydenham Hill, while incorporating most of the constructional parts of the Hyde Park building, was so completely different in form as to be properly considered a quite different structure - a 'Beaux-arts' form in glass and metal. It was modified and enlarged so much that it extended beyond the boundary of Penge Place, which was also the boundary between Surrey and Kent.

Within two years, Queen Victoria again performed an opening ceremony. The new site hosted concerts, exhibits, and public entertainment. The reconstruction was recorded for posterity by Philip Henry Delamotte, and his photographs widely disseminated in his published works.

Two railway stations were opened to serve the permanent exhibition: Crystal Palace High Level (an impressive building by Edward Barry), from which a subway under the Parade led directly to the entrance, and Crystal Palace Low Level station off Anerley Road.

Joseph Paxton was first and foremost a gardener, and his layout of gardens, fountains, terraces and cascades left no doubt as to his ability. One thing he did have a problem with was water supply. Such was his enthusiasm that thousands of gallons of water were needed in order to feed the myriad fountains and cascades which abounded in the Crystal Palace park. The two main jets were 250 feet high.

Initially, water towers were constructed, but the weight of water in the raised tanks caused them to collapse. Isambard Kingdom Brunel was consulted and came up with the plans for two mighty water towers, one at the north and the other at the south end of the building. Each supported a tremendous load of water, which was gathered from three reservoirs, at either end of and in the middle of the park.

Two years later, the grand fountains and cascades were opened, again in the presence of the Queen, who got wet when a gust of wind swept mists of spray over the Royal carriage.

While the original palace cost £150,000, the relocation to Sydenham cost £1,300,000, burdening the company with a debt it never repaid, partly because admission fees were depressed by the inability to cater for Sunday visitors: many people worked every day except the Sabbath, when the Palace had always been closed. The Lord's Day Observance Society (as today) held that people should not be encouraged to work at the Palace or drive on Sunday, and that if people wanted to visit, then their employers should give them time off during the working week. However, the Palace was open on Sundays by May 1861, when 40,000 visitors came.

In 1871 the world's first cat show, organised by Harrison Weir, was held at The Crystal Palace.

1881 The first of a series of international exhibitions was held at Crystal Palace, on the topic of Wool

By the 1890s the Palace's popularity and state of repair had deteriorated; the appearance of stalls and booths had made it a more downmarket attraction.

Robert Baden-Powell first noticed the interest of girls in Scouting while attending a Boy Scout meeting at Crystal Palace in 1909. This observation would later lead to the formation of Girl Guide and Girl Scouts.

In 1911, the Festival of Empire was held at the building to mark the coronation of George V and Queen Mary.

In the years after the Festival of Empire the building fell into disrepair, as the huge debt and maintenance costs became unsustainable, and in 1911 bankruptcy was declared.

In 1913 the Earl of Plymouth purchased it, to save it from developers. A public subscription quickly re-purchased it for the nation.

During the First World War, it was used as a naval training establishment under the name of HMS Victory VI, informally known as HMS Crystal Palace. More than 125,000 men from the Royal Naval Division, Royal Naval Volunteer Reserve and Royal Naval Air Service were trained for war at Victory VI.

At the cessation of hostilities it was re-opened as the first Imperial War Museum, but traffic remained light.

In the 1920s, a board of trustees was set up under the guidance of manager Sir Henry Buckland. He is said to have been a firm but fair man, who had a great love for the Crystal Palace, and soon set about restoring the deteriorating building. The restoration not only brought visitors back, but also meant that the Palace started to make a small profit once more. Buckland and his staff also worked on improving the fountains and gardens, including the Thursday evening displays of fireworks by Brocks.

On 30 November 1936 the palace caught fire and was destroyed: the glow was visible across eight counties. That night, Buckland was walking his dog near the palace, with his daughter (Chrystal Buckland, named for the palace) when they noticed a red glow within. Inside, he found two of his employees fighting a small office fire, that had started in the women's cloakroom. Realising that it was a serious fire, they called the Penge fire brigade. But, even though 89 fire engines and over 400 firemen arrived they were unable to extinguish it.

The fire spread quickly in the high winds that night, because it could consume the dry old timber flooring, and the huge quantity of flammable materials in the building. Buckland said, “In a few hours we have seen the end of the Crystal Palace. Yet it will live in the memories not only of Englishmen, but the whole world”. 100,000 people came to Sydenham Hill to watch the blaze, among them Winston Churchill, who said, "This is the end of an age".

Just as in 1866, when the north transept burnt down, the building was not adequately insured to cover the cost of rebuilding (at least two million pounds).

The South Tower had been used for tests by television pioneer John Logie Baird for his mechanical television experiments, and much of his work was destroyed in the fire.

All that was left standing after the 1936 fire were the two water towers, and these were taken down during the Second World War. The reason given was that the Germans could have used them to navigate their way to London. The north one was demolished with explosives in 1941; the south tower was dismantled due to its proximity to other buildings.

With the palace's destruction, the High Level Branch station fell into disuse, and it was closed in 1944, and finally shut down in 1954.

After the war, the site was used for a number of purposes. Between 1953 and 1973 an auto racing circuit operated on the site, some supported by the Greater London Council. The noise was unpopular with nearby residents and racing hours were soon regulated under a high court judgment.

Over the years, numerous proposals for the former site of the palace have not come to fruition. Currently there are two competing plans. The London Development Agency wants to spend £ 67.5 million in the park developments, including new homes and a regional sports centre.

Recently, a private consortium announced plans to rebuild the Crystal Palace and its use to house galleries, a snow slope, a music auditorium, leisure facilities and a hotel.