Grace's Guide is the leading source of historical information on industry and manufacturing in Britain. This web publication contains 140,363 pages of information and 227,382 images on early companies, their products and the people who designed and built them. 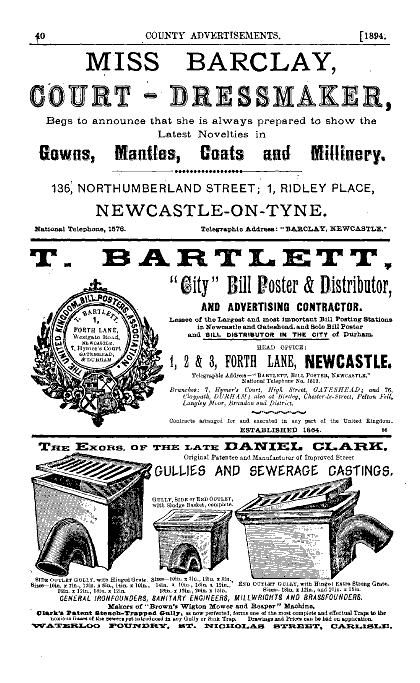 1849 Advert: 'WATERLOO FOUNDRY, CARLISLE.
DANIEL CLARK (Successor to Thomas Burgess, deceased,) begs to announce to his Friends and the Public generally that has PURCHASED the STOCK-IN-TRADE, together with the Book Debts, and entered upon the BUSINESS and Premises of the late Thomas Burgess, deceased, and Iron and Brass Founder, situate in Water Street, CARLISLE, where in future the Business will be carried on by him in all the various branches ; and having been for many years in the employment of the late Thomas Burgess, hopes, by attention to orders, which will be executed with the utmost neatness and despatch and at the lowest remunerating prices, to merit a share of public patronage and support so liberally bestowed upon his predecessor for upwards of twenty years. N.B.—All Debts due to, or owing by the late Thomas Burgess, will be received and paid him.'[1]