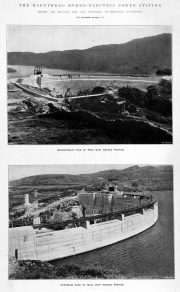 1874 Sir Charles Fox and Sons was a father and son enterprise until Sir Charles' death. His son Douglas then became senior partner and the name became Douglas Fox and Partners. At this stage Douglas' brother Francis also became a partner in the firm.

Douglas was involved with the construction of the Snowdon Mountain Railway and the extension of the Great Central Railway from Rugby to London including the terminal at Marylebone Railway Station.

He worked on several of London's early tube lines including the Great Northern and City tube, the Hampstead tube which linked Charing Cross with Golders Green and Highgate, and the unsuccessful North West London Railway project. Douglas was, with James Henry Greathead, joint engineer of the Liverpool Overhead Railway which was the first electric elevated city railway in the world.

George Andrew Hobson became a partner in the firm.

Further afield Douglas Fox was also involved with the design of much of the Cape Colony railways, the whole Rhodesia railway system, which included the 500 ft span Victoria Falls Bridge, the Benguela Railway in Angola, and several railways in South America. The firm were consulting engineers to the Central Argentine Railway; the South Indian Railway; the Southern São Paulo Railway and the Dorada Railway.

1938 the firm changed its name to Freeman Fox and Partners