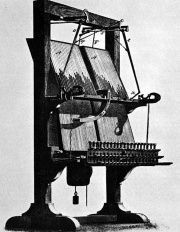 Dr. William Church (c1778-1863) of Birmingham. (Note: The 'Engineers and Mechanics Encyclopedia 1839' refers to Dr. Church with the middle initial of 'H', but no other reference has been found to a middle name)

1822 Second visit to England to construct a printing press of his own design for 'Britannia', Lancaster Street.

1824 Deed poll whereby William Church of Birmingham, esq., describes his invention of certain improvements in machinery for printing in compliance with a proviso in the Letters Patent granting him protection for the invention. MS 1094/ACC 1931-006/386925 18 August, 1824. [2]

1829 Letters Patent granting William Church of Haywood House, near Birmingham, esq., sole use and exercise for fourteen years of his invention of improvements in machines for propelling vessels and other machines capable of being propelled by steam. MS 1094/ACC 1931-006/386915 15 October, 10 Geo. IV 1829.[3]

1831 Letters Patent granting William Church of Haywood House, Bordesley Green, near Birmingham, gent., sole use and exercise for fourteen years of his invention of improvements in machinery for the transportation of goods or passengers. MS 1094/ACC 1931-006/386924 7 September, 4 Will IV 1833. [4]

1832 Locomotive steam carriage. His first patent for locomotion is dated the 9th February, 1832.

1834 November. First road trials of the steam carriage successful. Will be assisted by Mr. Harrison the 'practical engineer'.[5] [6]

1835 Built an omnibus to carry 40 passengers for the London and Birmingham Steam Carriage Co.

1835 July. '...Fiat in Bankruptcy, bearing date the 23d day of April 1835, awarded and issued forth against William Church, of Birmingham, in the County of Warwick, Civil Engineer, Dealer and Chapman,...'[9]

1838 Built a locomotive to run on the London and Birmingham Railway.

1840 September. Patent. 'William Church, of Birmingham, civil engineer, for improvements in fastenings applicable to wearing apparel, and in apparatus for making the same and like articles, and also in the method or methods of preparing the said articles for sale'.[11]

1842 Patent. 'William Church, of Birmingham, civil engineer and Jonathan Harlow, of the same place, manufacturer, for certain improvements in the mode of manufacturing metallic tubes, and in the mode of joining them, or other tubes or pieces, for various useful purposes. December 16; six months.'[14]

1848 Patent. 'William Church, civil engineer, and Thomas Lewis, woollen draper, both of Birmingham, for a certain improvement, or certain improvements in machinery to be employed in making playing and other cards, and also other articles made wholly or in part of paper or pasteboard, part or parts of which said machinery may be applied to other purposes where pressure is required. Oct. 26; six months.'[16]

1850 March. Patent. '...Dr. Church, of this town, has recently obtained a patent for a machine for cutting and printing cards ..... understand that Dr. Church in now engaged in perfecting a machine for dating, which will afford fraud on Railway Companies.'[17]

1853. Patent. '1277. To William Church, of Birmingham, in the county of Warwick, Gentleman, for the invention of "a new or improved sight,for cannons or other ordnance."'[19]

1854. Patent. '1639. To William Church, of Birmingham, in the county of Warwick, Civil Engineer, and Samuel Aspinwall Goddard, of Birmingham aforesaid, Merchant and Gun Manufacturer, for the invention of "an improvement or improvements in ordnance."'[20]

1855 Patent. 'William Church and Samuel A. Goddard for an improvement or improvements in ordnance. Dated July 26.'[21]

1856 Patent. '2074. And William Church, of Birmingham, in the county of Warwick, Engineer, has given the like notice in respect of the invention of "improvements in mounting and adjusting ordnance and other fire-arms."'[22]

1860 May. 'Another new cannon - A 12lb wrought-iron experimental gun, upon a principle varying between that of Sir William Armstrong and Dr. Church, manufactured by Mr. Morgan, was on Wednesday tested at the proof butt, Woolwich....'[25]

1861 November. Letter regarding the gun that Dr. Church and the writer (S. A. Goddard) produced five years previous.[26]

1863 October 7th. Died. 'On the 7th October last, in Vermont, U.S.A., Dr. William Church, aged 85 years: for more than forty years a resident of Birmingham, and one of the first mechanical geniuses of the age.'[27]

The late Dr. Church. Born in Vermont and educated for a medical career. 1811 Patent for a screw propeller. 1818 made a brief visit to England. Second visit in 1822 to construct a printing press of his own design for 'Britannia', Lancaster Street. 1825 invented a mode of smelting iron by hot blast and anthracite coal. 1825 onward inventing and constructing machines for making spikes, nails, button shanks, hooks and eyes, etc. Built a steam carriage under the supervision of Mr. Wakefield, Senior, now of Harford street. Built a railway engine to his own plan. Invented a railway ticket machine. 1832 proposed to lay down wires to London and to communicate by electricity. Of late years he invented and constructed with the help of Mr. Higgins of Moseley street, a breech-loading cannon. Took out about seventy patents. As soon as the mechanical difficulty was solved he tended to lose interest in a project. Twice married, the last time in Birmingham, he survived his last wife by twelve years. Five years ago his son-in-law in Vermont invited him to spend his remaining years with him and with the aid of a borough councillor and a few friends was enabled to go. The Doctor never accumulated any money.