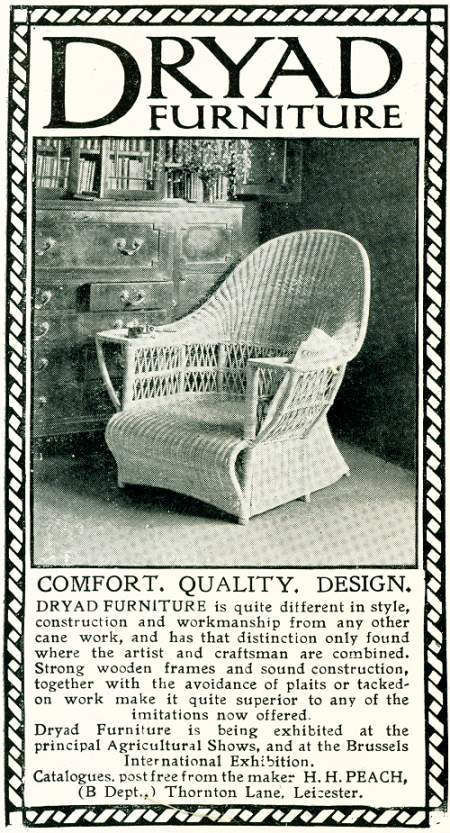 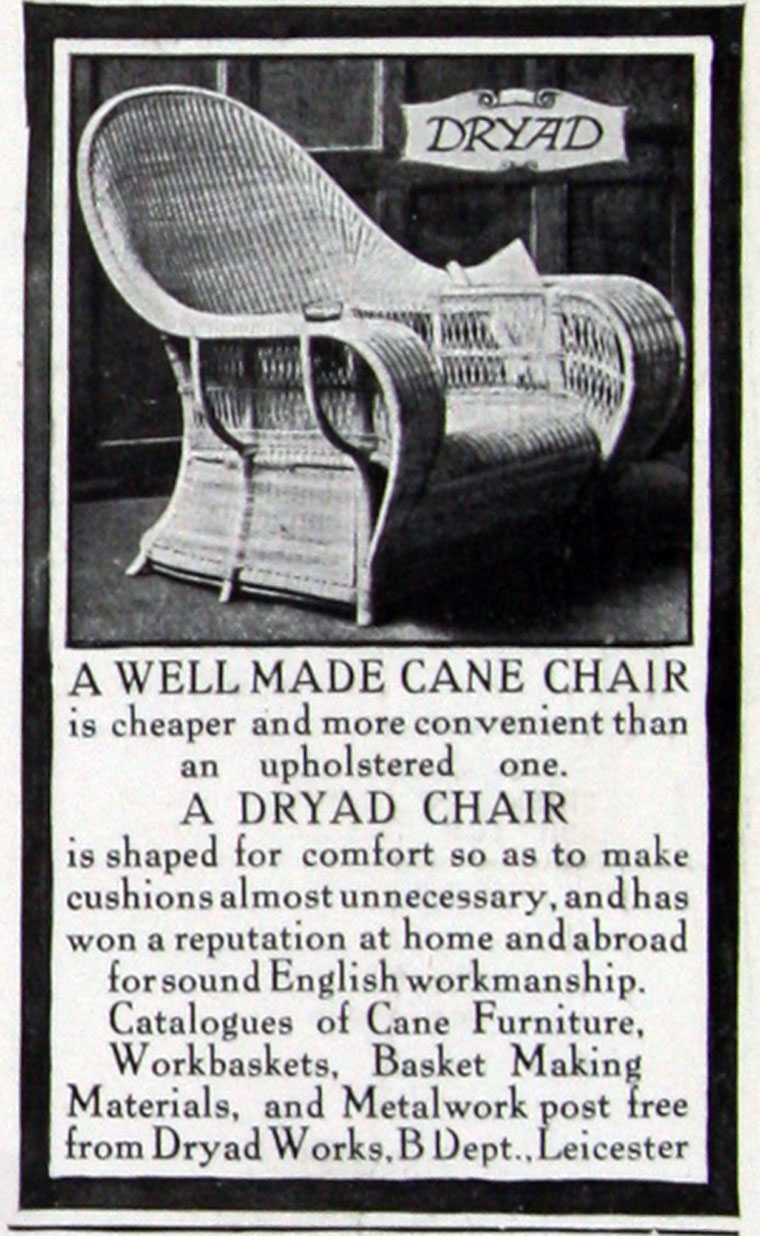 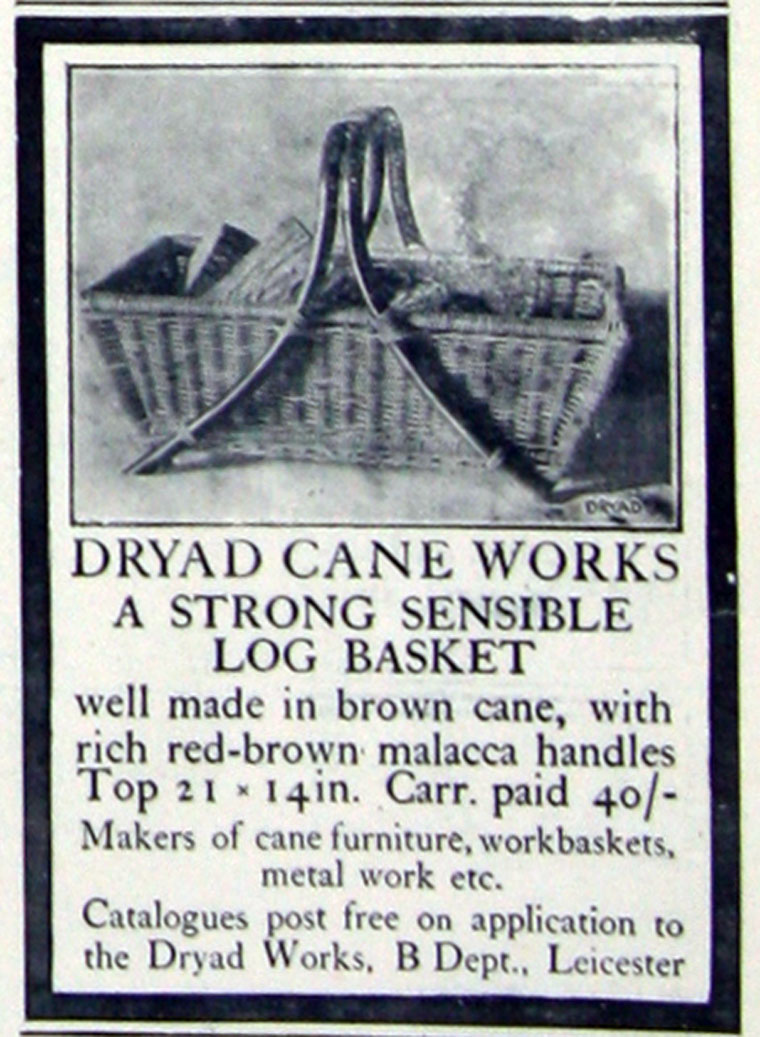 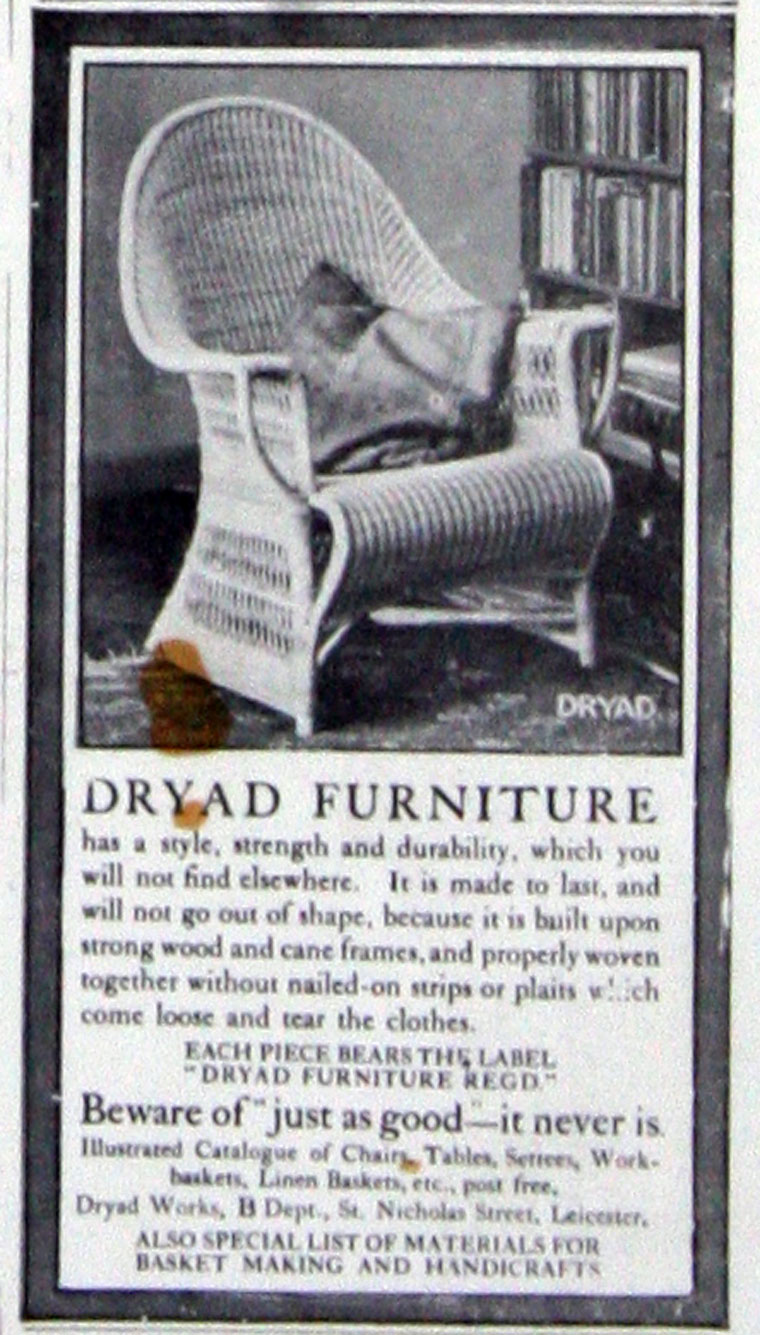 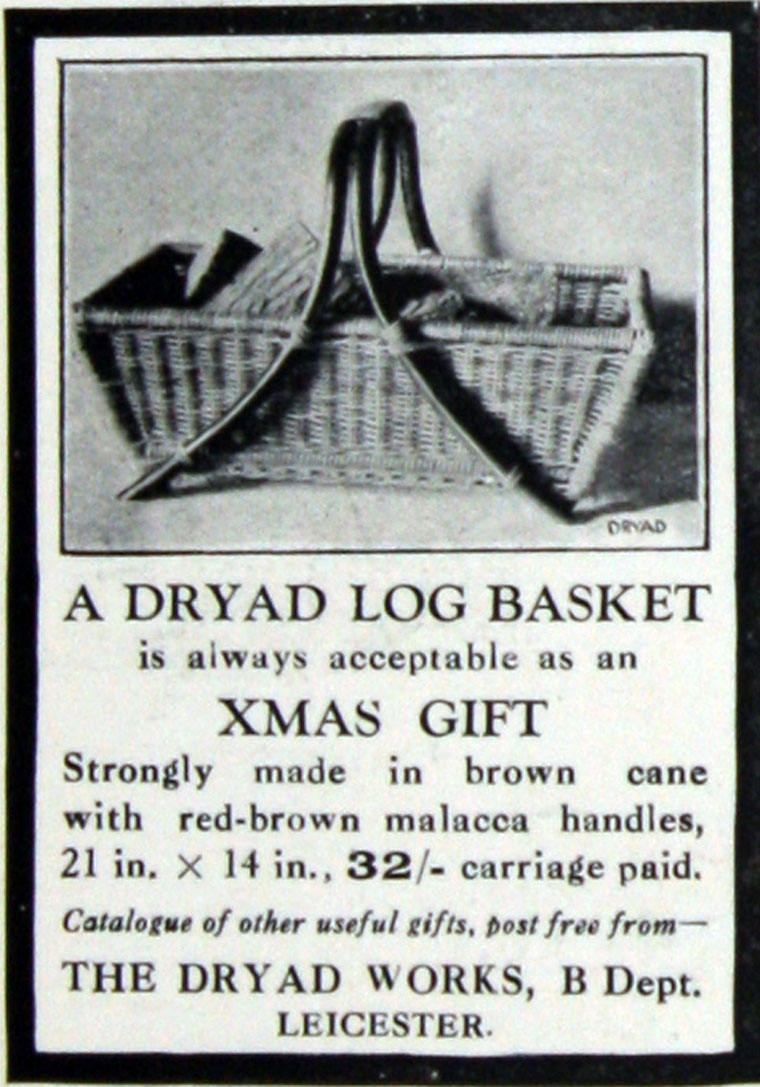 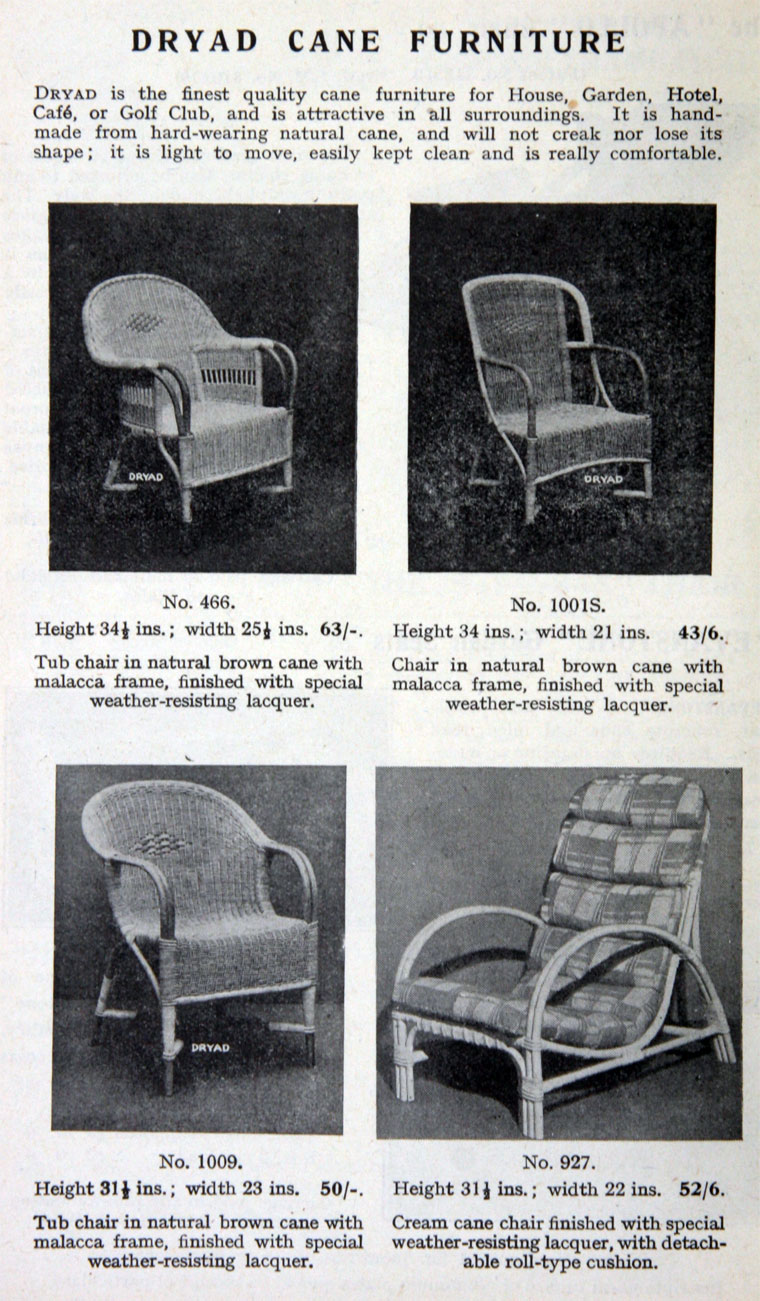 Harry Peach was a man of vision, conviction and action. He wanted to get things done, to make the world a better place, initially through politics and then through design reform. He was a businessman and an activist who involved himself in numerous local and national issues including politics, design, education and the environment. He came to appreciate how these different strands were interconnected and how small successes could generate larger-scale improvements for society. He spent most of his life in Leicester and, although he travelled widely, the city remained the focus of his enthusiasm and energies.

Cane furniture was still seen as a novelty in early twentieth-century Britain. It was partly to counteract this that Dryad cane furniture was given names redolent of a romantic English past. Peach also ran an effective advertising and publicity machine, working closely with retail stores, magazines and exhibitions. Furniture was available by mail order and even supplied overseas to Japan, USA and South America.

1874 Harry Hardy Peach was born in Toronto, Canada. His family settled in Oadby, Leicester when he was three years old. His father, who came from a Nottinghamshire drapery family, decided to return to his Midlands roots. After a brief period working as an estate agent with his father, he set up as a bookseller specialising in manuscripts and early printed books. His love of literature and appreciation of good quality printing lasted throughout his life. He also realised that good quality printing was an effective tool both for his business and other interests.

Benjamin Fletcher, of Leicester School of Art, became a close friend. He introduced Peach to the writings of William Morris and William Lethaby.

1906 When Peach was forced to give up bookselling, because of his deteriorating eyesight, it was Fletcher who helped him to establish the first Dryad enterprise – cane furniture.

1907 Dryad was set up in February, with Peach as the proprietor and Fletcher as the chief designer. By the end of the year 30 designs were in production made by four men in a workshop at the back of Peach’s Belvoir Street premises.

1911 The firm employed over 50 workers. The following year it moved to large new premises in St Nicholas Street, Leicester. The success of Dryad encouraged rivals to imitate its approach and new businesses to set up in competition.

During the First World War, Peach became involved in the Design and Industries Associatione (DIA), in its attempt to raise the standard of design of everyday goods. He also extended his approach to design reform by campaigning on environmental issues. His focus was Leicester and the surrounding countryside but the impact of the work was much wider. The Dryad Works provided a Leicester hospital with off-cuts of cane for basket-making by wounded soldiers.

1918 Peach set up another offshoot of his business, Dryad Handicrafts, to supply the growing demand for cane and other craft materials for use in occupational therapy and in schools. He was convinced of the importance of craftwork in education but only if standards were high. He wanted to encourage the teaching of handicrafts in schools and elsewhere and to try and raise standards of amateur work by selling good quality materials and tools selected by professional makers. Under Peach’s direction, Dryad Handicrafts developed a network of resources including a range of well designed and informative leaflets written by practising makers and teachers. The firm also produced pattern sheets, information folders, cards and charts available through mail order catalogues. Demonstrations and summer schools were held at Dryad and some staff also ran classes for Women’s Institutes, schools and colleges throughout the country. Dryad Handicrafts’ showroom was at 42 St Nicholas Street Leicester. Crafts from all over the world including Czech glass, colourful kitchenware from Germany and Poole Pottery (see Carter, Stabler and Adams) were on sale.

1928 A second showroom in London was opened.

1936 Dryad Handicrafts was the largest supplier of handicrafts in the world. Peach died in 1936, having suffered bouts of neuritis throughout his life and increasing periods of ill health through the 1930s. Dryad was run by George Hackett, with Peach’s eldest son Geoffrey, while his younger son, Roger, took over Dryad Metal Works.

The Handicrafts collection continued to be used by Dryad until 1969, when in was presented to the Schools Service of Leicester Museum.

1972 Reeves and Sons acquired Dryad Ltd of Leicester, a firm dealing in art and craft materials, by means of an agreed share offer