Grace's Guide is the leading source of historical information on industry and manufacturing in Britain. This web publication contains 137,279 pages of information and 220,134 images on early companies, their products and the people who designed and built them. 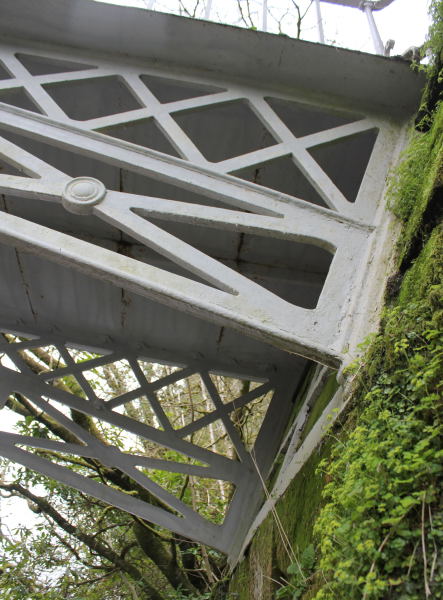 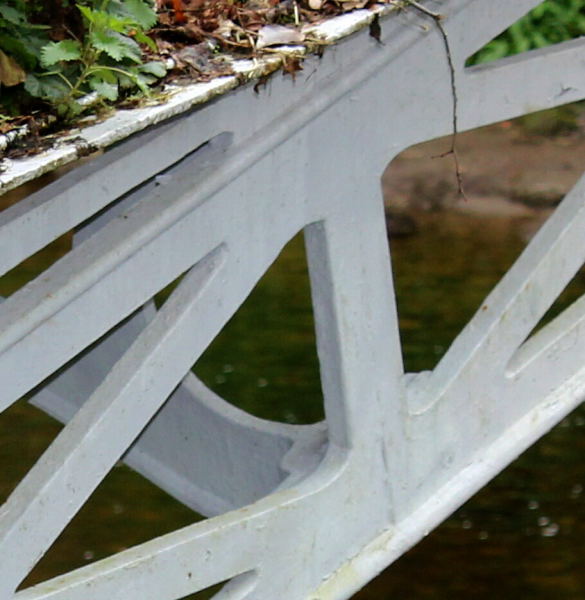 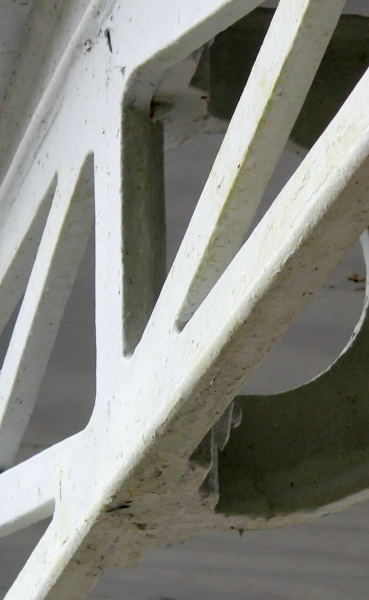 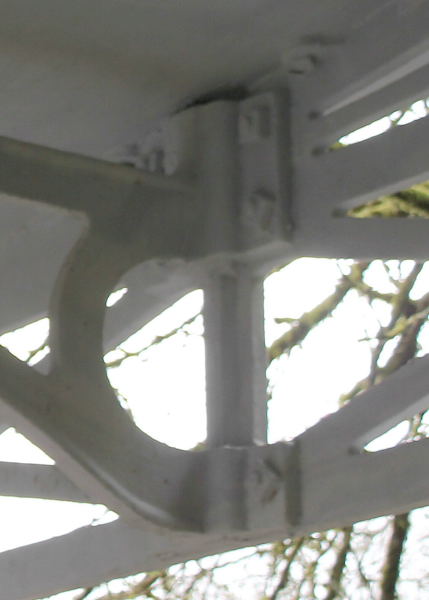 An exceptionally fine and elegant iron footbridge of 104 ft span over the River Esk, serving Langholm Lodge on the Buccleuch Estate and erected in 1813. The castings came from a foundry in Workington. The bridge is said to have been designed by William Keir, junior, Director of Works on the estate, but clearly needing considerable input from foundry specialists. The quality of the work of the patternmakers, moulders, fitters and blacksmiths, seen in the iron castings and the wrought iron balustrades, appears to be of the highest standard.

The bridge is a short distance north west of Langholm Academy, accessible via a riverside footpath.

An appreciable number of individual castings were assembled to produce the bridge. It seems to have been a badge of honour amongst cast iron bridge builders that the various joints should be as discrete as possible. They don't come much more discrete than those on the Duchess Bridge.

Breaking the ironwork down into its main components:-

Arch Ribs, or Voussoirs: There are two of these. Each has an arching top and bottom chord, and the space between them is braced with radial members and diagonal cross members between the radials. Each of the two ribs is assembled from 10 or 11 individual castings. Each of these comprises a segment with top and bottom chord, three radial bars, and two diagonal crosses. The segments are butted together to form the complete rib.

Spandrels: On a bridge, the filling between the voussoirs and the deck is called a spandrel. Here, the spandrels have a lattice pattern. Although they appear, even on close scrutiny, to be integral with the voussoirs, they are actually separate castings, bolted to the deck plates and carefully bedded to the arch ribs, and discretely bolted to the ribs. A lug is just visible behind the latticework spandrel in Photo 7, and can be seen more clearly from underneath the bridge (Photo 8).

Deck Plates: These are thin, flat cast iron plates, bolted to the spandrel castings as can be seen in Photo 8.

Cross Members: These are nicely-shaped iron castings bolted to the pairs of arch rib segments (the X-braced panels). They provide considerable transverse stiffness and also serve to join pairs of arch ribs together. This is done in two ways: using bolts, whose nuts can be seen in Photo 13; more subtly, the ends of the segments incorporate dovetailed ribs, which mate with dovetail grooves in the ends of the cross members. This is best understood by reference to the sketches in the CANMORE link. Although the nuts can be seen in Photo 13, it is not obvious how their bolts are attached. In a later era studs might well be fitted in threaded holes tapped in the castings, but this method was avoided as far as possible in the early 19th century. In this case it is most likely that the bolt heads, emerging on the outside of the X-braced panels are countersunk, so as to be nearly invisible on the outside. This was a common practice in bridges of that era, the countersunk heads being square.